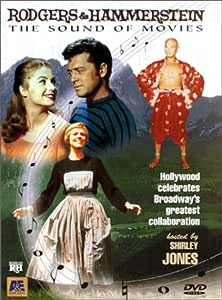 Sure, everyone's seen The Sound of Music, but how about Flower Drum Song? Or State Fair, either the 1945 version (a remake of a 1933 nonmusical) or the 1962 re-remake with Bobby Darin, Ann-Margret, and Pat Boone? Rodgers & Hammerstein: The Sound of Movies is a comprehensive and entertaining 97-minute documentary surveying the film career of the beloved songwriting team and how their screen work was interwoven with their stage work. (State Fair was written directly for the screen before they began adapting their stage shows for film.) Host Shirley Jones (the ingenue in both Oklahoma! and Carousel) provides numerous trivia tidbits on most of the films, while segments on The King and I, Flower Drum Song, and The Sound of Music are presented by those who appeared in them: Rita Moreno (Tuptim), Nancy Kwan (Linda Low), and Charmian Carr (Liesl), respectively. Also of interest will be original casting possibilities (James Dean in Oklahoma!, Marlon Brando in Carousel), rarely seen outtakes, live television performances, and clips from films that inspired Rodgers and Hammerstein's shows (including Rex Harrison as the king of Siam). Because Rodgers and Hammerstein's films were deeply involved in the development of widescreen techniques such as CinemaScope, this documentary is savvy enough to present its clips in letterboxed widescreen format, but that footage is occasionally grainy. Unfortunately, The Sound of Movies was filmed in 1995, four years before the release of sumptuous remasterings of six of these featured films. --David Horiuchi