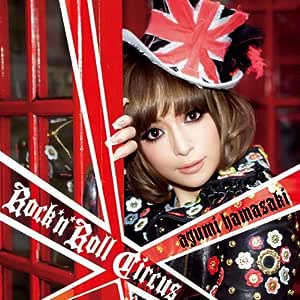 No.8 Don't look back

No.13 meaning of Love

Alexander P. Browning
5つ星のうち3.0 A decent listen, but not necessarily Ayu's most enjoyable work.
2016年8月6日にアメリカ合衆国でレビュー済み
Amazonで購入
As somewhat of a fan of J-pop back in my high school and college days, I decided to pick up this album from a recognizable performing and kind of get back into it a little for old time's sake. For whatever reason though, this wasn't quite what I expected.

Despite the name, there isn't alot of what one would consider traditional Rock and Roll on this CD. It's more electric pop then rock with way too many slowdowns in the album....which is a little sad because when Hamasaki decides to go a more rock oriented route the songs are always catchy and fun, like they where in her My Story album. While that is a shame, there are a few good songs on here but nothing that really struck out. Of songs I can easily recall, track 8 (Don't Look Back) is the only one that I could feasibly see myself humming.

But, as with all music, it really depends on what you're looking for. There are preview videos on Youtube that give you a good sense of what you're getting (Like this one: [...]) so if you're not one of those who loves to listen to an album blindly you can sort of get a feel of what this sounds like.

But in my opinion, for the price, it's a pretty decent purchase and if you really like Ayumi Hamasaki you probably will like this fine. But that said, if you are trying to get into her work for the first time (Or even J-pop in general) I recommend getting one of her Best collections, or if you want a (much) cheaper alternative either the aforementioned My Story for the more fast paced side of her or Rainbow for the slower, ballard like side of her.
続きを読む
役に立った
フィードバックを送信中...
フィードバックをお寄せいただきありがとうございます。
申し訳ありませんが、お客様の投票の記録に失敗しました。もう一度試してください。
違反を報告
レビュー を日本語に翻訳する
すべてのレビューを参照します
Amazonプライム会員ならお急ぎ便、日時指定便が使い放題
さらに、映画もTV番組も見放題。200万曲が聴き放題 。クラウドに好きなだけ写真も保存可能。
> プライムを無料で試す