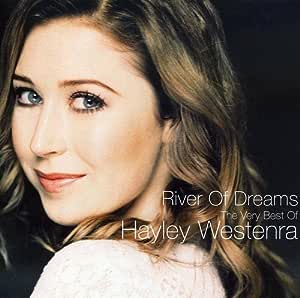 River of Dreams: Best of

2008 compilation from the New Zealand soprano. From her 2003 debut Pure to 2007's Treasure, this collection highlights the talent and versatility of one of the most recognized voices in modern classical music. Hayley spent her childhood immersing herself in music and theatre. She studied violin, piano and ballet and had appeared in forty amateur stage musicals in Christchurch by the time she was eleven. Since then, she's wowed audiences all around the world with her wonderful voice. Featuring 'Ave Maria', 'Danny Boy', 'Amazing Grace' and 'Never Say Goodbye'- this is a must for all fans. Universal. 2008.

2008 compilation from the New Zealand soprano. From her 2003 debut Pure to 2007's Treasure, this collection highlights the talent and versatility of one of the most recognized voices in modern classical music. Hayley spent her childhood immersing herself in music and theatre. She studied violin, piano and ballet and had appeared in forty amateur stage musicals in Christchurch by the time she was eleven. Since then, she's wowed audiences all around the world with her wonderful voice. Featuring 'Ave Maria', 'Danny Boy', 'Amazing Grace' and 'Never Say Goodbye'- this is a must for all fans. Universal. 2008.

Media Scribe
5つ星のうち5.0 Hayley Westenra of the pure voice
2017年1月22日に英国でレビュー済み
Amazonで購入
Here we have a soprano with a wonderfully pure voice and with such a rich diverse collection comprising 17 tracks there is something for everyone. Even the popular opera aria 'O Mio Babino Caro' is performed with great aplomb with which many an opera star would be content. In fact the purity of her voice is such that at least one of her versions( on her first released CD) I have never found equalled never mind surpassed. Other gems to watch out for here are the Bach/Gounod 'Ave Maria, 'May it be', 'Danny Boy,' 'The Water is wide' and so on. In particular, I would single out the 'Ave Maria' because this requires precise voice control which many would find a daunting challenge but not Hayley.
続きを読む
2人のお客様がこれが役に立ったと考えています
違反を報告
レビュー を日本語に翻訳する

Seichan
5つ星のうち5.0 The best board by which it is possible to enjoy the vocal of hayley until 21 years old sufficiently
2017年5月13日に英国でレビュー済み
Amazonで購入
This album is the typical best album of Hayley in the United Kingdom.
There are some best albums in Japan, too, but it is possible to enjoy this album sufficiently as the unique best board in this.
17 pieces of music interest of the selection from the 16 year-old debut to nearly 21 years old is obtained.
It will be the fact of her preferring to classic crossover's of becoming in this way when gathering music with various types.
It is wealthy in the variety, the singing ability, too, is enough and doesn't make it be really tired.
Since sale of the best board in Japan in 2014, an album isn't sold though.
I want for this album not to become the last best board.
I want you to take out a new album by all means.
続きを読む
違反を報告
レビュー を日本語に翻訳する

John Davis
5つ星のうち5.0 Terrific CD only let down by the record company glitch
2010年9月3日に英国でレビュー済み
Amazonで購入
I came round to Hayley Westenra via a very obscure route. One of the saturday paper supplements had a 'what ever happened to ...' feature and this week it was Neil Reid who had a hit in the early 70s with 'Mother of Mine'. I checked Youtube and sure enough it was there but also listed was another version by a singer called Hayley Westenra. To say I was knocked out by Hayley's version would be an understatement (incidently her version is on an album of Japanese songs Vol 2 I think - it costs a fortune!).
I spent an evening running through Hayley's various performances and wondered how I had missed such a good singer. As for the CD it's a lovely collection showcasing both her classical credentials and a beautiful lilting voice on songs such as 'Danny Boy' and 'Shenandoah'
The 'sleeve notes' feature various photos of Hayley meeting famous people and her enthusiatic and charming comments remind you just how young she is.
The one black mark on this CD is a mix up with the tracks. On the version I got the printed cover and the tracks match, however pop this into your PC and the media player will tell a different story, the tracks from number 5 onwards have the wrong titles so if you rip the CD to your portable music device you will have to rename most of the tracks. I think this mix-up may have been caused by different tracks being used on the compilation in different countries. I am assuming that this error has been picked up now and future versions will be fine. In any event I won't mark the CD down for a technicality when the songs themselves are so beautifully delivered.
続きを読む
2人のお客様がこれが役に立ったと考えています
違反を報告
レビュー を日本語に翻訳する

Clarinda
5つ星のうち5.0 Brilliant Collection
2011年6月1日に英国でレビュー済み
Amazonで購入
This is a really good introduction to Hayley for those who have not heard her work before and a great collection for long term fans like myself. This CD really displays Hayley's talent, it has a wide range of styles incuding folk songs such as 'Shenandoah' and 'The Water is Wide' and the immortal 'Pokarekare Ana'. It also includes covers of pop songs such as 'Both Sides Now' and an amazing duet with Andrea Bocelli 'Dell'Amore non si sa'. Hayley can really do any style she does them all really well and this CD really shows how versatile she really is. There are a few new ones on here 'Songbird' is a great Eva Cassidy cover, I love how it is arranged, kept very simple with just a piano. Also there is 'Po Atarau/Now Is The Hour' which is half maori and half english, again this is a simple, but impressive arrangement and I love to hear Hayley sing in maori.
続きを読む
違反を報告
レビュー を日本語に翻訳する

J. Harvey
5つ星のうち5.0 Entrancing
2010年2月4日に英国でレビュー済み
Amazonで購入
The choice of tracks for a "best of" album is bound to be somewhat subjective and I was tempted to give this only four stars because some of my favourites are not included. However, there is a good selection from Hayley's three previous UK albums and I like them all. Also the three new songs are spellbindingly beautiful. (I hadn't realised that Now is the Hour was a Maori tune.) So I will not be putting away my other Hayley albums, but I have been listening to this one in the car. This presents two problems: the first (relatively minor) is that the tracks don't follow on in the order that I have come to expect; the second is that I find myself waiting in the car when I reach my destination to listen to "just one more track" (or two, or....). It hasn't made me late for anything yet, but there is a real danger!
続きを読む
違反を報告
レビュー を日本語に翻訳する
すべてのレビューを参照します
Amazonプライム会員ならお急ぎ便、日時指定便が使い放題
さらに、映画もTV番組も見放題。200万曲が聴き放題 。クラウドに好きなだけ写真も保存可能。
> プライムを無料で試す