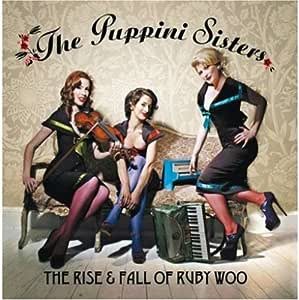 The girls (Marcella Puppini, Kate Mullins, and Stephanie O'Brien) are back with their trademark fusion of 1940's harmonies and modern day pop. The Rise & Fall of Ruby Woo, the second outing for The Puppini Sisters, features an energetic and clever combination of 40's swing standards, current pop hits, and original compositions. And where does Ruby Woo fit into this dynamite collection? Ruby Woo is nothing less than one of the glamorous trio's favorite shades of lipstick! The disc features 5 original songs and includes covers of 'Walk Like An Egyptian' and 'Crazy In Love'. 13 tracks. Verve Records. 2008.

M. Dowden
5つ星のうち5.0 A Solid Album
2019年7月17日に英国でレビュー済み
Amazonで購入
The sun is out, it is nice and warm, so what could be better than sitting back with a drink, and taking in some music that you enjoy? First released in this country back in 2007, this was the second album by the girls.

Marcella Puppini, Kate Mullins and Stephanie O’Brien (who has now left and been replaced by Emma Smith) showed us that they were not just a one album group with this, and of course now other subsequent albums. Unlike their debut album, which was really concentrated on old covers, this album, which does also feature them also has more contemporary songs as well, with a Forties style makeover, plus some original pieces.

With wonderful harmonies, and some inventiveness this is still great to listen to and relax with. You can feel the more relaxed and confident vibe that the girls have here after their initial success. And if like me you are a male and wonder who Ruby Woo is, it is the name of a lipstick and one of those famous women who wears it is the lovely Dita Von Teese. There are really some great tracks on this that are worth listening to.

Mr G H Koren-Browne
5つ星のうち5.0 HIGHLY ENJOYABLE ARE THE PUPPINI SISTERS - I LOVE THEIR STYLE AND THEIR RENDITIONS.
2017年6月16日に英国でレビュー済み
Amazonで購入
Super great I first saw these on Jonathan Creek and then researched why I did not know of this talented group! Well i do now and i have not stoped playing their albums.

Fantastic close harmony and great singing! Listening to them yes you are taken back to the Andrew Sisters, The Chordettes, The Dinning Sisters The Barry Sisters etc.

Subsequently I have bought all the albums I could find of these rising stars in this genre !
続きを読む
違反を報告
レビュー を日本語に翻訳する

MR P.
5つ星のうち4.0 Smile - It's catching!
2009年6月17日に英国でレビュー済み
Amazonで購入
A right proper laugh. Bought this without hearing anything off of it, and it plays well on first listen and only gets better. A critic could, with some justification, argue that this is cynical, and at times very clumsy, but that would be overlooking the sheer joy and refreshment that comes from listening to something new (ok, retro), fun, and bright in these days of U2's arrogance, Coldplay's dirge and awful, awful RnB. Difficult to pigeonhole - If you like Voice of the Beehive, the B52's, or the Andrews Sisters, you'll love this. If you don't then buy it anyway as you'll be converted. Standout track - Soho Nights. I don't give out 5 star reviews as a rule, but I admit I was tempted.
続きを読む
違反を報告
レビュー を日本語に翻訳する

H B Pensl
5つ星のうち5.0 The Rise and Rise of the Puppini Sisters!
2008年3月13日に英国でレビュー済み
Amazonで購入
I've listened to this album a lot since I bought it. I bought it because I loved the first album and, after seeing them live in 'Borders' in London, I thought there really was something special about them; something different and exciting from the norm.
So I was a little disappointed in reading some of the reviews about the second album - but I thought I'd give it a whirl; who knows, I might be surprised. I am so glad I ignored the negative reviews! This is a really good album! If you are not one to be hooked by the latest trends and enjoy trying something different; music with a great melody and a style and delivery that will put a smile on your face, then try this. I fail to see how the comments regarding sound quality have arisen and can only think that those making the comments must have had a duff CD. My album sounds crisp, bright and clear - everything you would expect from a quality recording. If you are not sure the Puppini Sisters' style of music is for you, there are plenty of free downloads. I recommend you listen to some of their work; and hope you enjoy this second album as much as I.
続きを読む
7人のお客様がこれが役に立ったと考えています
違反を報告
レビュー を日本語に翻訳する