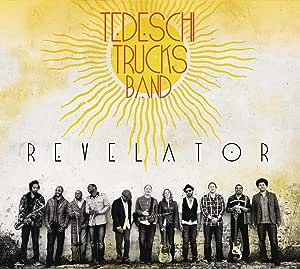 1. Come See About Me

9. Learn How To Love

11. Love Has Something Else To Say

Long-awaited 2011 debut album by the husband-wife team of singer/guitarist Susan Tedeschi and guitarist Derek Trucks. Filled with smoky, blues-dipped rockers and heart-stilling ballads that show off, respectively, the gutsier and softer side of Tedeschi's vocal ability, plus a series of emotive, story-telling solos shaped by Trucks's uncanny agility on slide-guitar, Revelator also serves to introduce the couple s new, 11-piece ensemble Tedeschi Trucks Band. A dramatic leap forward for two of the music world's most dynamic performers, Revelator is a confident yet unforced triumph offering a cohesive vision: an idyllic, musical world in which the echoes of so many great traditions Delta blues and Memphis soul, Sixties rock and Seventies funk organically flow together, blending with an entirely original, modern sensibility.

S. Lornie
5つ星のうち5.0 Great debut album
2017年10月4日に英国でレビュー済み
形式: CDAmazonで購入
Revelator, is the debut album of the married duo Derek Truck and Susan Tedeschi. The two accomplished musicians put their heads together alongside a vast array of musicians to form the Tedeschi Trucks Band. Soulful bluesy rock group that has one of the smoothest sounds I have heard in a long time.

The curse of being a married couple in a band does not seem to take effect for this group. Revelator, is an extremely solid piece of work that shows both leading musicians in the peak of their career with some wonderful guitar work from both Derek and Susan, the latter also has a beautiful voice. One that is put to good use as she sings with a lot of feeling. The music itself is a bit of a mixed bag of styles ranging from the kind of mellow blues rock that The Allman Brothers Band were known for, but mixing it up with more folk, soul and some funk every now and again.

The overall tempo of the album is quite laid back with great use of melody over the top of some superb grooves performed by the bands dual rhythm section of Tyler Greenwell and J. J. Johnson. These two, alongside bassist Oteil Burbridge provide all the other musicians plenty of room to breath. The tracks that stuck out to me were, Come See About Me, Midnight In Harlem and the extremely catchy, Bound For Glory. Each track had melody where it needed it, a hard rhythm where it was required and a solo or two when it needed that extra something. The only thing I would have liked to have heard was a little more variety in terms of tempo. One or two short rock n roll numbers would have helped the momentum a little, but that really is a minor gripe.

I really enjoyed this album and it actually convinced me to buy the rest of the catalogue. I see a lot of promise in this band. It is a group of great musicians with fantastic chemistry. They know what they do well and they're doing it here. Revelator, is a great album that I wish I had discovered sooner.

oldandintheway
5つ星のうち5.0 Soul Full
2011年6月10日に英国でレビュー済み
形式: CDAmazonで購入
After reading the other reviews I wasn't going to bother, but I've been playing it all day and this record is so good. There is no filler - just music that hits your soul from beginning to end. I don't do track run downs but a couple get special mention, at least for today. It will be others tomorrow. 'Midnight in Harlem' should become a classic. I could listen to it forever and will never tire of it. Susan's voice is sublime on this, and Derek's playing as good as everything he does. And the rest of the band are no slouches. A fantastic ensemble piece. Then there's Learn How To Love. Really dirty guitar that put me in mind of Hound Dog Taylor at the start, then riffs Jimmy Page would only aspire to. I say that because you could imagine (well, I could) Led Zep having a crack at this, but Robert Plant would never reach into the soul like Susan Tedeschi does. But this is no guitar rock album. It's blues and rhythm and soul. Wonderful stuff.
続きを読む
38人のお客様がこれが役に立ったと考えています
役に立った
フィードバックを送信中...
フィードバックをお寄せいただきありがとうございます。
申し訳ありませんが、お客様の投票の記録に失敗しました。もう一度試してください。
違反を報告
レビュー を日本語に翻訳する

David
5つ星のうち5.0 Another fine album from Derek Trucks - now with Susan Tedeschi
2011年7月28日に英国でレビュー済み
形式: CDAmazonで購入
Torn between 4 and 5 stars for this review.

Derek Trucks has made some fine albums (check them out elsewhere on amazon) and he has a superbly fluid style with the guitar. On this album the style moves on yet again - with some delicious interplay with Susan Tedeschi and the rest of the very fine band - and it deserves to be aa huge success. File it under blues / rock / soul as you see fit - its a cracking good album.

The catch is that there is one obvious area for improvement, which is - at the risk of starting a domestic... - the vocal range.

I have to agree with the reviewer who said that Susan Tedeschi's vocals are quite ... edgy and energetic, or even "rough". Sometimes this works (eg the opener, come see about me) and on some tracks she sings in a gentler more melodic style (shelter, midnight in harlem). But elsewhere - it grates. And it grates even more if you know DT's earlier albums, and you've heard the vocals on them (Mike Mattison is the lead singer) - very soulful and melodic. You can hear him on harmony vocals on this CD too.

R Raybould
5つ星のうち5.0 Must have album.
2019年7月8日に英国でレビュー済み
形式: CDAmazonで購入
Brilliant fromstart to finish, every track excellent but Midnight in Harlem is the standout for me. Great playing and singing, Mike Mattison is the "unsung hero" here. Derek Trucks is probably one of the top 5 guitarists alive today.
続きを読む
役に立った
フィードバックを送信中...
フィードバックをお寄せいただきありがとうございます。
申し訳ありませんが、お客様の投票の記録に失敗しました。もう一度試してください。
違反を報告
レビュー を日本語に翻訳する

Mark4x4
5つ星のうち5.0 Fantastic
2011年7月25日に英国でレビュー済み
形式: CDAmazonで購入
This is such a "Cant put down or switch off" Album.....Utterly fantastic.
I saw them perform together on the "Clapton Crossroads 2010" DVD.
I also saw them perform at the Royal Albert Hall, as they guested with BB King back in June. So I thought I should give them a listen.
The album is fantastic, with just a couple of "album fillers".You know what I mean. But the 2 band merge with 2 drummers works well. Tadeschi vocals are a mellow soulful blues which are fantastic and trucks slide guitar has an excellent phrasing quality.

hornet
5つ星のうち5.0 Simply Revelatory!
2011年10月5日に英国でレビュー済み
形式: CDAmazonで購入
In common with the opinion of most other reviewers, this is a first class 'debut' album. Susan Tedeschi sounds not unlike Bonnie Raitt and the tight arrangements accommodate the eleven piece ensemble in polished arrangements. Hubby Derek Trucks' guitar phrasing demonstrates both his ability and justified claim to Duane Allman's slide guitar crown. As a bassist myself, the low tones of Oteil Burbridge are economical and tasteful - in short I'd love to play in this band! Anyway, I digress - genuine americana is alive and well in this, a great album.
続きを読む
役に立った
フィードバックを送信中...
フィードバックをお寄せいただきありがとうございます。
申し訳ありませんが、お客様の投票の記録に失敗しました。もう一度試してください。
違反を報告
レビュー を日本語に翻訳する

Sioux
5つ星のうち5.0 A Must Have!
2012年9月27日に英国でレビュー済み
形式: CDAmazonで購入
Having stumbled across The Tedeschi Trucks Band on you tube, I decided to purchase this album....
What can I say.... Great individual sound that provides a listening delight, they manage to combine various musical genres that come together beautifully....
If you have a broad taste in music, buy this album....
You WON'T be disappointed!
続きを読む
役に立った
フィードバックを送信中...
フィードバックをお寄せいただきありがとうございます。
申し訳ありませんが、お客様の投票の記録に失敗しました。もう一度試してください。
違反を報告
レビュー を日本語に翻訳する

Tony M.
5つ星のうち5.0 Fantastic blues - soul
2013年3月19日に英国でレビュー済み
形式: CDAmazonで購入
I just love this album. I bought it, having listened to Joe Bonomassa play tracks on his Sunday radio show. I had never heard of these guys before. This album really is fantastic, "Midnight in Harlem" is pure soul to me and stands alongside the best. I am now going to look into their back catalogue, to see what other hidden gems I can find.
続きを読む
役に立った
フィードバックを送信中...
フィードバックをお寄せいただきありがとうございます。
申し訳ありませんが、お客様の投票の記録に失敗しました。もう一度試してください。
違反を報告
レビュー を日本語に翻訳する
その他の国際レビューを読み込む