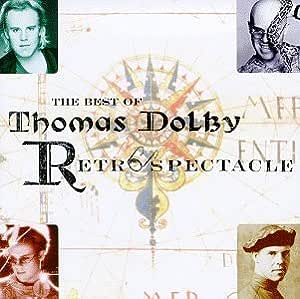 Science ! One of the biggest stars of early MTV gets his due on this 16-track "best-of," which includes She Blinded Me with Science; Europa and the Pirate Twins; Hyperactive; Airwaves (7" version); One of Our Submarines , and more.

Tim Kidner
5つ星のうち4.0 Eccentric '80's Synth Pop.....
2012年3月19日に英国でレビュー済み
Amazonで購入
Played this on my Ipod the other day, ripped from this CD and I was really pleasantly surprised how many commercial, poppy and catchy songs there were on it. Dolby has a homely voice but beefs that up with surprising and infectious lyrics.

His definite plus is his instrumental backing - usually busy and always interesting, with a wide range of almost everything. I agree with other reviewers as to which are the best tracks, though there aren't any that I'd call bad, which is not the norm for many Best Of compilations.

I bought his debut album The Golden Age of Wireless as a teen on vinyl when it came out and I played it a lot. Then, not heard of or anything by him for 20 years until buying this Retrospectacle CD. Brought back some happy memories and some nice nifty tunes.
続きを読む
役に立った
フィードバックを送信中...
フィードバックをお寄せいただきありがとうございます。
申し訳ありませんが、お客様の投票の記録に失敗しました。もう一度試してください。
違反を報告
レビュー を日本語に翻訳する

ODH
5つ星のうち5.0 Get this for Leipzig if nothing else, you won't regret it
2017年4月21日に英国でレビュー済み
Amazonで購入
I saw Thomas Dolby in 1984 in the Hacienda in Manchester. It was a great show, but somehow I never really stuck with him. So I bought this as a bit of a nostalgia thing really, mostly for Wind Power and Hyperactive. But some of the tracks I wasn't familiar with have blown me away (Leipzig in particular).
続きを読む
役に立った
フィードバックを送信中...
フィードバックをお寄せいただきありがとうございます。
申し訳ありませんが、お客様の投票の記録に失敗しました。もう一度試してください。
違反を報告
レビュー を日本語に翻訳する

Marv0
5つ星のうち5.0 Great artist, great cd.
2017年7月25日に英国でレビュー済み
Amazonで購入
What a great artist, great tunes and wacky pop vidoes. Love the synth pop. I was always torn between Thomas Dolby and Howard Jones but they were both talented artists. Favourite tracks are
Europia and the pirate twins
Windpower
I scare myself
She blinded me with science
Leipzig
Hyperactive
続きを読む
役に立った
フィードバックを送信中...
フィードバックをお寄せいただきありがとうございます。
申し訳ありませんが、お客様の投票の記録に失敗しました。もう一度試してください。
違反を報告
レビュー を日本語に翻訳する

The remainder of RETROSPECTACLE - basically everything that followed THE GOLDEN AGE OF WIRELESS - is bland and forgettable. Indeed, rather than emphasizing musical progression, this compilation merely demonstrates diminishing returns and creative atrophy.

Debut album THE GOLDEN AGE OF WIRELESS was, almost certainly, Dolby's very own CITIZEN KANE. Infectious, challenging songs from a mad professor of music, with his self-built at-a-tangent synthesizer and a similarly skewed pop sensibility. It worked perfectly, the whole package. But just the once. On the first go. He peaked - and from then on...well, you can hear what happened afterwards for yourself.

So why review RETROSPECTACLE? Ah, because there's two wonderful treats, not to be found elsewhere: URGES and LEIPZIG. The A and B sides of Dolby's earliest solo releases. Plaintive, Bowie-esque, vocals and a low-key, verging on sparse, production endow both songs with a power way beyond their modest intentions. Only the brilliant FLYING NORTH comes anywhere close to recreating that initial burst of atmospheric genius. And guess from where that song hails?

Five stars for six songs out of a total of sixteen. It doesn't make for a very persuasive calculation on paper. But scratch the surface and you'll discover that even low strike rates can have significant merit. And because he's still around, Thomas Dolby deserves the critical plaudits.