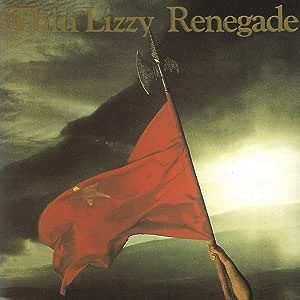 Blew1
5つ星のうち3.0 One of Lizzy's less loved albums. Messy, a bit here there and everywhere, but still has some of Lizzy's best songs ever!
2015年1月22日に英国でレビュー済み
形式: CDAmazonで購入
Although this is collectively one of Thin Lizzy's most inconsistent records full of songs that don't really flow as well as other albums do, it's packed with some truly brilliant tracks!
'Angel Of Death' sounds like a mash-up of Pink Floyd and Iron Maiden before they were really Iron Maiden! The song seamlessly bounces from psychedelic, heavily processed, mellow guitar to a galloping triplet heavy metal riff. Superb.
'Renegade' follows in the same mellow / rocky interchange, and whilst is a bit repetitive, is a great song.
'The Pressure Will Blow' is the more traditional Lizzy song, filled with harmony guitars and rocky riffs. Sadly, there isn't more tracks like this on the album.
'Hollywood' is up there as Lizzy's heaviest track ever along with 'Emerald' and 'Cold Sweat' and is a great, swaggering, groove-laden heavy rock song with huge vocal lines. A live version on the 'Greatest Hits' collection sounds much better than this version however.
The trio of 'Fats,' 'Trouble Boys' and 'Memory Pain' are a bit of a departure and are basically, blues, jazz and almost soul style songs. 'Mexican Blood' is another track that's quite different. While this shows the band are adept at many different styles, it does sound a bit randomly thrown together and does highlight a real lack of coherence and planning for the album. They were at their drug-fuelled low point around this time.
The other songs are ok, but a bit by the numbers and aren't very memorable.
There are a few justified reasons however why this album isn't the Lizzy's most celebrated. A few of the songs are a bit over-indulgent. The title track for example is at least a good minute too long, not that it's a bad song or has a lot of filler, it's just that there is an awful lot of repeats of the verse section, which, interestingly is cut in the 'Edited Single' version of the song which is a bonus track and is probably better.
Also, much has been made of Snowy White's contribution to the band and that he doesn't really 'fit in' to the Lizzy guitarist mould as greats such as Brian Robertson, Gary Moore and even John Sykes after him. The guitar sounds a bit forced sometimes, which perhaps reflects Snowy White's difficulty in getting this style of rock down to a tee, after all, he's a more mellow, ex-Pink Floyd guitarist than a hard-rocking Lizzy lick machine! He still does a good job however, and this is probably the band's second heaviest album after 'Thunder and Lightning.'
The penultimate Thin Lizzy studio album isn't kindly looked upon by many and while it does pale in comparison to classics like 'Jailbreak,' 'Bad Reputation,' 'Black Rose,' 'Fighting' and even 'Thunder and Lightning,' it does deserve it's place in any Lizzy fans collection as there are many brilliant, under the radar, 'lost' classics here which you should treat yourself to hearing!
続きを読む
12人のお客様がこれが役に立ったと考えています
役に立った
フィードバックを送信中...
フィードバックをお寄せいただきありがとうございます。
申し訳ありませんが、お客様の投票の記録に失敗しました。もう一度試してください。
違反を報告
レビュー を日本語に翻訳する

Mr P Barry
5つ星のうち4.0 Release that has aged well
2013年10月18日に英国でレビュー済み
形式: CDAmazonで購入
Renegade has a number of tracks up to standard, "Angel of Death", "Pressure will Blow", "Hollywood" and the title track. It includes interesting stuff like "Fats" and a bit of filler, but this re-issue includes the (rather average) single "Trouble Boys" and its superb moody "B" side "Memory Pain", dominated by Snowy White's guitar solo, which is a major plus.

The influence of Darren Wharton's keyboards can be felt on a couple of tracks, particularly "Angel of Death", which opened the set when the album was toured.

In my opinion it has aged well in comparison to the record that followed it and would surely have benefitted from the "live" BBC in Concert disc recorded on the "Renegade" Tour and for some reason attached to "Thunder & Lightning".

Mr grumpy
5つ星のうち4.0 Pressure Will Blow..or may be not
2013年10月30日に英国でレビュー済み
形式: CDAmazonで購入
Being a big Thin Lizzy fan I was eagerly awaiting the last few deluxe edition releases for the Lizzy back catalogue. I was disappointed to find that this was just a single disc and the extra tracks were alright but more demo versions would have been welcome on a second disc. Yes the sound is better and we should be grateful that Lizzy material is being re-released but come on Scott lets have some more live Cds and DVDs this is where Thin Lizzy excelled. However for the price I suppose we shouldn't complain.
続きを読む
役に立った
フィードバックを送信中...
フィードバックをお寄せいただきありがとうございます。
申し訳ありませんが、お客様の投票の記録に失敗しました。もう一度試してください。
違反を報告
レビュー を日本語に翻訳する

Mr. DM Griffiths
5つ星のうち3.0 Neither rabble nor rebel
2017年12月22日に英国でレビュー済み
形式: CDAmazonで購入
As an album, probably the weakest of the 12 they made, although it still managed to provide a couple of the band's live stalwarts.
Excellent by anybody's standards, just a bit below par for Lizzy. Still a good album though.
続きを読む
役に立った
フィードバックを送信中...
フィードバックをお寄せいただきありがとうございます。
申し訳ありませんが、お客様の投票の記録に失敗しました。もう一度試してください。
違反を報告
レビュー を日本語に翻訳する
その他の国際レビューを読み込む

lee jones
5つ星のうち3.0 Excellent quality and prompt delivery
2015年11月11日に英国でレビュー済み
形式: CDAmazonで購入
Excellent quality and prompt delivery. However it was not the re-mastered version I was expecting. The re-mastered version I wanted was with the double gate (simulated LP) card cover with photos. This is similar to all the other re mastered first versions I have. I am disappointed!
続きを読む
2人のお客様がこれが役に立ったと考えています
役に立った
フィードバックを送信中...
フィードバックをお寄せいただきありがとうございます。
申し訳ありませんが、お客様の投票の記録に失敗しました。もう一度試してください。
違反を報告
レビュー を日本語に翻訳する

Eleanor Hamilton
5つ星のうち4.0 Under-rated
2014年8月4日に英国でレビュー済み
形式: CDAmazonで購入
My favourite band's most unsung album. I thought this was a big step up from Chinatown with Lynott rediscovering his poetic whimsical touch. Angel of Death is the only song of theirs from after Bad Reputation that I'd put in my top 20. Should be rediscovered.
続きを読む
2人のお客様がこれが役に立ったと考えています
役に立った
フィードバックを送信中...
フィードバックをお寄せいただきありがとうございます。
申し訳ありませんが、お客様の投票の記録に失敗しました。もう一度試してください。
違反を報告
レビュー を日本語に翻訳する