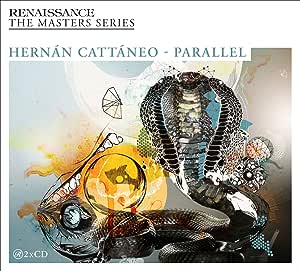 Renaissance celebrate the release of their 50th album with one of their favourite acolytes, Hernan Cattaneo. There were only a handful of candidates to handle Renaissance's 50th album milestone, but perhaps none more suited than Hernan Cattaneo. His previous entries into the series have established themselves as true classics, giving rise to calls, emails, even PM's to the Renaissance office imploring us to re-secure the talents of the legendary South American. Add in the heightened anticipation of the fact it's Hernan's first compilation in two years and the stage is well and truly set, perfectly echoed in a recent post by one avid member of a dance message board, 'Damn, this is a 'must have' And Hernan has clearly risen to the challenge. Working alongside various friends and producers from around the world he blurs the lines between artist album and compilation by including no less than 12 of his own originals, edits and remixes within the 29 strong, 2CD track list. "You've got to distinguish a compilation in this digital age," he says, "It's important fans and listeners feel they're getting a unique mix, elevated beyond a standard club set. I hope this comes across with the album, it's the product of many sleepless nights, hours in the studio and a lot of care and passion." Looking to the wider selection it's clear Cattaneo hasn't rested on his laurels as he features some of the brightest luminaries from the scene, taking in James Zabiela, Danny Howells, Guy Gerber, Timo Maas, Skylark, Guy J, Henry Saiz, plus many more, all segued by his flawless mixing style; yet another timeless addition to Hernan's body of work and the Masters Series.