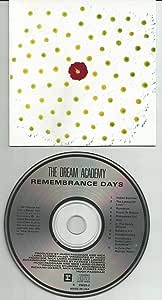 EarGoggles
5つ星のうち5.0 Peripheral information for serious fans.
2004年2月20日にアメリカ合衆国でレビュー済み
Amazonで購入
This is a great Dream Academy album, and with every listen I'm able to appreciate more of it. I'm not here to review it though. I wanted to let any serious fans of the Dream Academy know about two other projects that might be of interest. The first is "The Invisible Circus" film soundtrack--still available used here at Amazon. This was released around 2000, and the instrumental score (about 7-10 tracks) was composed by Nick Laird-Clowes. A few other Laird-Clowes originals are included under the guise of his recent band, Trashmonk. While the instrumental score tracks are fondly reminescent of the Dream Academy's folkish melodies, the Trashmonk songs are decidedly less relaxed (and didn't appeal much to me personally).
The other CD I wanted to note here is by a producer/DJ who goes by the name of Dario G. His CD, "Sunmachine," which is also available here at Amazon, is best described as pre-millennium electric anthems. It sounds a little like the music from Chicane's "Behind the Sun," only less trance-inflected. At any rate, the first track on "Sunmachine," is Sunchyme. This is only relevant on account of the song's base melody which derives heavily from Dream Academy's Life in a Northern Town, right down to the genuine inclusion of the chorus "Hey-oh-ma-ma-ma's." The original DA song isn't sampled quite enough for this to be a remix, but at the same time, Sunchyme contains so many elements of Life in a Northern Town, that it can't really be considered an altogether separate song. Anyone who might have heard this featured on a TV commercial for contact lenses a few years ago can now exhale. I, for one, am sleeping better now that I've found its source. The rest of Dario G's CD isn't bad either...given its age.
I hope this encourages someone out there.

Garry Ford
5つ星のうち5.0 50 Minutes of Pure Musical Bliss!!
2015年1月20日にアメリカ合衆国でレビュー済み
Amazonで購入
This is some wonderful music here! I am discovering all of the songs of the Dream Academy after I purchased the Retrospective cd. Their music is so beautiful and relaxing! The only song I remember was (Life in a Northern Town) , I was not aware they released 3 cds.

This cd is out of print so it can be quite expensive, I got a mint copy for under 10 bucks , Search and you will find! If you are a fan of the Dream Academy or are looking for some really great music you cannot go wrong on this little treasure, ENJOY!!!
続きを読む
1人のお客様がこれが役に立ったと考えています
役に立った
フィードバックを送信中...
フィードバックをお寄せいただきありがとうございます。
申し訳ありませんが、お客様の投票の記録に失敗しました。もう一度試してください。
違反を報告
レビュー を日本語に翻訳する
その他の国際レビューを読み込む