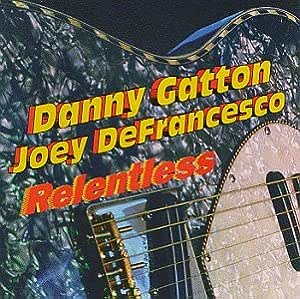 Maryland's Danny Gatton was best known as a rockabilly cat, the man who put blistering guitar licks behind the likes of Robert Gordon, Billy Hancock and Delbert McClinton. Like his heroes Les Paul, Lenny Breau and Hank Garland, however, Gatton is both a country picker and a solid jazz man; he stole the show on a Blue Note jam session with Joshua Redman and Roy Hargrove on New York Stories in '92. Gatton kept both careers going at once; Cruisin' Deuces (1993) was a rockabilly outing, while his duet album with Philadelphia organist Joey DeFrancesco, "Relentless," is a straightahead jazz project. One pursuit reinforces the other; Gatton's jazz playing brings a harmonic sophistication to his rockabilly work, and his country experience gives his jazz solos a dramatic flair. --Geoffrey Himes

Scott Hedegard
5つ星のうち5.0 Absolutely jaw dropping and beautiful jazz album
2016年5月11日にアメリカ合衆国でレビュー済み
Amazonで購入
As much as I love the music of Danny Gatton, for some reason, probably practicing my schizophrenic music tendencies, I was not looking for any material after his terrible suicide. Many musicians record more music than was released, and others get the same stuff rehashed with new photos or gimmicks and little else to add to the catalogue. Stevie Ray Vaughan was very much exploited after his own tragic death, with rehashes all over the place. Some gems did get out, like "The Sky is Crying" and "In Session", the TV special he did with blues legend Albert King in Hamilton, Ontario shortly before "Texas Flood" was released.
Hendrix, the Doors, and many others have been scavenged over the years, too.
Danny Gatton was not nearly as well known, outside D.C., and from guitar players who knew just how absolutely great he was, and while we do have some post mortem releases, it doesn't appear that he will get the retread treatment. I hope that's the case, but I'm glad a few CD's have come out. Especially "Relentless". Gatton had participated in a stellar project in 1993 called "New York Stories" with Yuron Israel, Roy Hargrave, Bobby Watson and himself in a horns/piano/guitar jazz ensemble that still ranks as probably my favorite jazz album, as I used to groove to it going back and forth about 60 miles to see my then-fiance and now wife.
"Relentless" followed, this time with his long time superb rhythm section of John Priviti and drummer Timm Riedi, and featured the astonishing Hammond organ player Joey DeFrancesco in another jazz set, but this time with lots more trade offs between the two and his trademark Telecaster sound, where on "New York Stories" I believe he used a hollow body electric at certain times. That's all academic. What we get with "Relentless" is an almost ridiculously perfect album blending damn near every genre outside of metal or hard core country, and of course rap. Danny considered jazz his fail safe, and despite having several albums already, I was astonished with this CD.
You just cannot fathom how he managed to absorb so many styles and make it his own sound, and deliver it with technique and real emotion. DeFrancesco is a perfect foil, who, just being 23 at the time of the recording, is a master organ player and is as exciting on his instrument as Gatton was on his.
"Kindred Spirits" is the album's tour de force as far as I'm concerned. Here we have a beautiful chord progression that sends chills up your spine and intricate playing by the entire band showing they were as good as it got, period. There are a few bluesy vamps, with guitar licks that cannot be described in written language. The album closes with a Thelonius Monk tune "Well You Needn't", and showcases John Priviti on a jaw dropping double bass. Of course, he and Timm both excel throughout, as one would have to in the company of Gatton and DeFrancesco.
All Gatton and jazz fans, and just plain guitar nerds alike really should buy this CD. It is possibly his last work done while he was alive, making it more poignant. Gatton could have been the greatest all around player second only to Chet Atkins himself. His death prevented him from putting in the time that would have earned him the title as Atkins' equal. Do not pass this CD up.
続きを読む
9人のお客様がこれが役に立ったと考えています
違反を報告
レビュー を日本語に翻訳する
すべてのレビューを参照します
Amazonプライム会員ならお急ぎ便、日時指定便が使い放題
さらに、映画もTV番組も見放題。200万曲が聴き放題 。クラウドに好きなだけ写真も保存可能。
> プライムを無料で試す