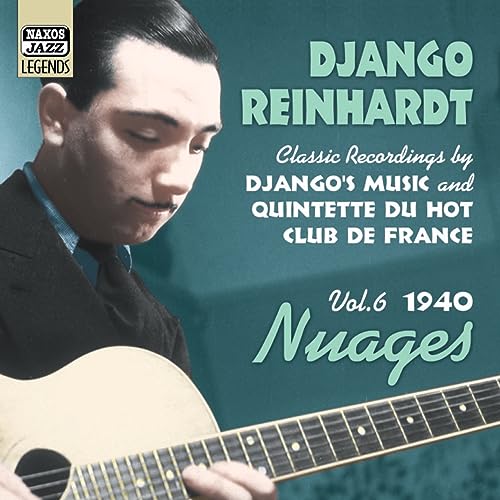 Bang for the buck: 4 stars

If you're like me, you think of Django Reinhardt accompanied by high speed gypsy-sounding melodies joined by Stephan Grappelli on violin and other string instruments. Only 6 of the tracks here (on CD1) are accompanied by Grappelli. Rather, most of the cuts are from the early 40's after the Django and Stephan parted ways. On most of the tunes (about an even mix of standards and originals) Django is leading bands, Hot Club of France & Django's Music, most nearly always including Alix Combelle playing clarinet and/or alto and/or tenor sax, along with a bassist, drummer, and varying other horns (but nearly always featuring a lead on clarinet). A kind of refined but swinging European elegance with Django's guitar way up front and grounding the mid-tempo rhythm with his relentless chugging. The variety, despite several repeated tunes, makes this an upbeat and engaging listen through all 4 CDs. Standouts include: 2 versions of the old traditional "Les Yeux Noirs" (one small, one large group), 2 nifty versions of "Begin the Beguine", and a "Festival Swing" with 4 bands, 25 musicians all hewing to the Django beat.

Sound quality is above average for these Quadromania disks. Noise-free with good midrange sound and a clarity that allows each instrument to be heard. There's no discernable reverb, but high frequency response is poor and that dimishes the scintillation of Django's guitar and the snap of the horn sections.

The otherwise well designed CD case fails because the teeth that should hold the disks let go during travelling or handling, and are easily broken. The documentation gives recording dates and musician names for each track, but no biographical or other information.
続きを読む
13人のお客様がこれが役に立ったと考えています
違反を報告
レビュー を日本語に翻訳する

D. Powers
5つ星のうち4.0 Good Introduction to Django
2015年1月23日にアメリカ合衆国でレビュー済み
Amazonで購入
I haven't listened to any Django until I purchased this CD. This is a good sampler of his prime period work. I bought it because it has two tracks from the famous recordings with Coleman Hawkins & Benny Green. I definitely appreciate & understand why Django is considered such a good jazz guitarist now that I've listened to these tracks. It's a good 1st purchase. Sound is excellent.
続きを読む
違反を報告
レビュー を日本語に翻訳する
すべてのレビューを参照します