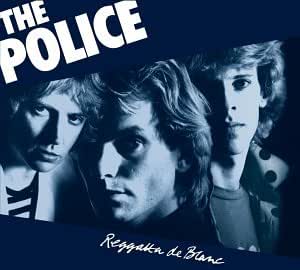 The Police's second album sees them maturing away from their riding on the coat tails of new-wave/punk vibe - although they retain that youthful effervescence of energy - as indicated by the artier monochrone cover photos. As people doubtless know or can easily guess, the album's title, whilst both carrying on and mutating the Francophone wordplay trip of their debut, also hints self-consciously at one of the notable aspects of their musical magpie tendencies.

Of the two big hits, Message In A Bottle and Walking on The Moon, it's the latter that most overtly displays the 'white reggae' feel alluded to in the albums name, thanks particularly to Summers' skanking offbeat guitar and Stewart Copeland's jazzy/proggy, but still minimal, take on reggae drum rhythms. Sting's vocal melody and bass playing on this excellent song stay in more mainstream rock/pop territory. But he shows that he can take a leaf from the reggae bible if he wants to, as the superb bassline to The Bed's Too Big Without You amply demonstrates.

Sting's contributions are, like an impressively large chunk of his catalogue, dependably solid. The aforementioned Bed's Too Big Without You, and the superb Bring On The Night, being, for my money, every bit as good as the two hit singles. This is also the Police album to which drummer Sewart Copeland contributes his biggest chunk of writing. As well as penning On Any Other Day, Contact, and Does Everyone Stare, he even sings the first of that trio. And surprisingly good his songs prove to be, by and large, albeit admittedly not up to the certified solid gold standards of Mr Sumner's Midas' touch. Perhaps this is why Copeland told Modern Drummer that, in his view, this was the best Police album!?

As with most Police albums, as well as the excellent pop songs, there are more unusual numbers, and even instrumentals. All three band members had more 'muso' credentials than the 'pop' category they're filed under suggests. Sting had been in jazz-fusion band Last Exit before joining Copeland and French guitarist Henry Padovani as the first incarnation of the Police. And Summers was the longest-toothed, having Pop and session work in his CV, and a penchant for art-rock weirdness that can make his compositions the least palatable of The Police's oeuvre.

Two of the tracks here would appear to originate from band jamming, whether in the studio or on tour I don't know. These are the title track and Deathwish. If you watch them performing this material, circa '79, the energy and joy of improvisation and group interplay are very clear. But such numbers are often better live than in the studio. So, whilst worth hearing, and not without their own merits, they're certainly not the album's strongest moments.

As good as Message In A Bottle and Walking On The Moon Are, and they're bona fide classics, Bring On The Night is even better, in my opinion. I also love The Bed's Too Big Without You, but Bring On The Night is, to my ears, perfect, musically and lyrically. Who knew solid gold Pop could be so dark and moody!?

Whilst all three musicians are not necessarily the most prodigiously talented in the world on their respective instruments, they are nonetheless top-drawer. And, far better than having the world's greatest chops but just ego-tripping, the sum of these three parts is wonderfully alchemical musical magic. Buddy Rich was unquestionably a more technically able (and showy*) drummer than Copeland, but the artistry of Copeland's hi-hats plus some judicious use of delay effect in Walking On The Moon are sublime, and I find myself going back to the Police for the pure pleasure and emotion of listening more than I reach for my Rich recordings.

I can certainly see why Copeland rates this as his preferred Police album, his playing on this disc is just fantastic. I love his snare groove on Beds Too Big Without You. The breakdown to just bass, drums and percussion is just brilliant. And even when The Police veer back towards their punkier moments, as on It's Alright For You and No Time This Time they bring something special and unusual to the mix. And, as a drummer, hearing the band sign off with some crazy intense fills from Copeland is the perfect way to end a near perfect album. Brilliant!

Chris
5つ星のうち5.0 Genius New Wave Reggae
2016年9月14日に英国でレビュー済み
Amazonで購入
I recently replaced my vinyl copy of this, and other Police albums, with CDs. It's just like a trip back in time. I spent the day playing each album, going "Oh yes, this is my favourite track", "Oh, no, *this* is my favourite...."

Ms. Joanna F. Dalietos
5つ星のうち5.0 Fabulous tracks from Sting and the boys
2014年5月28日に英国でレビュー済み
Amazonで購入
Vocally Sting is at his best on this album and the songs are strong too. Great lyrics and some of The Polices best hits. A classic album which has stood the test of time and will remain a classic for many years to come.
続きを読む
6人のお客様がこれが役に立ったと考えています
役に立った
フィードバックを送信中...
フィードバックをお寄せいただきありがとうございます。
申し訳ありませんが、お客様の投票の記録に失敗しました。もう一度試してください。
違反を報告
レビュー を日本語に翻訳する