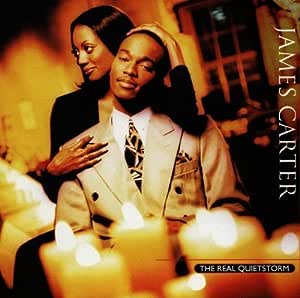 [Note: This product is an authorized, licensed CD and is manufactured on demand]

Louis P.
5つ星のうち5.0 You'll play this over and over
2018年8月12日 - (Amazon.com)
形式: CDAmazonで購入
Round Midnight is the first song. On baritone. You will startled if you thought Miles did it prettiest. The way it's performed might convert those who aren't yet hip to jazz to realize that if don't get this song, they won't get any songs. But this song screams to me. I don't see how anybody can live without this cd.
続きを読む
2人のお客様がこれが役に立ったと考えています
レビュー を日本語に翻訳する

Case Quarter
5つ星のうち5.0 maybe it's the baritone
2007年3月14日 - (Amazon.com)
Amazonで購入
i remain overwhelmed by james carter and everyone i know who has heard his music feels just about the same way. maybe it's just that growl he has or the sound he gets from his baritone, a sax few reed players favor. without question he has his own style and historically he's so deep in jazz that listening to him is taking a trip in a time machine.

and then there are those other saxes he plays. on this recording he plays baritone on round midnight when just about everyone else has played it on tenor. he pulls out his tenor for you never told me that you care, and does a riff of when sonny gets blue that makes the song worth the price of the cd. and 1944 stomp by don byas, how many tenor fans even know the name byas these days? for the byas selection, carter performs on soprano. i could go on.

and what about craig taborn, what jazz piano style can't he play? and dave holland on bass?

i had given this cd 4 stars, but i changed it to 5 stars.
続きを読む
10人のお客様がこれが役に立ったと考えています
レビュー を日本語に翻訳する

Dan C.
5つ星のうち5.0 "MASTER OF ALL TRADES,NO ROOM FOR JACK"
2015年9月25日 - (Amazon.com)
形式: CDAmazonで購入
Bari,Tenor,Soprano,Bass Clarinet,Bass Flute. Every instrument is Played full and strong with great tone and of course with some nuances here and there where it count's and equal to his talent,the rhythm section. This Jazz Cd is a must! I hope there's a QUIET STORM 2. All great composition's. "IT'S ALL HERE!!!"
続きを読む
2人のお客様がこれが役に立ったと考えています
レビュー を日本語に翻訳する