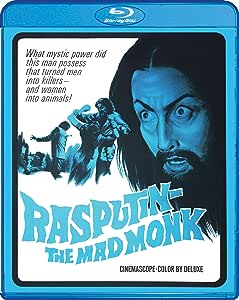 Joe Russo
5つ星のうち5.0 Chris Lee is Mad!
2017年10月30日 - (Amazon.com)
Amazonで購入
Love this movie. Chris Lee is excellent as The Mad Monk. Has all the great production values that Hammer is know for. The transfer is crisp and clean with great color.
続きを読む
2人のお客様がこれが役に立ったと考えています
レビュー を日本語に翻訳する

David Beckham
5つ星のうち5.0 Man, I love thiz taype!
2014年6月5日 - (Amazon.com)
Amazonで購入
Guess what? I bought this vhs tape. Saw the DVD price said "2 rych 4 mi blud" ($21.00: i'm not makin Starbucks money here, kidz!) Guess what else? The cover makes him look like Bangladesh era George Harrision (it's not about The Beatle) but it's not about George "Cheer Down" Harrison, it's about this guy who helps this chick and then DEMANDS that her father (an inn keepr) supply him with a woman to rape! That's what I got out of it. Was I watching it? This is a great Sickle horror movie, not quite on the level of a Wrench Horror Production. Actually better than a Mallet Horror Production. Actually better than a wrench. Anyway, one of my favorite Chris Li movies. It's actually really handsomely photographed (i've only seen the movie as a series of set photographs) and definitely better than Kiss of The Vampire, which is a terrible movie or anyway it has a terrible ending (most of it is pretty cool actually. That ball scene seems like it influenced Eyes Wide Shut and Batman Returns, probably not) . It's a five star movie, legit. Very good
続きを読む
1人のお客様がこれが役に立ったと考えています
レビュー を日本語に翻訳する