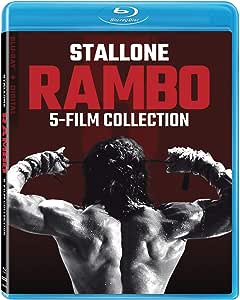 I had an assumption before I bought this that this set was a "frankenstein" collection and I was right. This new set for 2020 includes previously released blu ray discs from over the past 10 or so years. If you have some of the older "complete collector sets" you will likely want to hang on to them for the additional special features that they have because many are missing here. But here is a list of the special features on the Rambo I - III found on this new set:

The disks for Rambo (2008) and Last Blood probably have most if not all of the special features that were already available.

Probably the biggest stand out is the Rambo (2008) disc. We only get "Disc 1" as stated on the disc art and there is no inclusion of the extended cut of the film so if you have that blu ray you'll also need to keep it.

The discs (especially Last Blood) is fraught with Lionsgate promotions that you have to skip through - Last Blood has 11 minutes of them.

I think the pictures I've provided really explain what you're getting. I'm giving this 5 stars but if I could I would give it 4.5.

If you just need the 5 Rambo films on blu ray this is the set for you but if you're looking for a blu ray set with every special feature EVER.....you'll have to keep waiting.

Jason
5つ星のうち5.0 Awesome collection
2020年2月17日 - (Amazon.com)
Amazonで購入
This is a great way to get the Rambo 5-Movie Collection. It's reasonably priced and compact with all of the discs being held in one single case instead of each disc having it's own case.
続きを読む
レビュー を日本語に翻訳する
Amazon.comのカスタマーレビューを見る(2) 5つ星のうち5.0
Amazonプライム会員ならお急ぎ便、日時指定便が使い放題
さらに、映画もTV番組も見放題。200万曲が聴き放題 。クラウドに好きなだけ写真も保存可能。
> プライムを無料で試す