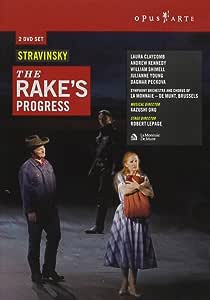 J. R. Allum
5つ星のうち5.0 Amazing New Production
2008年1月7日に英国でレビュー済み
Amazonで購入
An outstanding, imaginative and well thought-through production by Robert LePage. Set in the America of Picture Post and the Ford Edsel, the attention to detail and the staging are excellent and some of the effects quite breath-taking. (Look out for the inflatable caravan!)

Rising star Andrew Kennedy is particularly impressive as Tom Rakewell, and his performance reaches its climax in the asylum scene. A brilliant performance in a brilliant production

G P Padillo
5つ星のうち5.0 A Blazing New Rake!
2008年8月7日にアメリカ合衆国でレビュー済み
Amazonで購入
I just finished this absolutely captivating production of Stravinsky's "The Rake's Progress" from Brussel's Théâtre de la Monnaie, in a thrilling production sure to rattle some cages by director Robert Lepage and can't find enough good things to say about it.

Lepage has moved the opera up to the 1950's - the era in which Stravinsky composed the opera (and for some well thought out reasons), and set it in the American West. Taking advantage of the state of the art projection equipment available today, the curtain rises on a breathtaking view of an oil field that somehow combines George Steven's classic motion picture "Giant" with the Trevor Nunn production of Oklahoma, with Anne and Tom stretched out on a blanket declaring their love. When Shadow appears, he rises from the ground beneath an enormous, ever pumping, oil derrick - and is black - covered head to toe in Texas tea.

The next scene London is transformed into a movie set and the derrick has turned into a director's boom/jib with Shadow riding high above the action calling out through a megaphone. Mother Goose is transformed into a Marlene Dietrich styled brothel madam and when Tom takes her they sink beneath the stage taking miles of pink satin sheets with them leaving a giant heart-shaped bed, and a bar room brawl. With Stravinsky's music - it all seems to work perfectly!

When Anne races to rescue Tom, it is in a little red convertible sportscar, windshield wipers going and Anne's silk scarves blowing in the wind until carried off on a life of its own. Projected images speed by and she even makes a few hairpin turns, and the images filling the stage around her slow down into the city's streets. It is nothing short of dazzling showmanship - I can't recall anything quite like it. She arrives at a movie theatre complete with Hollywood searchlights and a marquee emblazoned with "Baba the Turk and Tom Rakewell - a Nick Shadow Production." The scene is at once, hilarious and infinitely touching.

Later, we find Baba and Tom lounging poolside, Baba taking a dip, Tom reading Variety with the hilarious headline "Gloria Swanson to star in Sunset Boulevard" (next to that is an opera review!). The entire thing here has a "Sunset Blvd." feel entirely appropriate to the proceedings.

The scenes primarily involving Tom and Nick have a lovely, eerily sinister feel to them, the first taking place before Tom's trailer on the movie set (a hilarious bit of scenery change that provokes laughter from an otherwise fairly staid audience) ... Tom is partially dressed in what appears to be a Cassanova costume, the stars are twinkling, his ego is raging and evil is afoot. It's brilliant.

Vocally things could hardly be better. Andrew Kennedy - all milkfed faced and slightly smarmy charm makes this Rake's "progress" all too believable. His arias are dispatched with a gorgeous, liquid old-school British lyric tenor sound that has just a touch of honey to it. Kennedy is not one of today's matinee idol tenors, and so to have him believing he's "all that" makes his journey all the more poignant. He's quite wonderful, really. His scene in Bedlam where he believes he is Adonis, is perfectly acted and sung with golden tone.

Quite simply, Laura Claycomb was born to sing Anne Truelove. Her voice is a mystery - at once light as a feather, but with a steel spine or core to it, there is an odd dichotmy of delicacy and strength that is entirely unique. She spins out these silvery high notes that float like gossamer - then she applies pressure to increase them to a size and volume not quite believable, but still entirely true to her sound. I'm grasping at words here, so, in a nutshell: she rocks. Her "No word from Tom" and the aria and cabaletta that follow are all of a piece, with an ease through the coloratura paces Stavinsky demands of her capping it all with a solid, ringing top C and - boy it's exciting! The scene where she discovers Tom's marriage to Baba - well, vocally and visually Claycomb, as, dejected and lost, she climbs back into her little red car - well, if she doesn't break your heart, you haven't got one. As good as she is in all of those scenes, it is when she returns to Tom in Bedlam that Claycomb's Anne shines brightest. That silvery, pure voice is now wedded to the heart of a woman who knows this love is lost and yet has nothing but compassion and tenderness to express. I think I've quite fallen in love with her. This is a remarkable performance.

Always a fan of William Shimell, I must admit to being just a bit surprised when he arrived on the scene for he looked remarkably like Jose van Dam - something I'd never noticed before. Shimell plays Nick Shadow to the hilt, the voice booming out nicely when called for, but more lyrical than many Shadows of recent vintage who seem to want to "boom" a lot more than really is necessary. All that Handel and Mozart singing shows nicely in this role. And what a great physical presence he is, agile and swift seemingly appearing out of nowhere. He's seductive, suave - even when dripping with black crude.

I was less excited about Dagmar Peckova's Baba - her heavily accented English and thick vibrato seeming to be a less than perfect match for Stravinsky's music, but she acts up a storm - in one of the more bizarre costumes to ever grace a stage (kinda creepy too).

The la Monnaie chorus and orchestra are led by their maestro (someone new to me), Kazushi Ono who gives a crisp, very classical feel to the score. The orchestra sounds wonderful and the chorus is quite amazing in all their music, particularly the Bedlam scene. Lepage's production is sure to cause a ruckus (it has) but for anyone who loves this opera as much as I do, this is a must have DVD of a thoroughly engaging, well thought out and immensely moving production. I loved every minute of it!

The disc is available from the OpusArte label and well worth owning.

(BTW - I cannot wait for Lepage to get his hands on the Met's new Ring. Some of the ideas I've read has been absolutely fascinating!)

Michael Birman
5つ星のうち5.0 The Rake's Vegas Trip
2008年2月29日にアメリカ合衆国でレビュー済み
Amazonで購入
Stravinsky's only full length opera created for La Fenice in Venice on 11 September 1951 marries his pastiche hommage to Mozart's number operas to a libretto written by W. H. Auden and Chester Kallman. Their libretto is an elegant response to a series of 18th Century prints by William Hogarth depicting the decline and fall of a young rake who winds up mad and destitute in London's famous hospital for the insane, Bedlam. Auden and Kallman cleverly 'sample' English literature by slyly quoting from writers such as Shakespeare and Fielding. The irony is compounded by accompanying 18th Century language with modern mid-20th Century music. The whole edifice is one of irony and pastiche: diluting that irony can be dangerous to the work's integrity. This production flirts with that, definitely walking a thin line, teetering occasionally but never quite plummeting earthward to its doom. It replaces Hogarth's sinful London with 1950's Las Vegas and Hollywood, substituting Hogarth's drawings with tableaux inspired by the early days of television. In the process, we must deal with a new irony: that of eliminating what once held the opera together and replacing it with 1950's music accompanying 1950's action, sets, costumes and sensibility. It is a tribute to the libretto and, especially, Stravinsky's masterful score that it works.

Stage director Robert Lepage and his set, image and costume designers have created an intriguing visual counterpoint to Stravinsky's score, which seems to be infinitely adaptable by nature. The drama flows organically right to the end, with few jarring moments (there are some). Elements of stage business are quite clever, such as Anne Trulove's road trip to Vegas in an MG, highway and scenery created by discrete rear projection. Film crews on colorful sound stages 'record' parts of the opera, adding additional layers of meaning. It is all done with style and cleverness. The cast is quite good. Andrew Kennedy sings a fine Tom Rakewell. Laura Claycomb is a strong yet vulnerable Anne. William Shimell, who rises out of an oilwell, his clothing covered in glossy oil when we first meet him, makes an effective Nick Shadow. Dagmar Peckova is an especially weird Baba the Turk, a study in orange feathers. The music is well played though not as forcefully as it might be. Kazushi Ono conducts The Symphony Orchestra and Chorus of La Monnaie-De Munt Brussels slightly on the diffident side. There are no major complaints, however. The opera was recorded in High Definition and looks great. Sound is in LPCM stereo and true DTS 5.0 surround sound and is state-of-the-art. There are some extras and a glossy booklet included. The running time of the two discs is about 174 minutes.

The clear first choice remains the 1975 Glyndebourne Festival production conducted by Haitink, with David Hockney's fantastic sets referring back to the 18th Century engravings by Hogarth. That production is one of the finest opera DVDs in the catalog. This new version makes for a nice second choice for those who love the Rake and would like to see a contemporary vision of the work. If you don't yet have the Glyndebourne set, available on an Arthaus Musik DVD, by all means get that one first. You'll appreciate this new one a whole lot more after you've seen that brilliant, more traditional production.

Chris Reich
5つ星のうち3.0 Won't Knock You Over
2016年4月21日にアメリカ合衆国でレビュー済み
Amazonで購入
I was looking for more of WH Auden in this---it's a rather basic, Americanized Faust story. The music isn't going to have you trying to sing along. There's a reason this isn't in the standard repertoire.

That said, this is probably as good as any production of this opera.