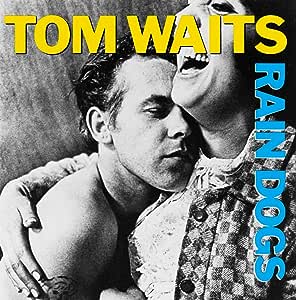 The middle album of the trilogy that includes Swordfishtrombones and Franks Wild Years, Rain Dogs is Waits's best overall effort. The songs are first-rate, and there are a lot of them--19 in all, ranging from grim nightlife memoirs ("9th and Hennepin," "Singapore") to portraits of small-time hustlers ("Gun Street Girl," "Union Square") to bursts of street-corner philosophy ("Blind Love," "Time"). The album also contains the original version of "Downtown Train," which Rod Stewart turned into a smash hit. The image of "rain dogs"--animals who've lost their way home because the rain has washed away their scent--is an appropriate symbol for the entire cast of characters Waits has brought to life over the years, and this album has thus far proved to be his most enduring effort. --Daniel Durchholz

Andrew Banks
5つ星のうち5.0 Tom Waits at his best.
2015年10月13日に英国でレビュー済み
Amazonで購入
'Rain Dogs' is probably my favourite Tom Waits album. It showcases his excellent song writing skills on tracks like the title number and 'Downtown Train'. It also benefits from the contributions from some very good musicians. William Schimmel plays accordion on a few tracks and Keith Richards from the Rolling Stones plays guitar on a couple of numbers, and they both make telling contributions to the music. The musical instruments used on this album include a banjo, a bowed saw and the aforementioned accordion. This gives the album a very distinctive sound quite unlike most of the other records from the mid-1980s, a time when a lot of recording artists were using synthesizers and drum machines.

Whereas David Bowie had enlisted the help of Nile Rodgers as his producer, and added a prominent disco beat to a lot of his songs at this time, Tom Waits steadfastly ploughed his own furrow. Some of the songs on this record would not be out of place in Kurt Weill's 'Threepenny Opera'. Although Tom has the benefit of some very good quality musicians here, including Marc Ribot on guitar and Robert Musso on banjo, Tom is still the undoubted star of the show. His gravelly voice has rarely sounded better, and his lyrics are full of shop soiled beauty.
続きを読む
4人のお客様がこれが役に立ったと考えています
違反を報告
レビュー を日本語に翻訳する

Aesir Inks
5つ星のうち5.0 A gateway Waits album
2019年12月28日に英国でレビュー済み
Amazonで購入
I don’t know when or how that I first became aware of Tom Waits. Perhaps the piano playing Rolph from the Muppets stirred something within. Maybe it was Waits brief appearance as a philosophical down-and-out in Terry Gilliam’s ‘The Fisher King.’ Perhaps Tom Waits has always been there lurking in my soul.
I don’t feel qualified to review the songs on ‘Rain Dogs’ except to say that they are sublime. How to review an album that is the musical equivalent of strong whiskey (or perhaps rough bourbon), with copious amounts of cigarettes? The more you indulge the more intoxicating the effect.
Tom Waits is a musician and poet of rare genius. If this is your first Waits outing, you will very probably want much, much more.
続きを読む
違反を報告
レビュー を日本語に翻訳する

Here's Johnny
5つ星のうち5.0 Wait's at his best
2016年1月17日に英国でレビュー済み
Amazonで購入
Tom Waits is one of those artists you either embrace or look the other way.
For me this is album represents his unique talent and take on life like no other.
19 tracks that conjure images of back alleys , sleazy bars and life through the bottom of an empty bourbon glass.
Like he once said ' it was do this or sell refrigeration for a living'.
If you have never heard of him before this is a superb introduction.
続きを読む
8人のお客様がこれが役に立ったと考えています
違反を報告
レビュー を日本語に翻訳する

Jason N. Frowley
5つ星のうち5.0 Great
2017年3月9日に英国でレビュー済み
Amazonで購入
Of the half-dozen truly great albums Tom waits has produced in his career, Rain Dogs may be the best and most accomplished - and the one that shows his ramshackle inventiveness to the best advantage. It's compulsory.
続きを読む
5人のお客様がこれが役に立ったと考えています
違反を報告
レビュー を日本語に翻訳する