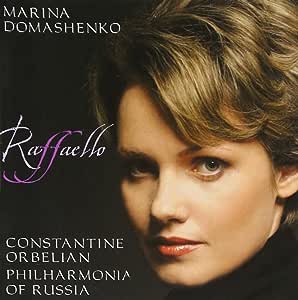 J. A. Peacock
5つ星のうち4.0 Arensky's vocal music proves to be quite a find...
2012年3月18日に英国でレビュー済み
Amazonで購入
Well this is an unexpected pleasure - I have always found some of Arensky's large scale works rather patchy in inspiration, particularly his symphonies but this short opera (lasting just over half an hour) is a real lyrical delight that deserves to be better known. Arensky's artistic development from a tentatively nationalist to a more cosmopolitan style is well known and there is nothing Russian about the music here (he even used an Italian language libretto originally, the version sung in this recording) but in this piece he seems to have tapped into a vein of flowing and very lovely melody that makes for an extremely satisfying listening experience. The off-stage street singer's song is familiar from many a Russian tenor recital and very lovely it is too; here, though, it occurs during a sensual and extended love duet and is even more effective in context. That duet forms the centrepiece of the work but there are also expressive arias for Raffaello himself and for the cardinal, the latter of which leads into a dramatic trio for the protagonists. The final scenes are really quite affecting with the closing chorus rounding events off sonorously and memorably. The orchestration throughout is understated but impeccable and highly suited to the tone of the setting and "drama".

The fill up tracks on the disc comprise a ten minute long aria from his cantata, "The Fountain of Bakhchisarai" (a fine piece too, no less impressive than the opera, and one that left me wanting to hear the whole work) and a selection of songs, their piano parts sensitively orchestrated for this recording by Walter Mnatsakanov.

Marina Domashenko has a rich, velvety mezzo voice as Raffaello (and in the extra items), which blends well with the soprano Tatiana Pavlovskaya as the painter's lover, Fornarina. Indeed, performances and sound quality are excellent all round. Full texts and translations are provided for all the works recorded.

I always assumed the best of this genial but second-tier composer's work was to be found in his chamber music but this disc (while not providing any undiscovered masterpieces admittedly) makes me wonder whether his vocal music is long overdue some reappraisal. There are two more operas and, as well as the aforementioned "Fountain of Bakhchisarai", various other choral works; on the basis of the contents of this disc, here's hoping we get to hear some of them soon.

Martin Pitchon
5つ星のうち2.0 Rafaello sung in Italian?
2007年3月8日にアメリカ合衆国でレビュー済み
Amazonで購入
Quite disappointing indeed. I had another version copied from a LP, in Russian, the sound is not that good...but in Italian (????!!!!) For what!