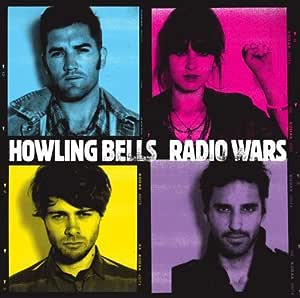 Limited two CD edition pressing of their 2009 sophomore album includes a bonus seven track live CD and beautiful additional artwork. If their debut could easily be the soundtrack for the beautifully haunted world of Twin Peaks, their sophomore effort would be their leap into the blockbuster mainstream. There's a formidable richness here, a glorious depth and maturity and growth which takes the Howling Bells' sound into hitherto unexplored terrain, aided, in no small part, by the expertise of producer extraordinaire Dan Grech-Marguerat.

Gannon
5つ星のうち3.0 Casualty Of Conflict
2009年3月23日に英国でレビュー済み
Amazonで購入
What made the eponymous debut great was its menacing blend of mildy gothic pop-rock and hints at alt.country. The debut was brooding and haunting, the sound was PJ Harvey enjoying a knees up with Josh Homme, the Cocteau Twins spinning in the background. In retrospective brutality, that debut has not aged well and sounds a little MOR in comparison to some of today's experimental and challenging luminaries. Yet, stand out tracks still stand out. The bombastic induce yawning indifference.

Radio Wars does not differ from this template. All that has changed is the ratio of pop to rock. Where previously Stein convulsed with meaning now she coos passively. Like the debut, Radio Wars' stand out moments appeal. `Cities Burning Down' welcomes back the trademark menace, the latter half of the title track is sinister melody embodied. `Into The Chaos' picks up where `Low Happening' left off, but is neutered in comparison.

The weaker tracks on the album are sadly bland to the point of banality. `Nightingale' is a cadent pop-rock piece, delivered lethargically. `Let's Be Kids' reintroduces the shoe-gazy element of the debut, vocally recalling the Cocteau Twins afresh, but it's a pity these lyrics are so trite. The musical backdrop is frustrating indie Muzak. `Golden Web' is an inadvisable and wistful duet, which embraces lost love against a spider and fly analogy.

Radio Wars is not a bad album, let that be clear. In fact, it is a lot better than initial listening suggests. The good does indeed outweigh the bad, but the so-so outweighs both. The problem with promise is sustainability. It is rare to achieve commercial and critical success and Radio Wars appears to have aimed to please the former rather than the latter. Only time will tell if the radio bites.

Randy Q. Cron
5つ星のうち4.0 Hauntingly Beautiful
2009年6月5日にアメリカ合衆国でレビュー済み
Amazonで購入
I recently attended a Coldplay concert, which, of course, was phenomenal. However, I got the bonus treat of being blown away by one of the "warm up" bands, Howling Bells. They can headline for me anytime. I can see why Coldplay (also Snow Patrol and the Killers before this tour) invited them on tour. Some of their hooks could certainly fit on a darker Coldplay CD.

Howling Bells most reminds me of Muse with their prominent driving percussion, excellent guitar work, and appropriately placed keyboard segments. The big difference is the hauntingly gorgeous voice of lead singer, Juanita Stein. Her voice is near perfect. She could make any song pleasurable.

"Radio Wars" is Howling Bells' second release. You can find several of their songs on YouTube. My favorites from the album include:

"Cities Burning Down" - Sounds like a Coldplay or Muse tune, but with Juanita's vocal cords at the helm.

"Nightingale" - As cornball as this may sound, the hand clapping beat is genius for this song (also worked well in concert). A song with a simple hook that draws you in.

While you're surfing the web, check out "Setting Sun" and "Low Happening" from their first album. I sure hope Howling Bells continues a climb to stardom providing us with audio treats like "Radio Wars" along the way. Maybe a 5 star CD would be nice. I can't quite give this album 5 stars; I reserve 5 stars for CDs like Natalie Merchant's "Tigerlilly".
続きを読む
4人のお客様がこれが役に立ったと考えています
違反を報告
レビュー を日本語に翻訳する

John W. Dunner
5つ星のうち3.0 Welcome to the machine.
2009年10月2日にアメリカ合衆国でレビュー済み
Amazonで購入
Singer Juanita Stein may evoke the Motels' Martha Davis, but whatever emotion she strives to bring to the mic is cinderblocked by the band's chilly arrangements and occasionally klutzy drum-machine programming (with the closing track's stuttering bass drum being the worst offender). Australia seems to breed inordinately creative bands (e.g., Midnight Oil, Crowded House, the Whitlams), but Howling Bells needs a bit more woodshedding on how to keep synthesizers sounding organic. Even Duran Duran managed to rock around the electronics. My biggest gripe, though, is over the totally superfluous song buried at the end of track 10 - after six full minutes of silence. Note to musicians: if a "bonus track" is that good, why hide it? If it's that bad, why include it?
続きを読む
4人のお客様がこれが役に立ったと考えています
違反を報告
レビュー を日本語に翻訳する
すべてのレビューを参照します
Amazonプライム会員ならお急ぎ便、日時指定便が使い放題
さらに、映画もTV番組も見放題。200万曲が聴き放題 。クラウドに好きなだけ写真も保存可能。
> プライムを無料で試す