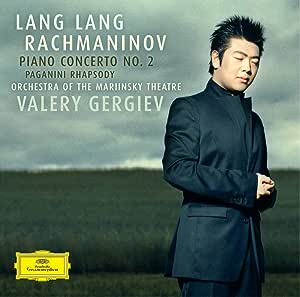 Pairing stars like Lang Lang and Valery Gergiev in two of Rachmaninov's most-popular works should yield a success, but it doesn't. In the Piano Concerto No. 2, Lang Lang's soggy rhythms and heavy phrasing are magnified by engineering that spotlights his instrument, even when the piano just doodles when the orchestra should shine. Gergiev also indulges in exaggerated phrasing and inadvisable pauses and hesitations that staunch the music's flow. His orchestra plays more like a provincial band than a world-class ensemble. Try the opening section of the Adagio movement, which should be magical but disintegrates from aimless piano playing, an inept clarinet solo, and total absence of inner tension. The Paganini Rhapsody also disappoints, Despite individual variations that come off well, Lang Lang's mannerisms and the indifferent band fail to hold the work together. More satisfying are CDs of these pieces by Stephen Hough on Hyperion, Zoltan Kocsis on Philips, and past worthies like Richter, Ashkenazy, and Rubinstein, among others. But the performers' many admirers may be willing to overlook their shortcomings. --Dan Davis