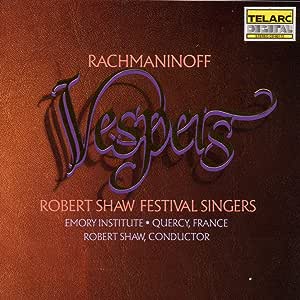 If those Gregorian chant discs seem a little, well, limited lately, perhaps it's time to move on to something equally spiritual but a bit more harmonically interesting. This disc, well-performed by the Robert Shaw Festival Singers, and conducted by the legendary choral leader, features a ravishing score by Rachmaninoff and is sung a capella, as is all Orthodox church music. (For a heartrendingly beautiful number, listen to the second cut, "Blagoslovi, Dushe Moya," or "Bless the Lord, O My Soul.") Along with well-tuned choral singing, there is a fine solo contribution by tenor Karl Dent. --Sarah Bryan Miller

LuelCanyon
5つ星のうち5.0 the finest
2005年12月26日にアメリカ合衆国でレビュー済み
Amazonで購入
This is a supreme recording of the All-Night Vigil, no two ways about it. Tenor Karl Dent's singing of the Nyne Otpushchayeshi (Nunc dimittus) is monumental, it takes your breath away. Among so many atributes, Shaw's pacing of this piece leaves nothing wanting; the spaces breathe and contact is multi-dimensional from the first moment until the end. I think the scope and beauty of Shaw's re-creation is unrivalled since the USSR Russian Chorus version on vinyl (never issued on CD). Every musical detail is seen to both by Shaw and his singers; rarely has any great choir sung with such freedom and musicianship, the hallmark of Shaw's legacy surely, and it is munificent and enticing here. There's nothing that's not in service to the music, and utterly unaware of itself - it's the most imposing art imaginable. This is music making of tremendous humility and perfection. a palpable transfixion of Rachmaninov's unearthly score. The basses are radiant, the soloists sing with refined discretion, and there's not a single artistic intention left unrealized. Some will wander to barely brighter sonics, and it's true, but this is an incomparable version of the All-Night Vigil. It's magnificent.
続きを読む
20人のお客様がこれが役に立ったと考えています
違反を報告
レビュー を日本語に翻訳する

Alexander Z. Damyanovich
5つ星のうち5.0 Robert Shaw does FAR better than some others would make it seem...
2001年5月3日にアメリカ合衆国でレビュー済み
Amazonで購入
Whoever said that this performance "sucks" and blatantly disregards/ignores the score is plain WRONG!

The same goes for those who think of it as "filth" in regards to its Old-Church Slavonic pronunciation - I'll in fact (having now heard samples from Chjernushjénko as well as Korñijev and Poljánskiy's complete recordings as studiously as possible) go as far as to say that Shaw's choir is even BETTER than all those three so-highly-acclaimed Russian groups in that field alone!! [Those other choirs stray more into modern Russian than they ought to be (note the tenor soloists on both Poljánskiy's and Chjernushjénko's recordings in the "Nï'ñe otpushchájeshi rabá tvojegó" {movement 5} - they slur the "shch" sound into a regular Muscovite "sh" {St. Petersburgers still have the "shch" sound {e.g., "fresh-cheese"} clearly audible!!)! While we're at it: Old-Church Slavonic, although the mother tongue for Russian (and all the other Slavic languages, while we're at it!), is still NOT the same as Russian!!] Whoever wants to argue with me is promptly referred to the score as published by Musica-Russica Corporation - check their pronunciation guide at the back of the book and you'll see what I mean.

[While we're at it: let it be made very clear that I strongly deplore singing Old-Church Slavonic texts as modern Muscovite Russian the same way as one ought to when one uses modern-Italian pronunciation with Latin texts!!! I know this will make me even more unpopular, but neither practise is one I can accept to endorse!]

Otherwise, regarding the alto solo: having that part taken over by part of the choir-section is in all likelihood what the composer would have accepted as an 'ossia', just like he does for the tenor solo parts later on (which are quite beautifully sung, even if the sound may not be 100% idiomatic, which anyway is a matter of taste - personally I DO prefer it over the Russian equivalent soloists in that part). [The only thing that bites at me is the solo-tenor's flub towards the end of his first entry in movement #9, with the text "Voskrjesjéñije zhje apóstolom rcï'tje!" - he omits the 'c' (pronounced as 'ts', like in 'bolts' or 'Tsar'} so it becomes "rï'tje!", a definite flaw!!] Secondly, the placement of the choir is indeed quite recessed, but at no point is the diction, the music or the outstanding choral sound compromised. Thirdly, the very slowness of Shaw's interpretation (compared to the samples I tried out of Cleobury, Rostropóvich, Chjernushjénko, Korñijev, and Poljánskiy - the last two of which I've now heard in full) lends an air of deep mysticism to this work - and, following with the score (as well as having at least some direct knowledge of both Russian and - as in this case - old Church Slavonic {not to mention that in my former church yours truly was able to perform movements #6 and 9}) I see nothing otherwise disregarded. Overall it's a matter of taste: yes, there are parts I'll admit could be moved somewhat faster (especially IF in a drier acoustic); however, the overall achievement is utterly undeniable. Sure, go ahead and get at least one of the others (in the above list - or the undoubtedly other fine ones that are likewise acclaimed), but Shaw's recording most certainly has every claim to be an equal to those overall and deserves to be in every CD library.

jakedaisy
5つ星のうち5.0 Choral music from the top
2015年5月31日にアメリカ合衆国でレビュー済み
Amazonで購入
If you at all love Russian Orthodox choral music, this is for you. If you've never experienced it, this is for you. This music has to be heard and to resonate within you in order to grasp its majesty and breadth. It is the ultimate "church music," and yet it just lets you lose yourself in a majestic world of gorgeousness.
続きを読む
3人のお客様がこれが役に立ったと考えています
違反を報告
レビュー を日本語に翻訳する

Chrissie Girl
5つ星のうち5.0 Great recording of a great work!
2020年8月2日にアメリカ合衆国でレビュー済み
Amazonで購入
This is my favorite recording of the Rachmaninoff Vespers. I purchased it from Amazon as a CD because my mp3 file disappeared when my data was transferred to a new device. I was glad to find a recording of the Robert Shaw performance at Amazon!
続きを読む
違反を報告
レビュー を日本語に翻訳する