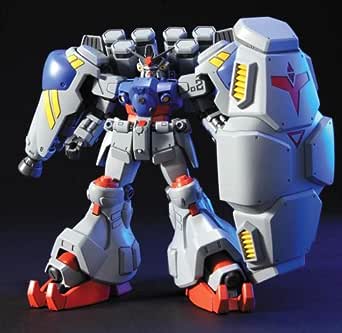 like the original High Grand 1:144 scale, this model comes with the iconic giant shield the Physalis is known for. but this model comes with a beam bazooka instead of its Atomic bazooka, the difference is mostly cosmetic and the model can still complete the look the gundam had in the show with the bazooka out.

this model also includes a series of six MLRS Pods that can attach to the backpack. for display I find having the left MLRS pod and the beam bazooka displayed has the best imposing effect. the figure has decent Articulation for its size and has fantastic accessories, 2 Beam sabers which store in its hip panels. the bazooka barrel and trigger that stores in the shield like in the show, the bazooka butt/shoulder connection component that stores on the right shoulder, and two beam saber effect parts.

unfortunately I had to glue the right and left hands together to stay together, the left hand is now forever holding its shield, but due to the fact that in the show it rarely ever drops said shield, it don't bother me.

the arm does hold the shield quite well for my model and the plastic is nicely durable, much to my surprise! unlike the HGAC Wing Gundam I got, the V Crest is made of a thicker plastic so I'm not as worried about it as I was with the Wing's which broke before. so there is very little I worry about aside the effect parts for the beam sabers.

articulation wise do not expect any extreme poses the feet are so big they don't move much and there is no upper thigh swivel. the arms only go up to 90 Degrees, and the hands only swivel. But the wrist cuffs are built to pivot only up and down. the shoulder binder thrusts can rotate, and splay out quite nicely however. the thrust cones are on balljoints and the engines can bend downward at 90 degrees. one plus, Independent Side skirt movement!

I think the one thing I Am disappointed with is the amount of stickers, or seals. 27 stickers make up the yellow, metallic red, eyes, forehead vents, waist cod piece, chest vents, shield, legs, Vulcans, and one for the shoulder designation number. II only found myself using a mere few of them, just the eyes and shield. the rest I painted myself.

this model is quite awesome on its own, the original Gundam RX-78GP02A HGUC 1/144 Scale Model kit with Atomic Bazooka is available but they are basically the same but with this one you get a different bazooka and a new set of weapons. IF you prefer Screen accuracy, get the other version. its a few dollars cheaper and looks just as good. as for me I am quite happy with this one and I do like the extra weapon MLRS pods. the plastic is quite durable and I am very happy with it. but if I do choose to get the other it will be for the extra parts just in case I would like to display it with the original Atomic Bazooka, or without the shield. but that is just me. if you prefer get the original version. but this one is still pretty cool for those who want a couple extra accessories.
続きを読む
5人のお客様がこれが役に立ったと考えています
違反を報告
レビュー を日本語に翻訳する
すべてのレビューを参照します
Amazonプライム会員ならお急ぎ便、日時指定便が使い放題
さらに、映画もTV番組も見放題。200万曲が聴き放題 。クラウドに好きなだけ写真も保存可能。
> プライムを無料で試す