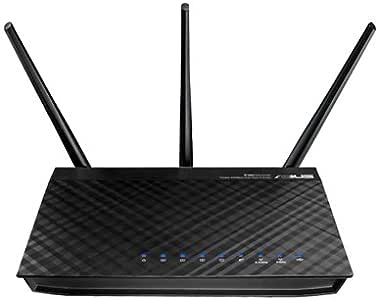 Greggg
5つ星のうち5.0 easy config and improved connectivity
2016年12月14日 - (Amazon.com)
Amazonで購入
For three years, we have used AT&T Uverse for our internet connection. Their modem/router is OK, but earlier this year, we kept noticing its wifi signal falling off. Kept losing connection on our smartphones, which was not a huge deal because they switched to cellular access. But when our laptop lost wifi, it WAS a big problem. Just could not keep wifi consistent.
SO: We bought and installed this router in August 2016, 4 months ago, and it has worked perfectly. No downtime. I've noticed that when I set up new routers every few years, the setup configuration screens are always different. This was too, but was pretty easy to configure. It does have plenty of options for the high-tech person to fine-tune his options, but for me, I'm just using the basics. (Of course, under this arrangement, I had to reconfigure the AT&T modem/router as a "modem only" so it would not interfere. Figured that out OK.)
Wi-Fi coverage with the ASUS is consistent, and STRONGER around all parts of the house, than was the AT&T modem/router. Thank you, Asus. Thank you, Leo Laporte.
続きを読む
2人のお客様がこれが役に立ったと考えています
レビュー を日本語に翻訳する

Peter Besenbruch
5つ星のうち5.0 Powerful, Slick, Fast
2017年6月21日 - (Amazon.com)
Amazonで購入
This slightly out of date router replaces an even more out of date Linksys 54GL. This particular Asus N series router is the higher end one, in that it offers a 5G channel and lots of RAM (256M). If your device supports it, you get extra speed, and less crowding. I bought this router to flash with either Tomato or DD-WRT, but I haven't done so yet. I rather like the firmware it has. Connections are fast, stable and reliable, both as a wireless router, and as a wired one. My Internet speed is nothing to write home about, but there is a fair bit of local traffic, and that's where I notice the speed increase, particularly with the wireless connection.

The firmware has quite a few bells and whistles. I am using its VPN capabilities. It was very easy to net up, and it's handy making an encrypted connection to the router from a public network. It adds a margin of safety when checking e-mail, and the like. The unit also offers USB support, making files available over the local network, and the Internet. Toss in some bandwidth shaping, parental controls, and more, and you have a powerful consumer router.

Update 13 September, 2017: I have flashed the router with the Merlin firmware. It offers basically the same interface, but with a few more bug fixes, and a few extra features. Updates appear to come monthly, so far.
続きを読む
1人のお客様がこれが役に立ったと考えています
レビュー を日本語に翻訳する