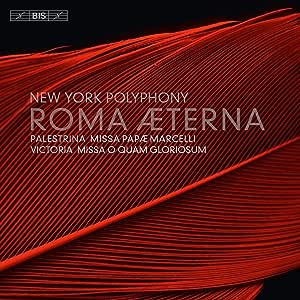 Dean Frey
5つ星のうち5.0 Powerful, pure & polished polyphony
2016年7月19日 - (Amazon.com)
New York Polyphony, whose 2014 Christmas album was a stand-out release, now present this superb recording of great music from the Eternal City's 16th Century artistic peak. Singing one voice per part (the core group in the 4-part works, augmented with other fine singers in 6-part repertoire) New York Polyphony provides absolute purity in these amazing works. There's been some criticism that there's too much precision - Brian Wilson at MusicWeb International says, in an otherwise admiring review, "everything here sounds just a little too perfectly polished" - but I don't see it that way. The intelligibility of the words of the mass in spite of polyphonic overlapping became an important issue following the Council of Trent, and under the influence of Cardinal Charles Borromeo, according to Ivan Moody's excellent essay included in the liner notes. This repertoire, and especially the Palestrina, is about the spiritual life, but the politics of the Counter-Reformation (even if one discounts the debunked legend of Palestrina as 'saviour of polyphony') looks to the presentation of Catholic music as perfect and eternal. Power, purity, polish, polyphony: these all go with another P word: power.

Finally, I must say some words about the great record company BIS. From their home in Sweden they have real global reach: their projects with OSESP in Sao Paulo and Bach Collegium Japan in Tokyo represent the highest possible musical and engineering standards. This project with New York musicians recording in Omaha, Nebraska continues that legacy of excellence.