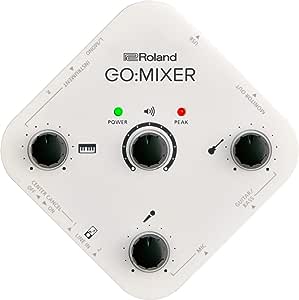 Mr. A. Milliken
5つ星のうち5.0 A must for easy live home recording.
2017年10月8日に英国でレビュー済み
Amazonで購入
I've been looking for a way to easily record audio to my smartphone to share for quite some time and I must say that this little box delivers in spades.

It designed for the YouTube bedroom writer generation. It's a simple yet effective design, small enough to be portable, yet offers enough input options for potentially a whole band to play and record a jam/song simultaneously.

Its incredibly empowering just being able to plug the box into my phone via USB, plug my guitar/piano/drums in and record a new song idea almost immediately from conception. Then share that idea with friends/family for near instant feedback via the Internet.

The quality is near perfect, assuming you don't clip/peak the audio. There is a dial for each main instrument input as well as a master volume dial to adjust as appropriate. The box also has a peaking LED which is useful to have but, its not always easy to ensure you have everything dialed to the right level. I much prefer to use the monitor output with headphones to judge this rather than using a small LED on a small box. I expect this to be more of an issue for a full band, than a someone tinkering away on their own or recording one layer of audio, even then, it's not a deal breaker by any means.

It can be used for both recording audio, using a sound recording app or while recording video, which is arguably it's biggest selling point to many. The latter is where I ran into a minor hiccup though, and I mean minor. I initially tried to record video through my built in camera app, this didn't work, however, it was fixed simply by downloading the Go:Mixer app (1MB) to ensure compatibility. It's likely that many of you won't need to do this if you have phones produced by listed, supported brands, but it's worth noting. It's also worth noting that my phone runs Android and has a USB C connection and it still works absolutely fine with a USB B to USB C adaptor plugged in for those worried about this.

Also worth noting that I was able to play audio on my phone while video recording a drum track without using my headphone jack to run it though my Roland Drumkit. Plug it in, monitor through the box, hit record and play the song, minimal fuss without any additional cables etc. This also technically means you could theoretically record a track layer by layer by using this illicit feature. Which I have tried by using two sound recording apps, it's not perfect and the recorded layers do fade into the background and bits inevitable get clipped at the beginning, but as I say, it's possible, but not a cited feature.

It does have to be said that most phone have their USB/Lightning port at the bottom of the phone. This means that if you wish to record video that you may want to consider buying a phone clamp/tripod to it's not resting on the cables as you record in portrait mode --the dedicated app flips the video to landscape mode without editing when phone is on it's side. It still works resting on the cables but is far from ideal for many reasons I don't need to explain.

Overall, if you were like me using your phones dedicated mic to record and share then this is a must buy. The clarity it delivers makes a huge difference. The price may seem a touch steep but the options it unlocks are definitely worth the price, at least to me. Buy it.
続きを読む
11人のお客様がこれが役に立ったと考えています
役に立った
フィードバックを送信中...
フィードバックをお寄せいただきありがとうございます。
申し訳ありませんが、お客様の投票の記録に失敗しました。もう一度試してください。
違反を報告
レビュー を日本語に翻訳する

jammy
5つ星のうち2.0 Crackling sounds made this unusable...
2017年11月2日に英国でレビュー済み
Amazonで購入
Maybe mine was faulty but as much as I wanted to like this product it just wasn't up to the job. As a pianist, I wanted to record from my digital (Roland) piano that has 2 outputs (L&R) whilst using the Monitor Out with my headset and having the iPhone record the session.

Unfortunately, the headset experienced the most annoying of crackling (especially when playing chords in forte) - this was even with the volume of the piano set at 50% - as such I had to return it. Will look elsewhere for an audio interface now...
続きを読む
5人のお客様がこれが役に立ったと考えています
役に立った
フィードバックを送信中...
フィードバックをお寄せいただきありがとうございます。
申し訳ありませんが、お客様の投票の記録に失敗しました。もう一度試してください。
違反を報告
レビュー を日本語に翻訳する

Richard B.
5つ星のうち4.0 Warning:Does not work with Android USB-C phones...[UPDATED]
2019年4月21日に英国でレビュー済み
Amazonで購入
This unit has a 'special' only-use-with-this-mixer cable. It's micro-USB-to-microUSB. If you're own mobile phone has a USB-C charging socket, obviously this cable will not fit - what's abd however is even if you have (or purchase) a micro-USB-to-USB-C that does physical fit - the GO:MIXER will not work anyway. The GO:MIXER will not power up, and no recording is possible. Bad news.