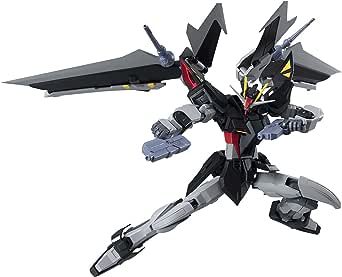 Mr Edmund C. Chalmers
5つ星のうち2.0 Great design crap build quality
2018年11月18日に英国でレビュー済み
Amazonで購入
Build quality is unacceptably poor. The right arm will literally into three pieces as you try to move it, hell it will fall apart as you look at it. This is my favourite mobile suit design and this figure has actually really put me off. I literally cannot touch it without it falling apart. 2 stars is generous as the arm thing ruins the whole experience
続きを読む
役に立った
フィードバックを送信中...
フィードバックをお寄せいただきありがとうございます。
申し訳ありませんが、お客様の投票の記録に失敗しました。もう一度試してください。
違反を報告
レビュー を日本語に翻訳する

Vulca
5つ星のうち5.0 Strike Noir: Weapons Master
2016年12月31日にアメリカ合衆国でレビュー済み
Amazonで購入
The initial five Gundams (called G-Weapons of the GAT-X series in universe) for Gundam SEED have always been favorites. Of the five the GAT-X207 Bitz was my absolute favorite. However the GAT-X Strike was no slouch either. Its core feature was its striker packs to adapt to different situations. It started with three, but gained more over the years along with an improved verson of the Strike (GAT-X Strike E). The pinnacle it seemed for the striker packs was the Integrated Weapons Striker Pack (IWSP). That Striker pack always looked way too bulky for the Strike. So when the Noir Striker came along and did something similar with a slimmer look and cooler color scheme, I was over joyed. The GAT-X105E+AQ/ME-X09S Strike Noir is the best version of the Strike in my opinion, and I am glad to have figure representing it.

The Strike Noir appeared in the three part OVA Series Mobile Suit Gundam SEED C.E. 73: STARGAZER. The base figure without the striker pack is fantastic. Like any other Side MS in the Robot Damashii line, the articulation is superb. I wish the skirt armor would allow for the legs to move farther backward. The feet could use a few more degrees of motion too. Otherwise it poses most any way I want it to. It includes all the accessories that are featured in the fiction. It comes with four sets of hands: fists, holding things, trigger fingers, and splayed. I usually don't use the splayed hands much on the figures, but on the one, they have been retooled to fit the EQS1358T Rocket Anchors. These are awesome. They are made out of wire allowing you to shape it how you want. I certainly use the splayed hands more on this figure. The rocket anchors also fit in the toes or heels. The "Armor Schneider" Combat Knifes from the original have been replaced by two M8F-SB1 "Shorty" Beam Rifles (they're pistols really). These fit in the the trigger fingers perfectly. The only flaw I can point out is that it is not colored properly. However the Strike E changes color when equipped with the Noir Striker pack. So until we get some reliable color changing plastic that activates when the striker pack is equipped, I'd rather have that color scheme than the Strike E's.

Speaking of the Noir Pack, mounting it is a breeze on this figure. It greatly adds to its silhouette... of course it also adds to its arsenal. The wings house two pairs of weapons. The first are the MAU-M3E42 Twin Linear Guns. These are mounted on the inside of the wings and use 3 hinges for a multitude of position. The second are a pair of MR-Q10 "Fragarach 3" Beam Blades. These are cool, BUT they are very loose in the holding things hands. They will fall out pretty easily. The wings on the Noir pack feel weird when it comes to its articulation, but they still achieve any pose I could want. Finally it comes with two optional 57mm High-energy Beam Rifles which are just badass. Lore wise, these are the same as the GAT-X103 Duel's beam rifle, but mold wise, I cannot say.

There does seem to be some quality control issues. The plastic feels slightly cheaper than releases just a year before. Also the right hip armor skirt piece was very loose on mine.

Overall, this is a badass Gundam with a superb amount of playablility thanks to its wide arsenal of weapons, It also still achieves this arsenal without looking bulky. Highly recommended Gundam and Mecha fans.
続きを読む
2人のお客様がこれが役に立ったと考えています
役に立った
フィードバックを送信中...
フィードバックをお寄せいただきありがとうございます。
申し訳ありませんが、お客様の投票の記録に失敗しました。もう一度試してください。
違反を報告
レビュー を日本語に翻訳する

sadly it is a little top heavy and small feet means its hard to stand. the front shoulder skirts come out easy on my version. sometimes the sword comes out

so its not prefect, but the accessories and look/feel is awesome. still recommend for SEED fans- this is THE Strike variant to own!
続きを読む
役に立った
フィードバックを送信中...
フィードバックをお寄せいただきありがとうございます。
申し訳ありませんが、お客様の投票の記録に失敗しました。もう一度試してください。
違反を報告
レビュー を日本語に翻訳する

Manty
5つ星のうち5.0 Christmas Present Done Right
2016年12月26日にアメリカ合衆国でレビュー済み
Amazonで購入
This is my first Robot Spirits line figure and I am so glad I got it. The package arrived on time and brand new but I didn't get to experience the full joy of it until Christmas. Anyways, the figure itself is a work of art. You can tell it was carefully sculpted and what not. The articulation is amazing and it feels very sturdy in loving hands. I think I see why this line replaced the MSIA line of old. Anyways, they are surprisingly bigger than they look inside the box. I was expecting this guy to be about 4 to 4.5 inches tall but he's at least 5 to nearly 6. He might feel a little fragile given the accessories but if you're careful then he probably won't break. 100% recommended for all Gundam lovers so glad I bought two of these.
続きを読む
役に立った
フィードバックを送信中...
フィードバックをお寄せいただきありがとうございます。
申し訳ありませんが、お客様の投票の記録に失敗しました。もう一度試してください。
違反を報告
レビュー を日本語に翻訳する

Christian
5つ星のうち3.0 Good product
2018年11月27日にアメリカ合衆国でレビュー済み
Amazonで購入
Box was in like a c grade shape condition. But the product was in good shape, a grade condition. Also the figure is about 5 and a half inches.
続きを読む

Reicku H.
5つ星のうち5.0 All around great.
2016年8月2日にアメリカ合衆国でレビュー済み
Amazonで購入
Was in very good condition and wasn't loose on any parts. It was a superb figure and I am pleased with the purchase. (Be warned not every figure is the same. Some may vary in conditions.)
続きを読む