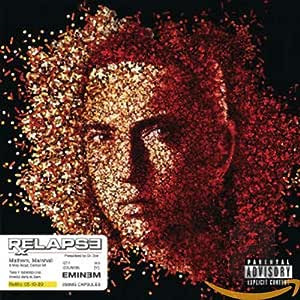 2009 album from one of the most successful Rap artists in history. He's sold more albums than most Rock and Pop superstars. He's a Grammy winner. He's an Oscar winner. He's been on the cover of practically every music magazine since his debut album dropped in 1999. Now, 10 years after The Slim Shady LP, Eminem marks his 10th anniversary as a Hip Hop hurricane with Relapse, yet another skillful collaboration with Dr. Dre. Features the single 'Crack A Bottle' (which features Dre and 50 Cent).

Cubby Kovu
5つ星のうち3.0 not Bad but not Great either
2015年1月28日に英国でレビュー済み
Amazonで購入
There are some really good songs on this album but there is something missing from it I dunno what it is There is something that just doesn't feel as good as the eminem show album or even Encore. Maybe there is a lack of humour or something I not sure what it is But at least he has since made some much better albums. It is not a bad album there are som really good songs on it but unlike his other albums I have found it less engaging the lyrics have been less interesting and intelligent I think also his tone is the same all the way through it too which is not normal for Em
続きを読む
役に立った
フィードバックを送信中...
フィードバックをお寄せいただきありがとうございます。
申し訳ありませんが、お客様の投票の記録に失敗しました。もう一度試してください。
違反を報告
レビュー を日本語に翻訳する

Sam Jukes
5つ星のうち5.0 Good CD for any rap fans.
2019年7月10日に英国でレビュー済み
Amazonで購入
I really enjoy this album! From its quirky tracks to some of the more mainstream hits. It feels a little like eminem when he first came to the surface however not as raw or shocking. Definitely worth a buy for rap and eminem fans. The quality of the CD was also very good.
続きを読む
役に立った
フィードバックを送信中...
フィードバックをお寄せいただきありがとうございます。
申し訳ありませんが、お客様の投票の記録に失敗しました。もう一度試してください。
違反を報告
レビュー を日本語に翻訳する

Ben
5つ星のうち5.0 A Must Have!
2014年7月7日に英国でレビュー済み
Amazonで購入
Okay, this will take a while to both write and read but I am going to explain what each track is like and my opinion (also a rating out of 5 for each track). Usually I wouldn't bother with reviews but I want to help people with deciding whether to buy it or not.
I'll start off by saying that there is not a track that I dislike on this CD, they are all great and lyrically genius, my top tracks would have to be (In order of the order on the CD) Bagpipes from Baghdad, Hello, Same Song & Dance, We Made You, Stay Wide Awake, Old Time's Sake, Déjà Vu and Beautiful. I'm a little disappointed that My Darling and Careful What You Wish For didn't make it onto the regular RELAPSE CD, but nonetheless still a great album!

First Em starts of with Dr. West (skit), a drug related skit (No surprise after his drug problem). In this skit Em meets with his rehab doctor (Dr. West) right before he's discharged (from Rehab). But things take a turn as Marshall realizes that there are still some hidden demons within him from the past (SPOILER ALERT) and then wakes up, realizing it was just a dream. I think this a great way to start off his album, showing you that he is still old Slim Shady full of hidden demons which jump upon you during each and every song, from 3 a.m. when Slim appears as murderous as ever to Underground where Marshall raps about how "rehab is for quitters". 4/5

Second is his first song and second official single on RELAPSE. In this song Eminem becomes his alter ego Slim Shady and raps from his point of view as he becomes a serial killer... and he killed this s**t (no pun intended). Perfect way to return to the rap game as Slim and show his not a changed man "Still Shady Inside" (Quote from Evil Twin). 4/5

No 3 on RELAPSE is My Mom, a long awaited record that Em promised to do "Make a Record about doing drugs and name is after her" (Quote from My Name Is). It claims how his drug habit stemmed from the fact that his mom forcefed him pills as a child. I personally think this is a better track than most people say it is, I think it's his worst track on this CD but i still really like it. He is a lyrical genius and I feel people don't respect this song enough. 2/5

4 is Insane, in this track Em alleges that his stepfather molested him (although he later claimed that this never really happened just that he made this song to gross people out, hate to tell you em but you've done better at grossing people out in earlier records). At first I disliked this song because of the theme, but then I listened closer to the lyrics and then appreciated the absolute lyrical skill used in this track. 4.5/5

5 is Bagpipes from Baghdad, This is a slight dis on Nick Cannon, but is aimed more so at his lasting lust for Mariah Carey. This song does (of course) have a 'familiar' theme of murder and drugs (a regular theme throughout Eminem's works, especially RELAPSE). This song is sang in a Middle-Eastern accent during the hook and at times in the chorus. I really like this track (especially the first verse) it is very clever, and he refers to 'true' scenarios throughout the song of things that have happened between Mariah and himself, also refers to a few horror movies too (another revisited theme throughout RELAPSE). 5/5

6 is Hello, This is him basically reintroducing himself to us and the rap game and he also talks about drugs, alcohol, b*****s, sex... Y'know, the usual. I love this song, very clever like every song on RELAPSE. You can't buy RELAPSE and not listen to Hello. 5/5

Then is no 7 Tonya (skit), the crazy Slim Shady attacks another victim again, this skit fits in with the next track... (3/5)

Which is track 8: Same Song & Dance, in this song em–wait I mean slim shady raps about raping three women: Tonya (Who we are introduced to in the last track), Lindsay Lohan (He raps about her in the second verse) and finally Britney Spears (In the last and final verse). This song has a great beat and very clever (You're going to hear 'very clever' a lot), yet explicit lyrics. (What do you expect from an Eminem song, and a song about raping as well) 5/5

Next is Song 9: We Made You, this song is quite a pop friendly song (As is at least one song on each of his albums) in the styling of The Real Slim Shady from The Marshall Mathers LP. Both amazing songs, I love original hip-hop, you cant beat it... But I gotta admit, Em does a f*****g good job at it (swearing to emphasize). 5/5

After is Medicine Ball which is track 10/20 on RELAPSE. I could sum this up in one sentence: Eminem (as Slim Shady) raps about gay serial killers, his addiction to sleeping pills, sitting on Madonna, and pushing Christopher Reeves into Quicksand. So yeah great song. We have a lyrical genius in our midst! I don't know anyone who could fit all this into a song and make it good! 4/5

11 is Paul (skit). Basically if you didn't know this already, Em features two reoccurring skits in every album (except sslp and before): Paul Rosenburg and Steve Berman. Paul is a Music Manager from Detroit, Michigan, US. He is most well known for his association with hip hop artists Eminem (of course), The Knux, DJ AM, pop punk band Blink-182 and Action Bronson. 3/5

No 12 is Stay Wide Awake, Eminem describes a series of rape fantasies, the dark side, and mutilation of women. It's a great track, probably my favorite (from RELAPSE), the last verse is very smart as it actually goes backwards if you look closely at the lyrics. A must-listen-to! 5/5

Track 13: Old Times's Sake feat. Dr. Dre. Eminem (as Slim) and Dr. Dre rap about their favorite pastime: smoking chronic. Oh and there are also planes and b*****s involved. I love the way Slim starts (the Intro) as a captain, or "f*****g captain" as he says. He is mocking/parodying the typical announcements that pilots give before takeoff; the plane is an allegory for smoking weed, as they both get "high". 5/5

14: Must be the Ganja. In a tradition stemming back to his earliest albums, Eminem is always sure to include a "drug song" for your party mixes. Even though he was sober for the recording of this, he has plenty of experiences to draw back on in order to make this song. 4/5

15 is Mr. Mathers (skit). I think this is an absolutely PERFECT way to introduce Déjà Vu! It is unbelievable clever and leads in well with the theme and... and... just EVERYTHING! Oh and for any Six Feet Under fans out there: you might recognise the voice of the "Male Medic" as Matthew St. Patrick, who played the (major) role of Keith. 5/5

Now is track 16 a.k.a. Déjà Vu. This is an all time favorite of mine, This was the first song that I liked on RELAPSE, and that was When I first got into Eminem, so it's a song that reminds me of 2009 whenever I hear it. It basically documents his overdose and what lead up to it. It is basically a trip into the mind of an addict. 5/5

Then is 17. Beautiful. Considered by both fans and critics as the strongest off RELAPSE, "Beautiful" is the only song Eminem actually recorded during the hiatus between albums ENCORE and RELAPSE when he was not clean. His emotions here are clear: The addiction to drugs are sinking him into depression, and he feels trapped, as if there is not escape. Rehab isn't proving particularly helpful at pulling him out of this mood, either. By the end of the track, however, Eminem expresses more optimism and hope for the future. 5/5

Track 18 is Crack a Bottle feat. legends Dr. Dre & 50 Cent! This song went on to win the Grammy Award for Best Performance by a Duo or Group in 2010. Before it's official release on iTunes (used to drum up hype for RELAPSE), a reference track leaked. It featured Eminem performing Dre's verse first, then his, both of them being very similar to the final cut. He then performs a 3rd verse, rumoured to be ghostwritten for 50 Cent, who appears on the final track albeit with a completely different verse. 4.5/5

No 19 is Steve Berman (skit). Basically if you didn't know this already, Em features two reoccurring skits in every album (except sslp and before): Paul Rosenburg and Steve Berman. Em is visiting Steve Berman, the Interscope Records CEO he shot in the skit on The Eminem Show. 3/5

CPB26
5つ星のうち5.0 I love Relapse
2016年7月25日に英国でレビュー済み
Amazonで購入
Apart from me absolutely loving relapse, the vinyl itself arrived very fast (bearing in mind I ordered without Prime). It came within 2 days of me ordering. The LPs are in mint condition along with the vinyl cover, and all are smooth playing. The only bad thing is that on "We Made You" towards the end the song starts to keep replaying the same part about 7 times and then continues. Other than that it's virtually flawless.
続きを読む
1人のお客様がこれが役に立ったと考えています
役に立った
フィードバックを送信中...
フィードバックをお寄せいただきありがとうございます。
申し訳ありませんが、お客様の投票の記録に失敗しました。もう一度試してください。
違反を報告
レビュー を日本語に翻訳する