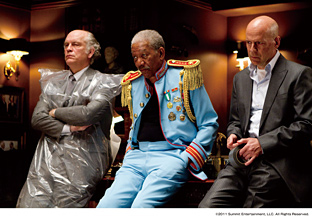 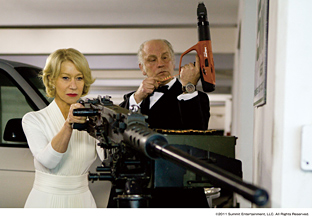 Mixing action and light-hearted comedy often produces tepid results. The gags being more broken than Malkovich's mind. Fortunately this adaptation knows exactly what it is and never tries to be anything else. It's straight up fun, entertaining and swift. Agents literally explode into smithereens. I mean, literally. Boom! An exquisitely dressed Mirren unleashes a barrage of bullets from a gun that is three times the size of her. Willis actually smiles. And I'm absolutely fine with Parker getting kidnapped and handcuffed to a bed against her will. Perhaps the only time I'll allow that, ever.

Sure, the plot descends into a blah-fest that no one cares about, mostly due to the environment changing every eight seconds (to which a postcard is shoved in my face). And the climax is so anti-climactic that Willis essentially sneezes on the villain and the world is saved. Yet the cast packed tonnes of charisma into their performances, that they outdo the script given to them. The older cast members delivered the goods, but so did Urban who channelled his inner badass in preparation for 'Dredd'. Despite the generic forgettable plot of RED that not even the fantastic cast cared about and Willis munching on Parker's face at the end (ew...), it's the buoyant action and humour that elevated this adaptation into be classified as "good".
続きを読む
2人のお客様がこれが役に立ったと考えています
違反を報告
レビュー を日本語に翻訳する

Albatross
5つ星のうち4.0 Die Hard with a walking stick
2017年10月4日に英国でレビュー済み
Amazonで購入
I don’t know why I feel so ‘dirty’ watching ‘Red.’ Deep down I know it’s hardly Shakespeare and I should never rate it more than a 2/5. However, there’s something oddly satisfying from watching a load of old actors go crazy with guns and take out wave after wave of trained henchmen like they were immortal. ‘Red’ is effectively an action-thriller, with a healthy dose of ‘Bourne-like’ spy-movie thrown in there. Bruce Willis plays a retired John McClane (not really, but he might as well – effectively a retired CIA killer) who, something, something, something, ends up on the run with a woman he’s been flirting with over the phone. Naturally, there’s hired government killers on his trail at every turn and he must fight for survival every step of the way while he desperately tries to prove his innocence. Think that plot synopsis sounds familiar? Well, it does. It’s basically the same as every other recent (Bourne clone) spy movie made in the last few years. It’s nothing new, but it is fun.

I guess you could say that it’s a bit of a gimmick having the lead being an ‘elderly’ balding (sorry Bruce!) hero, as opposed to a young man with a nice tan and full head of hair on the run. In fact… it is the ‘age factor’ that is this film’s only real selling point. Bruce doesn’t go it alone, he’s helped out by an aging John Malkovich, an aging Morgan Freeman and an aging Helen Mirran – all of which are quite capable to murdering any young, highly-trained upstart who gets in their way. And, yes, it is fun to see them in action.

Despite the serious subject matter of death at every turn, the film never even attempts to take itself seriously. It knows it’s daft and over the top and that’s its main saving grace. If it tried to make us think that a bunch of senior citizens could really do all this then it would be ridiculous. However, throughout all the car chases and shootouts it almost parodies itself.

If you like your action movies fun (like pre Daniel Craig Bond) then you should appreciate this, plus if you’re a fan of Bruce Willis doing what he does best, or just want to see Helen Mirren wield a sniper’s rifle, then you should definitely enjoy this. The plot is simple, Karl Urban is kind of wasted as the film’s primary antagonist, hell bent on Willis’ capture/death, but he’s a nice addition anyway. Just don’t think too deeply about why an older man still has to have a considerably younger love interest at his side!
続きを読む
3人のお客様がこれが役に立ったと考えています
違反を報告
レビュー を日本語に翻訳する

Joadka
5つ星のうち5.0 Clever storyline.
2019年9月20日に英国でレビュー済み
Amazonで購入
I’ve seen it before, of course. I also have a copy of Red 2. Then I realised I really wanted to own the pair. I love Bruce Willis, and the increasingly mad John Malkovich, and Helen Mirren, too. It’s not only a very good action thriller, but it has believable characters and a clever storyline. I thoroughly enjoyed it.
続きを読む
2人のお客様がこれが役に立ったと考えています
違反を報告
レビュー を日本語に翻訳する

Bob Bull
5つ星のうち5.0 Good buy/
2021年10月4日に英国でレビュー済み
Amazonで購入
A film I have seen several times, and decided to add a copy to my DVD library. It is an enjoyable, comedy/thriller, well made with good characterisation, and does not get 'stuck' at any time, it keeps moving along.
Clearly it comes down to individual tastes so don't buy on my recommendation alone.

Sezbet
5つ星のうち4.0 A pretty good DVD
2015年5月16日に英国でレビュー済み
Amazonで購入
Well, the film's been reviewed to death here, so I'm not going to review that, I'm going to review the DVD, after two trailers you can skip through, you get to the menu. It has a very interesting commentary by an ex CIA agent which is definitely worth the watch, and frankly if that was the only extra on this disk I'd be happy, however there are quite a few other bits and pieces. There is a trivia track that you can choose to run throughout the film - I gave up on it after the third piece of trivia because it had nothing to do with the film, and I don't care how many times you hear 'I Got You Babe' in Groundhog Day, or how many official shades of red there are; I love watching extended and deleted scenes, and there are plenty of them here, choose 'play all' though, just for the speed of getting through the menu screen - the same with the interviews, which are shortish but interesting, and the CIA 'documentary' which shouldn't have been separated into small little sections, there was nothing new to me in the documentary, but then I've watched a lot of documentaries, it might be new information to you. Compared to some DVDs these days this is a pretty decent one for extras, according to the back of the box there's an easter egg too, which I haven't found yet, so if someone could enlighten me....?
続きを読む
1人のお客様がこれが役に立ったと考えています
違反を報告
レビュー を日本語に翻訳する
すべてのレビューを参照します
トップへ戻る
Amazonについて
Amazonでビジネス
Amazonでのお支払い
ヘルプ＆ガイド
日本語ショッピングのための言語を選択します。 日本ショッピングのための国/地域を選択します。
© 1996-2020, Amazon.com, Inc. or its affiliates