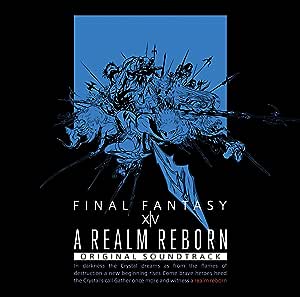 Daniel
5つ星のうち5.0 Best MMO Soundtrack, period.
2016年4月25日にアメリカ合衆国でレビュー済み
Amazonで購入
If you know only one thing about Final Fantasy, it should be that it is a series with absolutely incredible music. FFXIV is no different. This soundtrack is fantastic. These are all songs from the base Final Fantasy XIV: A Realm Reborn game. That means patch 2.0 (A Realm Reborn, the re-launch of FFXIV) up to the end of the main story. It does NOT include songs from patches 2.1 through 2.55 (such as the extra primal fights), as those are on the "Before the Fall" album. It also, of course, doesn't contain any songs from Heavensward (3.0 onwards), those are on the Heavensward album.

Anyway, this music is fantastic. Absolutely worth the purchase price.

My only complaint is that the blu-ray music disc format is not ideal. You can download the mp3 versions of all the songs contained within this disc by inserting the disc into your Playstation console and doing something over your network, but that didn't work for me due to being on a school's network, unfortunately. Shouldn't be a problem if you have a blu-ray player in your computer though.

I guess, really, my biggest complaint is that I had to buy a physical disc when really all I wanted was the mp3 files, but that's not a huge deal.

Angie
5つ星のうち5.0 Great music, great slideshows, and easy to copy the mp3s from PS4 to PC
2016年4月8日にアメリカ合衆国でレビュー済み
Amazonで購入
This review is about the actual product and has no bearing on whether or not there's a minion code included (pretty sure they all expired last year anyway for this particular soundtrack). This blu-ray exceeded my expectations. I'm going to discuss the various FFXIV soundtracks under one review, because they're all more or less similar. They are Japanese imports, so be prepared for the literature with it to have a few meaningful snippets and a bunch of stuff you won't be able to read if you don't know Japanese. It does have the lyrics for the primal music in English, which I appreciated! The songs play with slideshows of the zone or battle where you'd hear it in game, which is something I love about it (the older soundtracks are more concept art than anything, but the more recent ones are screenshots of the actual battle). You can't select songs individually to play, but they do have the option to play all of the music, or to play music by area (The Black Shroud, Thanalan, etc., and the Heavensward disc even has an option to play daytime and nighttime music). Bear in mind that this is a blu-ray, and it is a video disc, so if you're planning on copying the mp3 files, you need to have your blu-ray player on a network connection if you don't have a blu-ray drive on your computer. There are no clear instructions on how to do this in English on most of the discs, so make your way to the special features "Extras" section, and there's a spot in there to copy mp3 files. It will give you an IP address and port that you put in your computer's browser, and it will let you download zipped folders of the music files. I used my PS4 to play the disc and was able to download the music onto my laptop, and upload from there to my NAS and Amazon Prime Music so I can access the music from anywhere I have an internet connection. The data on the mp3 files shows the track title in both English and Japanese, and the order varies from soundtrack to soundtrack, so some are easier to find what you're looking for than others (I suppose you could manually remove the Japanese from the file properties, but I haven't felt the need, as I usually have my gigantic Final Fantasy playlist on shuffle anyway). There are some bonus tracks on some (but not all) of the soundtracks, and to get the password to unlock the zip files, do an internet search, because they're all on Reddit somewhere.
続きを読む
役に立った
フィードバックを送信中...
フィードバックをお寄せいただきありがとうございます。
申し訳ありませんが、お客様の投票の記録に失敗しました。もう一度試してください。
違反を報告
レビュー を日本語に翻訳する

Imario Nunez
5つ星のうち5.0 Great buy, a must have if you love the game.
2015年2月21日にアメリカ合衆国でレビュー済み
Amazonで購入
I thought it was just going to be a soundtrack, but it's so much more than that. It's got amazing menus and videos with the music and beautiful artwork.. With everything that's on the disc I feel like I paid too little!
続きを読む
役に立った
フィードバックを送信中...
フィードバックをお寄せいただきありがとうございます。
申し訳ありませんが、お客様の投票の記録に失敗しました。もう一度試してください。
違反を報告
レビュー を日本語に翻訳する