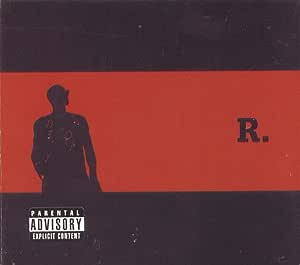 A double disc may seem indulgent after barely a decade in the biz, but after meandering through the commercial minefields of innocent fun (1992's Born into the '90s), pure raunch (1993's 12 Play), and pop crossover (1995's R. Kelly), Kelly has come close to the perfect mix--and if it takes two discs to do so, why not? There are still moments of indulgence (the forced theatrics of "The Opera"), and the occasional venture into mediocrity ("Did You Ever Think?"), but the sheer funk of tracks like "Home Alone" (a head-bobber featuring Keith Murray) and "Dollar Bill" (featuring--surprise!--Foxy Brown) allows you to overlook such cracks in the formula. Other bit players in this star vehicle include Cam'Ron, Noreaga, Jay-Z, Nas, and (yes) Celine Dion. --Rebecca Wallwork

Andre S. Grindle
5つ星のうち4.0 One Man,One Sound
2011年5月25日にアメリカ合衆国でレビュー済み
Amazonで購入
During a period when the success of R&B was largely dependent on how much alike (and how much of a party atmosphere) it had as opposed to any kind of creative activity R.Kelly seemed to flourish as a standout artist. That's because he both resisted the "new order" of soul/R&B/funk as well as embraced it. One thing about this album is that it closed his first decade of recording by embracing the recently revived concept of the double album in the genre. Not only that but is also showed how the modern spirit seemed to resist the impulse of the double album itself,which was usually to present a lot of quality music with extended runs and little to no weak songs. This might count as a slight revival of the format (MJ's  History Past, Present and Future Book I  after all only contained one album of new material) so it was interesting how it embraced the pros and cons of it's era so heavily.

Across 29 tracks and over two hours this is probably one of the longest double sets-made for the CD era it's main flaw again,typical of the era to fill nearly every available moment of space on the CD with music. Also as with all of R.Kelly's 90's albums it's very uneven. Honestly...this would've made an excellent hour long single CD and been his best release of the decade. But the fact it was so uneven was part of it's charm. What the fairly generic 2-step style hip-hop/R&B (fairly new at the time) lacked in musical innovation they gained on in lyrical content. Songs such as "When A Womans Fed Up" and "Down Low Double Life" basically help the listener to understand the place modern women have in their failed relationships with "doggish men" as R calls them-as well as their partial responsibility.

Musically by far two of the strongest songs here are the first two. "Home Alone" with Keith Murray,"Spendin' Money" and two tunes featuring Jay Z "We Ride","Only Loot Can Make Me Happy" and (to an extent) the Nas duet of "Money Makes The Wold Go 'Round" all have a stripped down "neo-funk" kind of 90's equivalent of the naked funk sound built on some thick,phat electric bass and excellent songwriting. There's also two rather unique songs in the context of this particular album in the mid tempo,wah wah drenched "Suicide",a scarily cinematic slice of slow funk concerning someone thinking the ending of a relationship as the end of his life. "Dancing With A Rich Man" brings in light latin dance ballad rhythm,keeping the "Spanish tinge" introduced from jazz to R&B and onward alive in his music.

Of course there's also "If I Could Turn Back The Hands Of Time",a completely Sam Cooke inspired vocal on a 60's styled soul ballad and the more Motown flavored ballad "What I Feel/Issues" in direct counterpoint to the more obviously adult contemporary "I'm Your Angel" with Celine Dion and the addition of the epic gospel soul standard Kelly wrote "I Believe I Can Fly". As noted if the album had been whittled down to the ten songs mentioned in this review it would've been pretty near his best release thus far. But in addition to allowing his musical uneveness to showcase the dual nature all classic soul artists tend to have it also shows how he tends to approach his albums in a similar manner to persian rugs; he tends to leave one or more musical knot undone and flawed so the album has no chance of being perfect. It keeps his music human for sure. And sometimes it keeps things from being as good as they could be. No matter how one approaches this it's still one of his finest releases.
続きを読む
1人のお客様がこれが役に立ったと考えています
違反を報告
レビュー を日本語に翻訳する

Ms Zee
5つ星のうち5.0 R Kelly is one of the coldest of his time
2020年9月18日にアメリカ合衆国でレビュー済み
Amazonで購入
I bought this CD back in the day, and it somehow grew legs and ran away. This one is a replacement.....need I say anymore?

This is one of my favorites by R Kelly.
続きを読む
違反を報告
レビュー を日本語に翻訳する