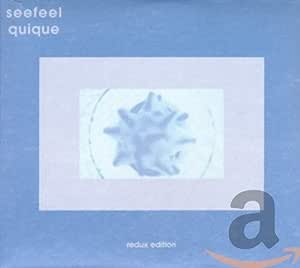 Digitally remastered and expanded two CD edition of the British band's groundbreaking 1993 debut album includes a bonus CD with rare remixes and unreleased tracks. Seefeel were never a band that would get played on Top 40 radio but the critics fell in love with their moody, brooding aural scuptre. Too Pure.

Jason Parkes
5つ星のうち5.0 Deluxe reissue of lost 1990s classic...
2007年7月1日に英国でレビュー済み
Amazonで購入
This two disc, expanded reissue of Quique by Seefeel is a reminder of a lost age, nostalgia TV and simplistic music journalism has written stuff like this out of history. I guess people like to make the easy jump from Madchester to Grunge to Britpop and forget anything that falls between the cracks? Seefeel were mildly acclaimed, which the 1993 piece by Simon Reynolds suggests, though in the scheme of things, how many have heard of them?

The late 80s probably saw some acts moving in this direction, from certain Cocteau Twins records (Seefeel would support Guthrie & co and one member would work with him on the Violet Indiana project) to the dream pop of AR Kane, Hugo Largo and My Bloody Valentine. If Kevin Shields' had followed through with something after Loveless, this might have been the next phase? Since a lot of Loveless was created on keyboards and Seefeel's sound is primarily electronic, I think this is fair to say! Seefeel still sound like the future, managing to fuse two disparate areas, their sound over all feeling like a combination of electronica and shoegazing. Blissed out in the extreme...so if you can imagine a record that sounds like a mesh of Autechre, AR Kane, Bark Psychosis, Black Dog Productions, MBV, and Ultramarine, this might be it!!

Quique is not really song based, lead by trancey electronic rhythms, it might seem too ambient and repetative for some...I say, let it wash over and through your cortex. It's probably coming from a post-Ecstasy place, the comedown after something like Voodoo Ray? This album, like Every Man and Woman is a Star and Selected Ambient Works I by The Aphex Twin makes something like Screamadelica seem a bit of a joke, after-E, after-Generations of Love, though not far from later records by Orbital, Spooky, and Underworld - I guess One Dove were a more song based relative? Seefeel weren't alone, Tortoise have recorded some material in this direction (possibly fed by their link with Autechre), while Slowdive followed this direction after masterpiece Souvlaki, their 5 track ep featuring 'In Mind' and the third and final LP Pygmalion was very electronic and in this continent.

Hard to pick out any particular tracks, since these aren't that conventional songs, one shifting soundtrack. Two discs in one go might be a bit too much, though the second disc features some alternative versions and remixes otherwise hard to get hold of. If you want to sample one track to get an idea of what this album sounds like, I'd go for 'Plainsong.' Seefeel were moving in these avant electronic directions in a much more profound style than someone like Radiohead, who get all the credit for being avant garde, when they're anything but! Quique feels like a prediction, or a few steps before joys like Dead Cities by M83, Endless Summer by Fennesz and parts of Music Has the Right to Children by Boards of Canada. A very welcome reissue of a lost cult classic LP, and one that will blow minds in the future...

A. Mee
5つ星のうち4.0 excellent re-issue
2007年12月12日に英国でレビュー済み
Amazonで購入
Quique is a sublime ambient record. Seefeel were an ambient group, that had shoegaze and dub leanings. This album could be seen as a continuation in the direction taken by My Bloody Valentine on Loveless and Slowdive on Pygmalion, but dispensing with conventional song structures altogether. In fact, most of the similarities between Seefeel and shoegaze groups tend to be quite superficial. Seefeel utilise hypnotic loops and programmed beats to create their dense sound, and although the presence of Sarah Peacock's cooed vocals and Mark Clifford's droning guitars at certain points hint at shoegaze, their music has more in common with the ambient techno and idm of the time. If the album had been mixed differently, and the bass and drums had been brought to the fore, the band may have avoided comparisons with shoegaze altogether. Although Quique was made fourteen years ago time has been kind to this album. It is a strong and consistent album and it is recommended to any fans of ambient music. Additionally, the bonus disc is excellent; it contains various remixes and other Seefeel tracks from the time. It provides an interesting contrast to the material on the album, and it showcases the band's dub and techno leanings.
続きを読む
役に立った
フィードバックを送信中...
フィードバックをお寄せいただきありがとうございます。
申し訳ありませんが、お客様の投票の記録に失敗しました。もう一度試してください。
違反を報告
レビュー を日本語に翻訳する

I'd gone to see Cocteau Twins with my sister, both of us big fans, and we'd seen them also in Bristol in October 1990.

We had no idea who was supporting, and mostly that's not really on your mind. (But sometimes amazing things happen, like when I saw Van Halen supporting Black Sabbath in 1978).

(Treat 1) Anyway, Seefeel came on and *made sounds* like I had never heard before - sublime. Bass, guitars and beautiful vocal without words. Rhythmic, melodic, provocative. I had to buy Quique immediately and still adore it.

(Treat 2) We were in a large but crammed concert hall, and the evening was fabulous. Between acts an album was played. I had to fight my way through the crowd to the mixing desk to find out what it was - "Virtual State" by Richard H Kirk. Having been a fan of Cabaret Voltaire for years this was a joy to discover.

(Treat 3) Cocteau Twins and their unique guitar style. I was never a slavish follower of the convention of guitar as lead instrument of a group - everyone did it. I preferred keyboards. But occasionally someone got it right. And when they did, it was amazing.

It's great to read other reviews here which bring other related bands like Aphex Twin into the same picture.

I hope these words bring back great memories to you, or help you discover new musical treats!

ThirdPrize
5つ星のうち4.0 Nice
2007年6月26日に英国でレビュー済み
Amazonで購入
I remember buying one of their EPs when it first came out (the one with the AFX remixes on) and really loving it. So when I saw they had reissued the album (with extra tracks) I thought I would treat myself. As it is, it's good but they were one of those bands whose songs hit a groove and don't really go anywhere. I love the dub shoegazing techno effect but over 2 CDs its may get a bit much. Best in short doses. Nice liner notes as well.
続きを読む
1人のお客様がこれが役に立ったと考えています
役に立った
フィードバックを送信中...
フィードバックをお寄せいただきありがとうございます。
申し訳ありませんが、お客様の投票の記録に失敗しました。もう一度試してください。
違反を報告
レビュー を日本語に翻訳する
その他の国際レビューを読み込む

LHB
5つ星のうち5.0 From Bliss to Utter Darkness
2018年7月7日にアメリカ合衆国でレビュー済み
Amazonで購入
I have three copies on vinyl and three on CD including the two disc set. So I guess you could say I'm a bit fanatical about Seefeel. Their music just gets darker and darker through Succour and Ch Vox which is so full of gloom Shostakovich must be gnashing his teeth with envy. Hunt them all down and next time you're feeling that 4AM misantthropy you will have the perfect soundtrack, proceeding from Quique with is rather blissful on to the utter gloom of Ch-Vox. Don't forget Starethrough and Fracture ( the EP versions) on the way.
続きを読む
役に立った
フィードバックを送信中...
フィードバックをお寄せいただきありがとうございます。
申し訳ありませんが、お客様の投票の記録に失敗しました。もう一度試してください。
違反を報告
レビュー を日本語に翻訳する

Eric
5つ星のうち5.0 Beautiful, but rare album.
2020年2月25日にアメリカ合衆国でレビュー済み
Amazonで購入
Despite the repetition on each song, Seefeel's "Quique" has ended up becoming one of my favorite albums ever. Love the ambient sounds mixed with cool bass lines and beat. Unfortunately, it's not really easy to find this album. But other than that, I give it an A!
続きを読む
役に立った
フィードバックを送信中...
フィードバックをお寄せいただきありがとうございます。
申し訳ありませんが、お客様の投票の記録に失敗しました。もう一度試してください。
違反を報告
レビュー を日本語に翻訳する

Trevor
5つ星のうち4.0 Outstanding.....
2017年3月31日にアメリカ合衆国でレビュー済み
Amazonで購入
One of the greatest ambient albums I've heard. This should be better known hopefully this review will improve matters. The original CD and deluxe remastered CD are getting hard to find, it's that good.
続きを読む
役に立った
フィードバックを送信中...
フィードバックをお寄せいただきありがとうございます。
申し訳ありませんが、お客様の投票の記録に失敗しました。もう一度試してください。
違反を報告
レビュー を日本語に翻訳する