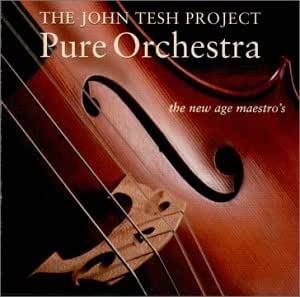 Lose yourself in a dynamic swirl of strings, horns and percussion as performed by a 60-piece Symphony Orchestra! Powerful melodies transform 13 memorable songs from the world's most popular new age composers into fully orchestrated, symphonic

The thinking behind Pure Orchestra is as follows: select 11 familiar melodies composed by New Age-related artists, arrange them for a 60-member orchestra, then hope something special happens. Alas, nothing much does. This installment from John Tesh's music factory is a decent, well-intentioned effort that may find fans among listeners drawn to symphonic renditions of pop music. Yet for anyone who holds dear the compositions addressed on Pure Orchestra (Enya's "Book of Days," Jim Brickman's "Picture This," "Marching Season" by Yanni, and so on), these lightweight, soundtrack-like interpretations will probably only make you long to hear the originals. Tesh's role here is only as a producer, not a performer, though he does include two original, though uneventful, pieces of his own ("Song for Jennifer" and "Blue"). Kenny G's "Havana" sounds as though its re-creation was being handled by 101 Strings. Meanwhile, the interpretations of two Yanni tracks pale compared to what can be found on Live at the Acropolis, and truly affecting solo pieces such as Brickman's "Angel Eyes" and "Longing/Love" by George Winston gain nothing by orchestral treatment. Sometimes it's better to leave well enough alone. --Terry Wood

Books4Wisdom
5つ星のうち3.0 Classical tradtion meets new age tradtion
2010年2月3日 - (Amazon.com)
形式: CDAmazonで購入
If you love classical music then Tesh's reproduction of various new age artists will sooth your soul just as well. The only thing I wish Tesh should have included should have been a concert hall sound because it sounds a little stiff and choppy with some songs. Overall it is an enjoyable and relaxing CD.
続きを読む
2人のお客様がこれが役に立ったと考えています
レビュー を日本語に翻訳する

Rebecca Mance
5つ星のうち5.0 Love this.
2013年10月29日 - (Amazon.com)
Amazonで購入
I have always loved John Tesh. I have everything he ever did. This is a new level and if you liked his music, this does have some of the ones you love most that you almost don't recognize....absolutely lovely.
続きを読む
1人のお客様がこれが役に立ったと考えています
レビュー を日本語に翻訳する
Amazon.comのカスタマーレビューを見る(38) 5つ星のうち4.1
Amazonプライム会員ならお急ぎ便、日時指定便が使い放題
さらに、映画もTV番組も見放題。200万曲が聴き放題 。クラウドに好きなだけ写真も保存可能。
> プライムを無料で試す