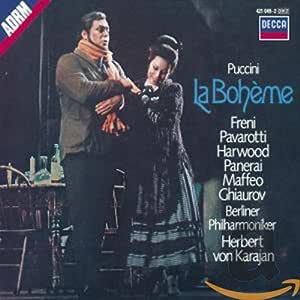 Giancarlo Stampalia
5つ星のうち5.0 top sweeping statement from karajan and his forces
2012年9月20日に英国でレビュー済み
Amazonで購入
First off, on my stereo at least, there is nothing wrong with the placement of either voices or orchestra in this recording. As one would expect from DECCA, the sonics are vivid and everything is clearly audible, with vibrant depth and fidelity. But, and here is where I think some opera lovers have a problem, those who consider the orchestra an unnecessary intrusion on the royalty of the singers might be disappointed: the orchestra here is a co-protagonist. After all, this is Boheme, not Trovatore. Puccini wrote some lively, sophisticated orchestral accompaniment, weaving it in and out of the vocal lines.

The cast is uncannily good. All the principals are at the peak of their vocal powers, and they have a blast with the score. Pavarotti shines, with incredible beauty of tone and an apparent effortlessness that is amazing. And the Berlin Philharmonic does the same. It literally sings with the singers, with great sensitivity and personality. How it sings! It's like hearing the score for the first time. One discovers how well the orchestral parts are written. When this orchestra lets loose, it is just hair-raising. Just listen to the very end of Act 2: the orchestra's phrases are played with fluid, flexible changes of tempo, first decelerating, then suddenly accelerating, with unerring force and precision, as if the Philharmoniker were one breathing organism. Exhilarating. And of course the detail one discovers here and there is illuminating. Then there are the sweeping phrases when it accompanies sentimental passages, such as much of the third act, especially Rodolfo's monologue about Mimi's illness: here the orchestra really sings, without shame, without hiding behind the tenor but side by side.

It has been said that Karajan's tempi are broad. I don't find them that broad, actually, except occasionally. When they are, the willfulness helps bring out the beauty of the melody. The opposite might be called "starving the rhythm," as Karajan biographer Richard Osborne states in his book. Taken slowly, the melody has the time to reveal its stuff, show its parts as well as the sum of its parts. Those sweeping melodies I was talking about are a case in point: taken slowly, they have time to develop force, and Karajan's sense of tension never allows them to sag in the middle, but keeps them flowing dynamically and sustains them. He is blessed here with the instruments capable of achieving this, i.e. great voices and a great orchestra. But there is definitely one man behind it all.

Johan RF
5つ星のうち5.0 Glorious remaster
2019年2月23日に英国でレビュー済み
Amazonで購入
I am not an "opera buff" , but I love my hifi and love the singing experience that is opera. On a Roksan/KEFF system this sounds utterly sublime. So for me its 5 stars easy peezee... ( see I told you I was not an opera buff ! )
続きを読む
役に立った
フィードバックを送信中...
フィードバックをお寄せいただきありがとうございます。
申し訳ありませんが、お客様の投票の記録に失敗しました。もう一度試してください。
違反を報告
レビュー を日本語に翻訳する

Robert H Sprague
5つ星のうち5.0 A stunning recording
2012年12月31日に英国でレビュー済み
Amazonで購入
Forty years on, this is still a superb recording. Mirella Freni is breathtaking when she sings, 'They call me Mimi' and Pavarotti's youthful interpretation of Rodolfo captures the essence of the story. Elizabeth Harwood's Musetta is joyously energetic and the interaction between the supporting roles is dynamic. The orchestral accompaniment is what you would expect from the Berlin Philharmonic and von Karajan. Judge for yourself!
続きを読む
5人のお客様がこれが役に立ったと考えています
役に立った
フィードバックを送信中...
フィードバックをお寄せいただきありがとうございます。
申し訳ありませんが、お客様の投票の記録に失敗しました。もう一度試してください。
違反を報告
レビュー を日本語に翻訳する

A. J. Valentine
5つ星のうち5.0 A Classic
2013年6月13日に英国でレビュー済み
Amazonで購入
Pavarotti and Freni at their best,( and also the much loved and missed Elizabeth Harwood as Musetta a lovely singer who did not record enough of her repertoire.) a classic recording that you will never tire off
続きを読む
1人のお客様がこれが役に立ったと考えています
役に立った
フィードバックを送信中...
フィードバックをお寄せいただきありがとうございます。
申し訳ありませんが、お客様の投票の記録に失敗しました。もう一度試してください。
違反を報告
レビュー を日本語に翻訳する