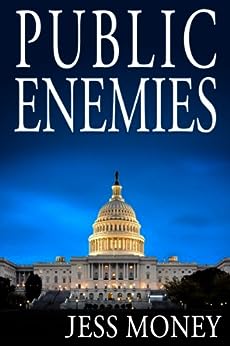 Raised in a politically active family, Jess Money majored in Political Science with a minor in Economics. He sold his first magazine article at the age of 16 and has since written everything from ad copy and political mailers to a screenplay for DreamWorks, which earned him membership in the Writers Guild of America. Along the way he had a career in professional motorsports, worked with the U.S. Womens Olympic Volleyball program, managed two of the entertainment industry's most acclaimed screenwriting programs, and worked as a bar bouncer when that's what it took to keep the wolf from the door. --このテキストは、kindle_edition版に関連付けられています。

Edward Montgomery
5つ星のうち4.0 very well told political thriller
2013年9月15日にドイツでレビュー済み
Amazonで購入
This a real page-turner even on a computer. I enjoyed the story and writing on several levels. The depth of political analysis that it took to fomulate the story engages the mind while the action churns hot and heavy. The depth and bredth of detail that brings the story to life is impressive--juicy detail and fascinating factoids in a hardboiled setting are like meat on the bone of an imaginative plot

Without wanting to give away too much, the story revolves around the efforts of one man to right the social and political injustice he sees in the US using extreme methods. The results surprise everyone. I loved the subject of the story, and even though I doubt the potential for success from the protagonist's method, it was a very interesting thought exercise. Occupy, arab spring, etc., did show the potential for spontaneous mass action and changing the conversation--sometimes even starting from the action of one person (Tunisia)--so the story had a degree of plausiblilty and the telling dazzled enough to obviate doubt--at least while one is along for the ride. A few characterizations irked me, but fit with the pulp fiction hard guy style --which was fun for the most part. I was not fond to learn the protagonist's stand on immigration policy, briefly as it was mentioned, and an oversized sex scene could have been omitted but It will be good in the move, no doubt. I highly recommend this book, especially for anyone not currently drinking the corporate government kool-aid.

DonH
5つ星のうち5.0 Public Enemies - A Great Read
2021年3月29日にアメリカ合衆国でレビュー済み
Amazonで購入
I just finished reading Public Enemies followed up with True Reform. I don't read much fiction (not since High School) however Public Enemies kept my attention throughout the read. Public Enemies should be on the bestseller list of reads and must be made into a movie. When I was done reading Public Enemies, I wanted to see the sequel book to Public Enemies. It should be known that the oligarchs are not likely going to let the states pass new US amendments just as the 2020 US election was not fraudulent, right? There is no limit to the amount of money that the Oligarchs would spend to stop Public Enemy's mentioned amendments to the US Constitution. I can see Netflix or Amazon create a series of movies on Public Enemies and the sequel. I whole heartily congratulate Jess Money on a Great Book. Let's hope for the movie Public Enemies.

Richard Bequette
5つ星のうち5.0 Absolutely Riveting
2014年2月17日にアメリカ合衆国でレビュー済み
Amazonで購入
This was originally just a book I picked up because of the reviews and the story line, but it sat in my Kindle for a while before I got around to it. Once I started reading it, I didn't want to put it down. This is a hypothetical story that describes the real world frustration and dissatisfaction with the state of our government and the out-of-control big business raping of the American dream and the subsequent actions of one man that starts a modern day American revolution. The methods, results and responses may be a bit over the top, but the action, drama and sense of "I know that feeling" shows up on every page. The Tea Party doesn't hold a candle to outpouring of anger and frustration this story will engender. I love political/action thrillers and this one didn't disappoint. I highly recommend this book, especially if you would like to see all the "entitled" politicos and high and mighty financial crooks get their comeuppance.
I would love to see this made into a movie!
続きを読む
18人のお客様がこれが役に立ったと考えています
違反を報告
レビュー を日本語に翻訳する

Kindle Customer
5つ星のうち4.0 A+ Plot, C- Editing
2014年1月21日にアメリカ合衆国でレビュー済み
Amazonで購入
With better editing, this could have been a great novel, with a well-crafted and timely plot. It poses a futuristic movement, where the political issues of today (corporate greed and its influence over government) reach a tipping point, inspired by a lone individual calling himself Tom Paine. Whether or not you agree with the politics or the means taken to achieve its ends, the novel raises interesting questions in a fictional context, creating a page-turner that does not disappoint.

This novel would have benefited from some good editing, not only being overly colloquial ("a whole nother matter"), but also eliminating the frequent locker-room evaluations of many of the female characters ("a pair of imposing tits", "In fact, she was downright hot", "reminder that she needed a good boning"). These added nothing to the story. Maybe it never occurred to the author that many women read political suspense novels and may have been put off by such references. The one sex scene was way too long and graphic, and could have been written with a lot less detail and more subtlety.

Were it not for the editing issues and a bit too much testosterone, this would have rated five stars.
続きを読む
2人のお客様がこれが役に立ったと考えています
違反を報告
レビュー を日本語に翻訳する

Nina
5つ星のうち5.0 The Second American Revolution
2014年2月1日にアメリカ合衆国でレビュー済み
Amazonで購入
I have read many novels on the topic of the vanishing freedoms and rights that were bestowed upon all Americans by the Constitution and Bill of Rights...about our current circumstances where the rich and powerful corporation s tell our government how and what to do. This is by far the best written, most thoroughly researched, most realistic, and most plausible I have ever read. It even offers solutions and gives discussion on them so you can understand. Very inspiring. I recommend this book to all Americans. Read it with an open mind. As a popular magazine says, "Don't be afraid! It's only ideas!" Good job, Mr. Money! Oh! I forgot to mention that it is a real thriller! The suspense will make your heart pound! BRAVO!
続きを読む
4人のお客様がこれが役に立ったと考えています
違反を報告
レビュー を日本語に翻訳する
すべてのレビューを参照します
トップへ戻る
Amazonについて
Amazonでビジネス
Amazonでのお支払い
ヘルプ＆ガイド
日本語ショッピングのための言語を選択します。 日本ショッピングのための国/地域を選択します。
© 1996-2020, Amazon.com, Inc. or its affiliates