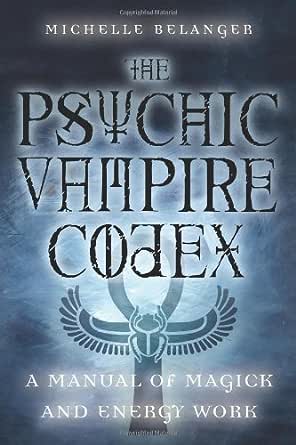 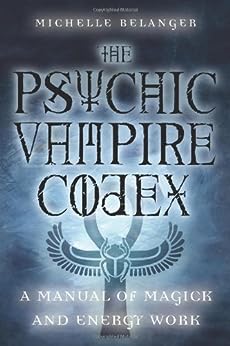 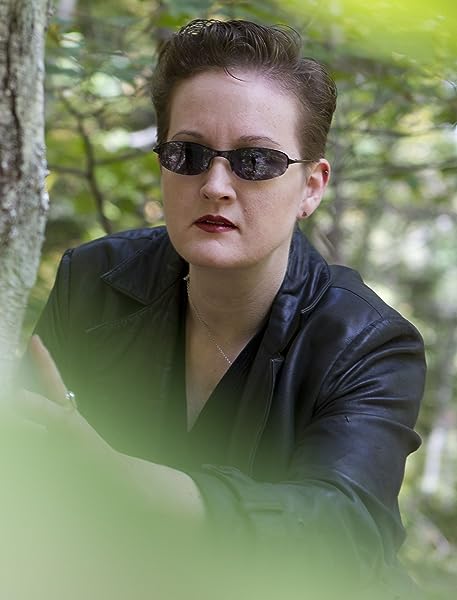 I've always loved books that give me useful and dynamic information that I can use in my personal growth and development, and The Psychic Vampire Codex is one of these books. Larry Dreller, author of Beginner's Guide to Mediumship-- "Reviews"

Michelle Belanger discovered her psychic abilities at an early age, and her affinity with psychic vampirism while in high school. She has been deeply and centrally involved in the vampire community since the early 1990s, working with many vampire luminaries as a vital part of House Kheperu. She edited and published the Gothic literary magazine Shadowdance. Belanger is a member of the Goth band URN, which performs widely in the Midwest. Belanger lives in Brunswick, Ohio. --このテキストは、kindle_edition版に関連付けられています。

Napabird
5つ星のうち5.0 Magick touch
2015年3月14日に英国でレビュー済み
Amazonで購入
This book will be enjoyed by most who are in affinity with spiritual/nature paths, reincarnation, energy work and intuitive living.

It remains one of my favourites, a comforting and informative read which after the first cover-to-cover read, can be easily dipped in and out of.
It opens with a history of vampirism, leading to modern day PSI Vamp lifestyle.. also mentions other literature and magazines that Michelle was involved with previously..and how the following grew and how kindred people came to meet.

Explained is difference between traditional vampires who feed off blood and PSI energy vamps who recycle energy from someone and return it to them, thus healing and enlightening them, a positive and wonderful experience to those sensitive enough to feel it.

If you think PSI vamps are simply people who drain others and best avoided, then you need to educate yourself and this really is the best book to do that, written compassionately and with intelligence - I also love the way Michelle avoids jargon - and there is explanation of terms at the back of the book, if needed.

Debra.
5つ星のうち5.0 another excellent one by Ms Belanger
2009年7月5日に英国でレビュー済み
Amazonで購入
Once again another excellent book by Michelle Belanger. This has answered many long standing questions for me and opened my eyes to many things. My only baby gripe is that she does direct a lot of it to her 'vampire house family' but it also has heaps of help that is of relevance to those outside of her house community too. Her other codex  The Psychic Energy Codex: Awakening Your Subtle Senses  also works very well along side this book and are, in my opinion, a team.
続きを読む
7人のお客様がこれが役に立ったと考えています
違反を報告
レビュー を日本語に翻訳する

GG
5つ星のうち1.0 Extremely misleading; attempt to sabotage both new vampires and more experienced ones .es
2019年11月16日にカナダでレビュー済み
Amazonで購入
Ms. Belanger explains that she was tortured by a malevalent god until she relented and agreed to his agendas. If this is true, it appears that "The Psychic Codex" is the result of this agenda. The vampire as described in this book is a tamed, domesticated creature happily co-existing with humanity, careful of the interests and welfare of the humans. Gone is the concept of the powerful predator, vampires set apart from and above humanity with enhanced senses and psychic abilities. Instead, in her ideal scenario, vampires are reduced to mere components or cogs of a machine, sitting in a closed room, emitting energy , refining energy and imbibing energy - like parts of an air conditioner, perhaps. This is so ludicrous and aberrant, I am surprised no one has responded to this.
Vampires and vampiresses, who truly are such, are powerful beings with greatly expanded abilities and magnificent senses. The knowledge and understandings they perceive which grow to full comprehension and becoming far exceeds anything in the human sphere. Their awareness expands, as does their abilities. This is nothing like what Ms. Belanger puts forth.
Vampires are free to follow their natural instincts and powerful inclinations.
To those who believe they might be vampires, I would recommend that you avoid this book and others that seek to codify and ritualize a vampire's existence. This is not the way to realize and become all you can be.
I give this book one star only because I could not give it -5.
続きを読む
1人のお客様がこれが役に立ったと考えています
違反を報告
レビュー を日本語に翻訳する
すべてのレビューを参照します
click to open popover
Amazonプライム会員ならお急ぎ便、日時指定便が使い放題
さらに、映画もTV番組も見放題。200万曲が聴き放題 。クラウドに好きなだけ写真も保存可能。
> プライムを無料で試す