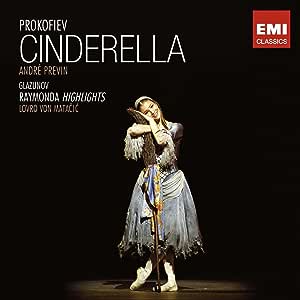 DAVID BRYSON
5つ星のうち5.0 MAGIC AND MYSTERY
2011年10月3日に英国でレビュー済み
Amazonで購入
The story of Cinderella is a magical fairytale of course, Prokofiev's music mirrors that with its own magic, which finds a reflection in turn in this fine account from Previn and the great London Symphony Orchestra in 1983. That occupies the first disc and roughly half of the second. The balance consists of elegant extracts from an earlier ballet, Glazunov's Raymonda. This selection was recorded as long ago as 1956, and I don't know whether it was even done on 33 rpm LP at such a date. It has been remastered for us now, and remastered very well too, so this first question is academic. The really intriguing, although admittedly very minor, enigma is What is the story-line of Raymonda? I have Googled the item and followed any leads that looked promising on the first page of entries, but the answer has been elusive to the point of being downright funny. Neither Wikipedia, nor Mr David Hurwitz, nor anyone else has seen fit to tell me, so the answer may be that nobody thinks that the plot of Raymonda matters very much. Well, this is only a set of snippets from the score anyway. They are pleasant enough 19th century romantic stuff in a sort of dilute Tchaikovsky idiom, but they do not inspire me with any ungovernable passion to know more about the work they are taken from, so I shall rest content with having something in my collection that ensures that von Matacic has not lived, performed and gone to his eternal repose completely unrecognised by my own musical collection.

What matters a lot more is Prokofiev and Previn. This Cinderella is a later counterpart to Previn's excellent Romeo and Juliet, and it seems to have been recorded digitally from the outset. The sound is much fuller and richer than the sound on the earlier performance, and it strikes my ear very agreeably. Previn seems to have a natural affinity with Prokofiev, and there is a sense of spontaneity and natural grace about everything in this long score. That even goes for the Irish-sounding grotesque tune that denotes the ugly sisters and their shawl: it can make its effect perfectly well without being hammed up, and Previn has better taste than to do that. The entertainment starts with an andante dolce and it all ends with an andante dolcissimo, and I found that these markings were faithfully and beautifully interpreted for us, providing a sense of pleasant expectation to begin with and grateful fulfilment at the close.

As well as handling the individual short numbers sensitively, the director must of course keep a sense of continuity and cohesion all the way through. Denied visual impact, the listener must feel that a score containing no fewer than 50 short items makes sense as a purely musical suite. Tchaikovsky in his time was well up to that challenge, Prokofiev more than any other composer took over this mantle from him, and here is as able an exponent of his ballet music as I can think of.

The recording is excellent as I indicated already, calling for no detailed comment. The liner pamphlet, like the corresponding effort accompanying Romeo and Juliet, consists of a synopsis of the plot (of Cinderella that is: concerning Raymonda there is deep and total silence here also) and nothing else. Suits me. This time the story is given as a continuous narrative and not as a systematic number-by-number list, and in fact I think that this shows good editorial judgment in both cases. As an envoi I might say that the remastered sound in Raymonda is nearly as good as the sound given to the main score.

N Louis
5つ星のうち5.0 Prokofiev never fails to delight
2019年11月2日に英国でレビュー済み
Amazonで購入
This is a lovely ballet if you've seen it on stage. Prokofiev's score is very enchanting to listen to, and the recording is excellent. There are some very beautiful pieces of music on the two CDs.
続きを読む
役に立った
フィードバックを送信中...
フィードバックをお寄せいただきありがとうございます。
申し訳ありませんが、お客様の投票の記録に失敗しました。もう一度試してください。
違反を報告
レビュー を日本語に翻訳する

mossy
5つ星のうち3.0 Cinderella CD
2020年2月18日に英国でレビュー済み
Amazonで購入
The CD arrived on 17th Feb. and was promised for 13th so it arrived too late for my music group meeting. The CD itself is excellent and I am pleased to have it.
続きを読む
役に立った
フィードバックを送信中...
フィードバックをお寄せいただきありがとうございます。
申し訳ありませんが、お客様の投票の記録に失敗しました。もう一度試してください。
違反を報告
レビュー を日本語に翻訳する

Spyder B
5つ星のうち5.0 Excellent...if you like Prokofiev
2013年3月12日にアメリカ合衆国でレビュー済み
Amazonで購入
This is a very fine recording of Cinderella. Not my favorite Prokofiev (Romeo & Juliet is my fave). But I do listen to it regularly and enjoy it. The sound quality is great and the score is interesting. Many of the pieces, especially the waltzes, are typical Prokofiev: that is, slightly discordant and the music goes in unusual directions. It can be off-putting if you like your tunes to be straight-forward (e.g. Tchaikovski, Bach, etc). But, if you like music that isn't normally heard on the local NPR station, check this out.
Warning: this isn't easy to listen to, but can be addicting.

LilyBook
5つ星のうち5.0 Ear Addiction
2014年5月13日にアメリカ合衆国でレビュー済み
Amazonで購入
Five things to know about this music:
1. Spine-tingling.
2. First enjoyed this score while watching the SF Ballet's performance of Cinderella.
3. Listened to this edition with André Previn conducting the London Symphony Orchestra and fell in love.
4. The Grand Waltz is enchantment wrapped in music notes.
5. Comes with a free MP3 version that is automatically added to your Amazon Cloud Player.