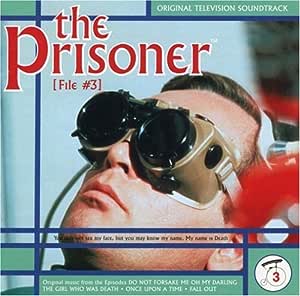 Following the travails of a resigned secret agent held captive in a strange resort/penal colony, The Prisoner was one of '60s TV's most enigmatic masterpieces. Powered by strong metaphorical currents about the nature of man and freedom, the cult show's irony-fueled musical scores are finally available in a series of three CD's. This third volume is bookended by complete, sound effects free renditions of the Ron Grainer's bracing main title themes and covers the episodes "Do Not Forsake Me Oh My Darling", "The Girl Who Was Death," and the show's exceptionally bizarre denouements, "Once Upon a Time" and "Fall Out." Split roughly evenly between existing library music and emblematic original pieces by Albert Elms and other composers, the cues gathered here are some of the show's most adventurously strange, spanning a truly dizzy melange of spacey exotica, Austin Powers-inspiring jazz-pop excursions, surreal carnival music, Indian ragas, classical toccata, electro-pop, and twisted martial tunes. Also included are key dialog snippets from the four covered episodes. --Jerry McCulley

Marcia
5つ星のうち5.0 The Prisoner file 3
2011年11月4日に英国でレビュー済み
Amazonで購入
This final disc in the set of three volumes of The Prisoner is very good and an essential one to get if you have already had volume one and two.
This disc three takes us through the episodes Do not forsake me oh my darling, The girl who was death, Once upon a time and Fall out.

The album has a variety of music pieces from the original series composers such as Albert Elms and Ron Grainer as well as established composers and their compositions which were not original to the series but heavily featured in it.
This CD highlights the diversity of music styles used in the series. The album begins with the opening main theme this time in its full version as it appeared on the episodes.
These releases are also unique because they include brief excerpts of dialogue from the actual TV series. We actually get Number Two saying things like "You must not grow up to be a lone wolf, you must conform" from the episode Once upon a time.
These excerpts are sandwiched between music tracks and they help to give the album an atmosphere and authority.
The CD presentation is excellent with some good photos from the series in the booklet. The sound is very good with a great programme of tracks.
There were other pieces of music featured in the series that are not included in these releases. For example The Beatles, all you need is love or Dem Bones from the episode Fall out. However there are plenty of familiar pieces to keep the atmosphere of the Prisoner alive.
This release along with volume one and two will appeal to anyone interested in the TV series the Prisoner.
I highly recommend this volume three along with volume one and two and if you are a big fan of the music to the show then I recommend the soundtrack releases from Network DVD. There are two CD versions. An expensive three disc set The Prisoner Original Soundtrack [3 disc set ] or a highlights CD. However this release it great on its own with its music and actual clips from the show.
続きを読む
4人のお客様がこれが役に立ったと考えています
違反を報告
レビュー を日本語に翻訳する

D. A. Campbell
5つ星のうち4.0 BCNU
2009年11月9日に英国でレビュー済み
Amazonで購入
When TV station Channel4 broadcast "The Prisoner" in the winter of 1983/84, the ultimate episode,"Fall Out, was eagerly anticipated. Since I didn't have a VHS recorder, I recorded the soundtrack of "Fall Out" to audio cassette. I listened to that tape many times until some of the music cues became embedded in my mind. I recently purchased "The Prisoner" on Blu-ray and read the included book, written by Andrew Pixley, which details every music cue used in each episode and in which scenes it was used. So I was able to find out that some of my favourite tracks had titles like "Rag March", "September Ballad" & "Lunar Landscapes". The final two episodes produced for the series ("Girl who was Death" & "Fall Out") made extensive use of music cues and these make up the bulk of the most interesting cues here. The complete opening title theme is also included. The sound quality of the cues is good and sound much better than they do in the actual soundtracks. However, many are clichéd and very much of their period. But it is a good collection and the included liner notes are attractive and informative. Recommended for Prisoner addicts who must have everything associated with the series.
続きを読む
2人のお客様がこれが役に立ったと考えています
違反を報告
レビュー を日本語に翻訳する

David Leikam
5つ星のうち5.0 The Prisoner Essential - Buy Now!
2013年3月16日にアメリカ合衆国でレビュー済み
Amazonで購入
I'm very glad to have purchased this wonderful 3 CD collection (File #1-3) when I did as it has now rocketed up in price this week quite a bit, especially #3 but it is an excellent essential audio collection for any true fan of the original The Prisoner television show (1967-1968). The chronological dialogue clips lifted directly from the show interspersed throughout the lovely late 1960's incidental music tracks are well selected. Buy this if you don't already own it and try to purchase it at a reasonable price but it is rather well worth it if you have the money to spend at any price. This is a unique collection for a unique television program.
続きを読む
違反を報告
レビュー を日本語に翻訳する

Patrick Harris
5つ星のうち4.0 Great compliation, but..
2019年8月15日にアメリカ合衆国でレビュー済み
Amazonで購入
This is a great compilation, but why did they not include The Beatles, The Four Lads and Carmen Miranda Songs listed in the liner notes? I already have a copy of All You Need is Love, but not the other two songs. I have been trying to find Dem Bones for years. I deducted one star for this.
続きを読む
違反を報告
レビュー を日本語に翻訳する

TJD
5つ星のうち5.0 Great Complilation
2015年9月8日にアメリカ合衆国でレビュー済み
Amazonで購入
Another great compilation of Prisoner music. I recommend buying all three volumes. Together, they capture the majority of the themes and incidental music cues. Just too bad Ron Grainer did not compose more than the theme and a small bit of the cue music. Note: If you want more of Grainer's Prisoner-like music, find the soundtrack for The Omega Man.
続きを読む
違反を報告
レビュー を日本語に翻訳する
すべてのレビューを参照します
Amazonプライム会員ならお急ぎ便、日時指定便が使い放題
さらに、映画もTV番組も見放題。200万曲が聴き放題 。クラウドに好きなだけ写真も保存可能。
> プライムを無料で試す