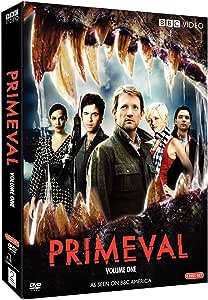 Primeval was created by Britain's ITV as a big-budget primetime Saturday rival to the success of the BBC's Doctor Who. But unlike some efforts to buy big ratings, there's actually a lot of entertainment throughout the series. The crux of the show surrounds a series of strange creatures from both the future and the past who appear to be roaming around in the present day. So what's going on? And what can be done about the dinosaur-esque creatures, big insects, and assorted parasitic life forms that are suddenly roaming the Earth? That's where professor Nick Cutter and his team come in, and the fun really begins.

A surprisingly human action-drama, Primeval clearly draws influence from Doctor Who, and while it never really threatens to rival it, it is nonetheless a good show in its own right. The special effects are suitably smart, but, more importantly, there's also a half-decent script at the heart of things, and that really does help lift the show.

The second season finds Cutter and his team once again dealing with creatures quite literally out of their time. But this time, Primeval has a few more tricks up its sleeve. Because while the convention for much of season 1 was that the creatures that faced Cutter and his crew were arriving from the past, this time round there are monsters from the future to worry about too. Cue the likes of a woolly mammoth on the motorway, and a raptor-esque chase around a shopping center. The show then blends in some twisty narratives surrounding the characters themselves, which--while not particularly intricate or surprising--do keep up the fun, and it does its best to throw as much at the screen as it can. Primeval is very good fun, worth rewatching, and suitable for family viewing too. --Jon Foster

Douglas Henshall, Andrew Lee Potts. A zoology professor and a team of experts are struggling to find answers when both prehistoric and futuristic creatures are passing through holes in the fabric of time and rippling into present-day time posing a serious threat to humanity. 13 episodes on 4 DVDs. 2007-2008/color/9 hrs., 45 min/NR/widescreen.