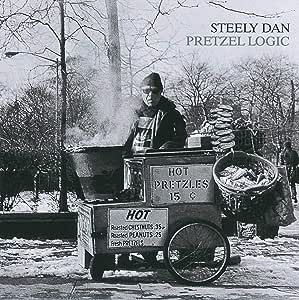 Has it really been 25 years since Steely Dan thrust into the Top 10 with Pretzel Logic ? It's true-so now's the perfect time to celebrate their landmark 1974 album. Here are Rikki Don't Lose That Number; Pretzel Logic , and the rest of the original album, with (for the first time on CD) complete lyrics and all original graphics and notes. Plus-new liners by Walter Becker and Donald Fagen!

The Punk Panther
5つ星のうち4.0 Monkey in your soul...
2018年11月3日に英国でレビュー済み
Amazonで購入
For many, "Pretzel Logic" is Steely Dan's best album. Funnily enough, of their "big seven" albums between 1972 and 1980, it is my least favourite. The songs are shorter but not necessarily poppier, in some ways I just find them a little less outstandingly brilliant than on some of the others. Maybe I am being nitpicking, after all, this is still a solidly good album. I need to re-assess it.

"Rikki Don't lost That Number", with its rhythmic, syncopated opening, is a marvellous opener, however, and "Night By Night" is a delicious piece of horn-driven funk rock. "Any Major Dude Will Tell You" is a melodic and catchy in a laid-back soulful way. There is a confident, smoky jazzy feel to it. The effervescent but tuneful "Barrytown" is captivating. In fact, these first four tracks have been superb. It is in the middle part of the album that things fall down a bit, for me, just a little.

"East St. Louis Toodle-Oo" is a ragtime-esque jazzy instrumental which is pleasant enough, admittedly, but it ain't no "Reelin' In The Years". "Parker's Band" is a short, punchy, upbeat and soully rocker. "Through With Buzz" is a half-baked song, to be honest, it lasts just a minute and a half and is over before it has really got going. The title track is more like it, though, The Dan play the blues on the verses, before reverting to typically Steely Dan on the chorus. One of the album's best cuts, this one. You know, I am listening to this stuff in 2018. It is already forty-four years old, yet it doesn't really sound dated at all. The world was a totally different place in 1974, yet music like this was way ahead of its time.

"With A Gun" is a lively Beatles-ish track in places, with a Lennon-esque lyric. "Charlie Freak" is a jaunty piano-driven number with a bit of a late sixties psychedelic pop feel about it. "Monkey In Your Soul" is an enjoyable saxophone, guitar and bluesy bass upbeat romp to end and album that I have enjoyed revisiting, but still I don't enjoy as much as I do the others, which I feel have longer, more fulfilled songs on them. There is some seriously good stuff early on in this album, but the second half is somewhat patchy. For me, anyway.
続きを読む
4人のお客様がこれが役に立ったと考えています
違反を報告
レビュー を日本語に翻訳する

kevin p. hardiman
5つ星のうち4.0 The Dan.
2020年8月18日に英国でレビュー済み
Amazonで購入
Descent album from the Dan, not quite up to their usual standard but still good. Excellent quality cd.
続きを読む
違反を報告
レビュー を日本語に翻訳する