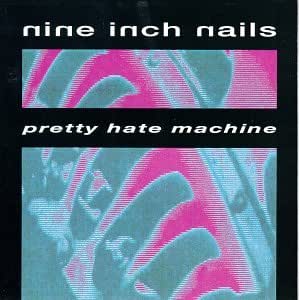 Considered the breakthrough album that delivered a more palatable version of industrial music to the commercial audience, Pretty Hate Machine left its dingy mark on pop culture. The abrasive "sonarchy" of the album was first churned by despondent club-goers who roiled with the rhythms and aligned with the angst-ridden convictions. Since its release, the album's tempered deviations came to signify an aesthetic reverie for machine-driven martyrdom. Permeated by hissing engines and dissonant strains, the tracks cascade outside channels of modern complacency. Hits like "Head Like a Hole" and "Down in It" are recognized by the acidic beats, piercing riffs, and lyrical hostilities which snare the listener with disparaging rhapsody. Not for the light-headed, Pretty Hate Machine afflicts the inner sanctum and strikes a nerve. --Lucas Hilbert

Unavailable in the U.S.! Originally released in 1989, this import version of the Industrial act's debut album features the same 10 tracks as the deleted U.S. pressing on TVT. Includes the singles, 'Head Like A Hole', 'Sin' and 'Down In It'. Universal. 2004.

RexBo
5つ星のうち5.0 A seminal album gets a new lease on life!
2011年11月25日に英国でレビュー済み
Amazonで購入
I can still remember when I first heard this album. Nine Inch Nails was just starting, and they were about to explode onto the music scene. Its dark, gritty sound may be too much for some people sometimes, and the video clips exude a dark doomsday vibe that was so prevalent in the first part of NIN's career. I loved the original with all of its distortion and pumped up mixes, this album could bite! Since the grittiness that appealed to me is such a vital part of the album's mood I wasn't sure if remastering would actually make sense; after all, the whole point of remastering is to clean up, polish and remove 'unwanted' noises and artifacts. Wouldn't this destroy the album's very essence? Well, leave it up to Trent Reznor & all. to bypass this trap and come up with the same nasty, dark, gritty mood as the original, only better! The tracks are more vibrant and dynamic, and it feels like the album tracks fit better together now. In short, this is a must have for all NIN fans, even if you already own the original, and a pretty great album for anyone else (that is not afraid of the dark or creepy noises...).
続きを読む
1人のお客様がこれが役に立ったと考えています
違反を報告
レビュー を日本語に翻訳する

AJ
5つ星のうち5.0 Where it all began....again
2014年5月28日に英国でレビュー済み
Amazonで購入
A remastered version of NIN's ground breaking first album, I picked this up in preparation for their recent European Tour to reintegrate myself with these classic slabs of dark industrial pop.

The remastered sound quality is magnificent and gives the 80's synths and drum machines an extra sharpness missing from the original recordings, the guitars are crisp and the the vocals crystal clear. Extra additional Queen cover included in the release also.

lollipopsandcrisps
5つ星のうち2.0 Definitely not the version to get!
2020年4月20日に英国でレビュー済み
Amazonで購入
BEWARE, this is the 2011 reissue and NOT the superb 2010 remaster. Avoid at all costs!
The two star rating is purely based on the issue around sound quality, the music itself is excellent of course. I perhaps should stress that these songs don't actually sound bad, its just that (for once) the remaster is SO good it renders the original version completely redundant, and why have an inferior version?
続きを読む
違反を報告
レビュー を日本語に翻訳する