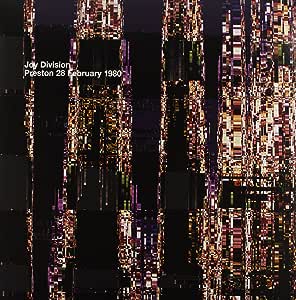 P. V. Rice
5つ星のうち5.0 No Division ,Deep Joy
2016年12月1日に英国でレビュー済み
Amazonで購入
This review refers to the Drastic Plastic 200mg vinyl issue.
I was fortunate enough to see Joy Division at Eric's Club ,Liverpool, around the time of this gig and remember the Intensity of Ian Curtis,like he was trying to claw his way out of an ever decreasing tunnel. He left the stage for about 20 minutes,we later discovered that he had a seizure,so the band just winged it until Ian reappeared. I recall their equipment being pretty crappy and that was an issue at Preston,as noted by other reviewers,but it merely spurs them on to give a fearsome performance!
The Drastic Plastic blurb says they dealt with the band's management to get the best possible sound and I'm inclined to believe them.
Like all great bands,their identity is more than the sum of their parts and so it is here.
It has a flavour of Metallic K O about it,seasoned with angsty foreboding.
Young Bernard was always rated as a crap guitarist,if technique and precision is the template,but like Neil Young,he is sloppy on occasions ,yet no one sounds like him.,nor fits this band more perfectly
Yes,there are duff bits,occasionally but they just serve to hold your attention and recovers quickly.
I wonder how many chose to miss the coach 'leaving in five minutes',as announced by a young lady over the PA,early on in the gig?
She's lost control,indeed.

casio smith
5つ星のうち4.0 shambles or brilliant ?
2010年8月29日に英国でレビュー済み
Amazonで購入
if joy division had gone on to make a dozen high quality live albums this cd would be unsellable to all but the most fanatical half dozen jd fans. As it is there is only the paris and the few paradiso tracks which reach that standard, so the scramble is on for next best, you can find the odd track here and there on the live bits of the remasters a few on youtube, and then there is this......
Now the actual quality of the sound RECORDER is actually pretty good for the time mixing desk, the problem here is the sound coming out of the speakers where it all goes wrong, and yet the appeal here is the disintegration of the music and a desperate attempt to recover towards the end of the set.
it starts with decent sound (although curtis guitar is too loud) on incubation, as far as i know this is the only live recording of incubation. wilderness is also ok. Then the sound disintegration starts on 24 hours, and then more downhill on the eternal, ians voice is out of tune ? or the synth is, to a non joy division fan this would sound like some 4th rate joy division cover band on their worst ever night, and yet by sheer luck a lot of it sounds surrreal quite beatifull in an accidental way the echoes get longer as you go through the song and total technical breakdown seem imminent.This seems to happen during heart and soul as ians echoes get longer and an overall incoherent point of collapse sound continues.
From shadowplay onwards the band sem to try harder from sheer frustration (and the higher tempo songs dont seem quite as bad)the sound is still pretty terrible throughout perhaps with a very slow slight improvement towards merely bad, colony and interzone the band heroically battle on and by the last track they seem to be on the point of exhaustion/ giving up/ quiiting the music business, still they stagger over the finish line and the crowd sems to like it anyway. So there it is its either an heroic battle against crap equipment with some happy accidental surrealism on the slower numbers or an absolute disaster of a gig, one thing for sure there will never be another performance by joy division.

KM
5つ星のうち5.0 Essential for any Joy Division fan.
2016年7月12日に英国でレビュー済み
Amazonで購入
Sure you have to put up with the dodgy equipment but that's part of the charm. Whilst listening to this album you can really imagine being at the gig yourself and it makes for a great way to experience Joy Division differently.
続きを読む
役に立った
フィードバックを送信中...
フィードバックをお寄せいただきありがとうございます。
申し訳ありませんが、お客様の投票の記録に失敗しました。もう一度試してください。
違反を報告
レビュー を日本語に翻訳する

Michael Patriksson
5つ星のうち4.0 A fine example of a great live band cut short.
2015年4月1日に英国でレビュー済み
Amazonで購入
Having re-visited some live shows of theirs lately I can now say that this one is not exactly up to par with Les Bains Douche - disregarding that the latter vinyl also include songs from other shows (which are also very good). If you only need one live disc, you do have the remastered cds, one might hope, but this is well worth the money, too.
続きを読む
役に立った
フィードバックを送信中...
フィードバックをお寄せいただきありがとうございます。
申し訳ありませんが、お客様の投票の記録に失敗しました。もう一度試してください。
違反を報告
レビュー を日本語に翻訳する

I've got the reissued "lavender vinyl" version, the vinyl and sleeve are decent quality, vinyl plays decent even with the long play time. Yes, this is not on the sound level of a studio recording, this is not a prepared professional recording of an arena show. Joy Division was an indie band playing a club, and this is a basic recording. Yes, the sound could be better, but if you love Joy Division you will enjoy.

GB
5つ星のうち5.0 Buy Me!
2019年7月2日にアメリカ合衆国でレビュー済み
Amazonで購入
Great pressing. Highly recommended.
What is funny about this is the band looks down on the night for all the technical problems but it made for an amazing recording. Do your self a favor and get this.