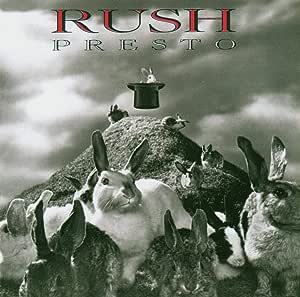 ratmonkey
5つ星のうち4.0 Slight of hand
2012年4月11日に英国でレビュー済み
Amazonで購入
As the last 80s album. this has a similar sound to their previous 3 or 4 albums but lacks a certaing cohesion that made them so good. That said it is still a force to reckoned with and has so many good tunes it's hard to absorb.

Opener 'Show Don't Tell' is not one of my favourites but it is hard to argue with such honed songwriting ability. It has hooks, riffs and melody that would be the envy of any self-respecting writer. ' Chain Lightning' is sufficiently catchy also but fails to produce such long-term recall, almost as if this is a filler track, which is a testament to the band's strengths as it is not bad by any stretch. 'The Pass' is the first truly great song here. It harks back to material from Grace Under Pressure, is mellow but uplifting, a trademark Rush song. 'War Paint' is another very catchy track but sounds slightly deflated. Maybe it's the production, but it seems a little flat. 'Scars' falls under the same malady, but these are both 2 good songs as their melodies and rhythms still make a mark.

It's with 'Presto', 'Superconductor' and 'Anagram(For Mongo)' where the true essence of the album is laid bare. These are 3 dissimilar but equally transformative songs. Each are catchy, hook-laden and near perfect pieces of work, material that will be listened to by this reviewer for a very long time. They are the jewels of this album. 'Red Tide' is good but could have been removed and no harm would have been done. 'Hand Over Fist' and 'Available Light' are both excellent examples of Rush's inate songwriting nous.

Not a complete triumph when compared to the previous 3 aor 4 albums but it showed the beginning of a transition period for the band, moving away from the heavy synth sound that typified the 80s and onto a more stripped down, alternative sound that was to become indicative of the grungey and unsure world of music in the 90s. But as always with Rush, the tunes speak for themselves.
続きを読む
5人のお客様がこれが役に立ったと考えています
役に立った
フィードバックを送信中...
フィードバックをお寄せいただきありがとうございます。
申し訳ありませんが、お客様の投票の記録に失敗しました。もう一度試してください。
違反を報告
レビュー を日本語に翻訳する

Cubby Kovu
5つ星のうち4.0 The Return of guitar driven music
2012年4月29日に英国でレビュー済み
Amazonで購入
show don't tell the first song starts of sounding like it will be another synth album until the blast of guitar and bass then you realise this is going to be an excellent album and also another change in style for the band,
Excellent inventive guitar as always by Alex, Nice punchy bass lines and powerful clear, driving drums be Peart ( can't spell first name)
there is still a little bit of synthesizer but its alot less than on the last two or three albums, and while I like those albums its nice to see alex back to the forefront, and good powerful driving album.
Show don't tell is a pretty good opener but its not the best song on the album I don't think.
The album it self does sound Firmly very eighties which I actually like alot,
the next song Chain Lightning is cool but something about it just isn't particularly catchy
The Pass ( one of the bands favourites) is pretty good and catchy (probably why it is one of their favourites)

the production is really crisp and clear and very very good but some how not particularly sterile sounding. It sound stereotypically like the period of change that happened in the very late 80's and early nineties which is crystal clear sound quite spacious sounding, but with on this album at least very audible low end, as things were turning digital lots of album in this period were rather tinny but this one isn't which is good.
Geddy Lee seems to have toned down the complexity of his bass lines on this album, and they have definatley concentrated on how the over all song sounds rather than how their individual parts sound.

All in all a Fine albums and for some a fine (return to form) I don't consider it a return to form because I don't think they ever lost their form they just chose to use different sounds and instruments for a while ( innovative some would say)
続きを読む
4人のお客様がこれが役に立ったと考えています
役に立った
フィードバックを送信中...
フィードバックをお寄せいただきありがとうございます。
申し訳ありませんが、お客様の投票の記録に失敗しました。もう一度試してください。
違反を報告
レビュー を日本語に翻訳する

José Henrique
5つ星のうち4.0 Rush - "Presto"
2018年8月14日に英国でレビュー済み
Amazonで購入
This is the band's thirteenth studio album. It was released in 1989. The trio maintains the category with bands not so hards, but has quality. Whoever likes the band should find it interesting and well played with tracks that leads to a pop-rock. It's a band that has record in their songs, you know it's Rush. It is notorious. The fifth track, "Scars," may be the one that disagrees a bit without being uninteresting. The tracks "The Pass" and "Presto" may be the best. OK! Note 7.
続きを読む
役に立った
フィードバックを送信中...
フィードバックをお寄せいただきありがとうございます。
申し訳ありませんが、お客様の投票の記録に失敗しました。もう一度試してください。
違反を報告
レビュー を日本語に翻訳する

Andrew Hill
5つ星のうち4.0 Presto vinyl reissue
2016年2月10日に英国でレビュー済み
Amazonで購入
I've knocked a star off due to surface noise of the vinyl at the intro to Show Don't Tell which is quite annoying. Other than that this is better sounding than my two CD versions. The bottom end is significantly improved along with a bigger sound stage. The songs speak for themselves: classic late '80's Rush.
続きを読む
役に立った
フィードバックを送信中...
フィードバックをお寄せいただきありがとうございます。
申し訳ありませんが、お客様の投票の記録に失敗しました。もう一度試してください。
違反を報告
レビュー を日本語に翻訳する