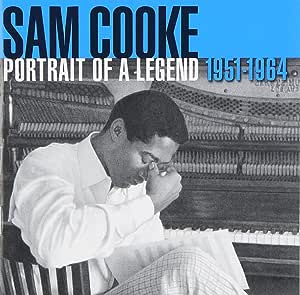 The greatest single-disc Sam Cooke collection ever, 30 tracks in SACD sound! Includes You Send Me; Chain Gang; Twistin' the Night Away; Shake; Little Red Rooster; Good Times; (What a) Wonderful World; Another Saturday Night; Cupid; Only Sixteen; A Change Is Gonna Come; Having a Party , and more career highlights. Indispensable!

The Punk Panther
5つ星のうち5.0 Change is gonna come...
2018年7月17日に英国でレビュー済み
Amazonで購入
This is probably the definitive compilation of Sam Cooke’s work. The sound on it is excellent, considering the late fifties/early sixties dates of the recordings.

I remember reading once that Rod Stewart spent a period in the late sixties/early seventies listening to nothing else but Sam Cooke. He was probably exaggerating a bit, but you can sort of understand where he was coming from. The man just had the most mellifluous, beautiful, sweet soul voice. He made any song he touches something special, even some of the more twee ones are raised up skywards in his hands. The first track is a gospel one, showing Cooke’s church roots, and is entitled ”Touch The Hem Of His Garment”. One almost has similar feelings about Sam Cooke upon hearing his sublime voice on some of these recordings

My own personal favourites are “You Send”, “Only Sixteen”, the underrated, soulful “Just For You”, “Cupid”, “Wonderful World”, the evocative “Chain Gang”, “Bring It On Home To Me”, “Meet Me At Mary’s Place”, the rocking, lively “Twistin’ The Night Away”, the toe-tapping “Shake”, “Having A Party”, the infectious “Another Saturday Night” and the simply joyous “Good Times”.

For many, though, the outstanding track is the Civil Rights anthem, “Change Is Gonna Come” which is as solemn and pure as Cooke ever got. None of his lightness of touch needed here. He also covers jazz standards like “Summertime” and “I Love You (For Sentimental Reasons)”, the blues of “Little Red Rooster” and country in “Tennessee Waltz”.

“Everybody Loves To Cha Cha Cha” is an example of a poppy, somewhat cheesy song made heavenly by Cooke’s vocal delivery. He certainly was one of the best soul singers the world has ever known and never quite got the credit he fully deserved.
続きを読む
10人のお客様がこれが役に立ったと考えています
違反を報告
レビュー を日本語に翻訳する

Mark Barry
5つ星のうち5.0 "...You Send Me..." - Portrait Of A Legend 1951-1964 by SAM COOKE (2003 Abkco DSD CD Remasters)
2015年1月13日に英国でレビュー済み
Amazonで購入
For over 10 years I've been meaning to review this small slice of Audio magnificence by the mighty Sam Cooke - and now with its price hovering just above a five-pound note - it's time to plug its merits as a bargain-CD par excellence. "You Send Me" is damn right...here are the Soul Man details...

A small army of skilled experts were involved in this prestigious project on the audio front (the results are sensational) - Restoration Producers were JODY KLEIN and TERI LANDI, Analogue To Digital Transfers were carried out by Teri Landi, RICK ESSIG and MICK GOCHANOUR, Sound Restoration by STEVE ROSENTHAL, DSD (Direct Stream Digital) Engineer GUS SKINAS (and others) and finally mastering by the legendary engineer BOB LUDWIG.

While the opening tracks from the Fifties are really good - it's not until you get to the late Fifties and Sixties does the sound hit you for six - every song properly gorgeous. The combination of his simple tunes, that sublime genuinely Soulful voice and the fabulous Production Values afforded to his recordings - gives a combo that will have your jaw hit the carpet on more than one occasion. In my estimation there are only two other artists with this level of audio brilliance and care bestowed on them - Roy Orbison's Monument recordings and Elvis Presley's stay at RCA (both Mono and Stereo remasters handled by Vic Anesini). I remember hearing these Sam Cooke remasters back in 2003 when they were first issued on a Hybrid SACD/CD disc in a card digipak (nowadays this reissue sports a jewel case but still has the excellent 24-page booklet with the track-by-track PETER GURALNICK liner notes) - I was blown away then - and relistening to them in 2015 is no different.

Take a song like "Nothing Can Change This Love" - the audio quality achieved here is juts beautiful - the fantastically cool swagger of "Little Red Rooster" with stunning Organ jabs from Billy Preston is the same. By the time you get to the glorious majesty of "A Change Is Gonna Come" in Stereo with its gospel-stirring melody and message of equality and integration - resistance is frankly futile. Sam Cooke was one of the greatest singers to have ever graced the planet - and on a song like "A Change Is Gonna Come" - touched by something way bigger than ego.

A point worth making is that "Portrait..." is an overall career retrospective - many who bought "The RCA Albums Collection" 8CD box set (which I've also reviewed) were disappointed to find that it did not contain any of the huge Keen Records hits from early in his career - stuff like "You Send Me", "Cupid", "Only Sixteen" and "(What A) Wonderful World" - some of his most famous and beloved songs. This set has those gems in fabulous audio. Other stunners include "Bring It On Home To Me" with Lou Rawls giving it some superb duet vocals (Sam gracefully letting him shine) and the lovely optimism that permeates through "That's Where It's At" and "Just For You".

It ends where Sam Cooke started - his first recording session in 1951 with The Soul Stirrers for Art Rupe's Specialty label - even then he sounded angelic in the truest sense of the word. As I've pointed out above - there's an unannounced hidden 31st track called "8 Bars Of Soul". It's 36 seconds of an interview Cooke did with the progressive US DJ Nathan "Magnificent" Montague (championed Soul music and non-violence) who asks Sam to sing "8 Bars Of Soul" (which Cooke dutifully hums). Nathan then ominously purrs to his listening audience - "Sam Cooke's yours...he'll never grow old..."

And he doesn't grow old in our hearts...because of quality restoration work like "Portrait Of A Legend..."
There are other compilations but don't settle for less - this is the one...
続きを読む
29人のお客様がこれが役に立ったと考えています
違反を報告
レビュー を日本語に翻訳する

Steven J.
5つ星のうち4.0 Not a SACD, though may contain DSD data
2016年12月29日に英国でレビュー済み
Amazonで購入
This is a great album but I'm writing this review regarding many claims I see in the reviews regarding the fact it's a SACD (Super Audio CD)... well, it isn't. There is no SACD logo on the packaging/booklet and no mention on the cover or the liner notes that it is a SACD except for the fact it uses DSD encoding and there's a small DSD logo on both the outer cover and the disc itself (though it's not clear whether this was merely used in the process of recording from the master tapes or it is actually a disc containing DSD data). I have four SACD players... two Sony BluRay players (who as the inventor of SACD, you'd have thought their drives would play the SACD layer if it existed on this disc), a Pioneer BluRay player and a Denon DVD player, all of which have no problem whatsoever playing other SACD discs I own and clearly list the fact in their displays (and secondly confirmed by my DSD compatible AV Amplifier which confirms it is receiving and processing a DSD stream) but this Sam Cooke disc absolutely refuses to play anything but a standard PCM/CD Audio encoding. I've heard Sony PS3 consoles may be able to play this sort of DSD disc but I haven't access to one to test it out unfortunately. It still sounds great though, and in fairness most songs are so old as to be (IMO) of little extra benefit with the extra dynamic range that SACD can give, but thought it worth writing this review so as to warn others who may also have trouble trying to get the disc to work with DSD output.
続きを読む
9人のお客様がこれが役に立ったと考えています
違反を報告
レビュー を日本語に翻訳する

Butterfly
5つ星のうち5.0 Amazing!
2017年11月20日に英国でレビュー済み
Amazonで購入
I previously bought Sam Cooke The Absolutely Essential 3CD Collection which I absolutely adore! After buying Sam Cooke Portrait of a Legend (apt title!) it has only managed to solidify how much I love Sam Cooke! This album is fantastic, as is all of his work. There are my personal favourites on this album - A Change is Gonna Come, Twistin' the Night Away, Cupid, Bring it on Home to me, and many more favourites that get you clicking your fingers and tap tapping your feet along to the beats. His unique soulful voice, filled with depth and emotion, and the nuances he brings to each note just warms my heart to the core. This is a must have CD for those who love Sam Cooke.
続きを読む
2人のお客様がこれが役に立ったと考えています
違反を報告
レビュー を日本語に翻訳する

Ron Hoare
5つ星のうち4.0 Great ... But?
2017年1月10日に英国でレビュー済み
Amazonで購入
A few years ago I realised that Sam Cooke had one of the all time great voices, so wondered why I had heard so much less of him than other great vocalists like, say Otis Redding. This album will give you the answer. There are some great songs, including one of the all time greats; A Change Is Gonna Come, which amazingly isn't on some of the other Sam Cooke compilations.

The problem is that the songs are mixed and packaged for a white 50's to 60's middle of the road audience. To hear that great voice and then hear it on a great song like "Little Red Rooster", which is so badly produced here is, quite frankly, very sad.

Buy this album and love the joy that Sam's voice will bring to your life. In a reflective moment wonder if one of his mates recorded some stuff when he was just mucking around and offer your soul and your house to hear it.
続きを読む
3人のお客様がこれが役に立ったと考えています
違反を報告
レビュー を日本語に翻訳する
すべてのレビューを参照します
Amazonプライム会員ならお急ぎ便、日時指定便が使い放題
さらに、映画もTV番組も見放題。200万曲が聴き放題 。クラウドに好きなだけ写真も保存可能。
> プライムを無料で試す