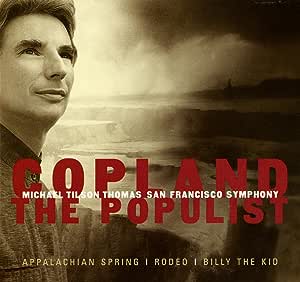 The three Copland classics on this disc--Billy the Kid, Appalachian Spring and Rodeo--are all ballet scores, and from the very first bars of Billy, with its evocative depiction of the wide-open prairies, you are firmly in the territory of music that tells a story. But you don't need to follow all the ins and outs of each story to enjoy music which paints as vivid a picture of rural America as you could hope for. If the sprightly "Hoe Down" from Rodeo brings a splash of colour to concert programmes, the remarkable thing about so much of the music in these three pieces is how quietly sensitive it is. And while Michael Tilson Thomas does not hold back in wringing every last ounce of splashy razzmatazz, he is equally the master of introspective music which clearly demonstrates that you don't need to be loud to be a populist. The recordings were made in the San Francisco Symphony's home, Davies Symphony Hall. You couldn't hope for more authentic performances than this--more than 76 minutes of dyed-in-the-wool Americana. --Keith Clarke

WM
5つ星のうち5.0 Love it
2013年4月13日に英国でレビュー済み
Amazonで購入
I bought this for the not often heard extended version of Appalachian Spring. It's much enhanced by the part so often omitted. There is also a magic about this recording so I find it doubly rewarding.

Well worth the money for Appalachian Spring alone but the other pieces are giving a good outing as well.

jt52
5つ星のうち5.0 Very fine Tilson Thomas recording of Aaron Copland's most famous music
2013年4月30日にアメリカ合衆国でレビュー済み
Amazonで購入
Alex Ross' book on 20th-century music "The Rest is Noise" is distinguished by some fine primary research of historical sources, not the least of which is his look at the trend towards popular art in post-New Deal art of the 1930s. This populist streak was linked to Socialist ideology and an admiration for Communist Russia. Prominent examples are the opera "The Cradle will Rock", many novels (perhaps best exemplified in Christopher Isherwood's novella "Prater Violet", inspired by a filmmaking experience in the 1930s, which has an explicit message that art must return to its populist roots) and - the subject here - composer Aaron Copland's turn away from the modernist style he pursued into the mid 1930s and towards a more populist idiom.

This turn, certainly socially abetted by Copland's position as a gay Jewish New Yorker with heavy ties to bona fide socialists, was a felicitous one from an artistic perspective. Copland's earlier modernist music had shown a personal inclination to "white note" harmonies, simple rhythms, and transparent instrumental arrangements, a set of traits which transferred well to the new idiom Copland tackled with his opera "The Second Hurricane" and El Salon Mexico, still one of his most popular orchestral pieces. These technical characteristics work together well in an idiom slanted towards populist accessibility.

The three orchestral works programmed by Michael Tilson Thomas in "Copland the Populist" include his most famous and maybe his best score, "Appalachian Spring" (1944), and two works right behind it in terms of fame, "Billy the Kid" (1939) and "Rodeo" (1942). Tilson Thomas' typically relaxed interpretations are I think perfectly suited to Copland's style and, joined to skilled playing by the San Francisco Symphony and the excellent engineering Tilson Thomas as usual receives on his BMG sessions, makes for a perfect interpretation of the three ballets.

Tilson Thomas' "Appalachian Spring" is absolutely outstanding and by itself is reason enough to buy this disc. I compared the recording with the excellent one done by the composer and the Boston Symphony. Copland's own version is about ten minutes shorter, pointing both to Tilson Thomas' gentler tempi and the inclusion of a dark, disturbing scene with an itinerant preacher in the middle of the "Tis a fit to be simple" variations, a scene that is typically omitted. Is Tilson Thomas' interpretation definitive? I probably wouldn't use a loaded term like "definitive" but this performance is at that general level of perfection. I also compared the "Billy the Kid" with the still excellent version by Eugene Ormandy and the Philadelphia Orchestra and can say that I like both of them. As other reviewers have commented, Tilson Thomas takes a more contemplative and darker read on the outlaw's story. "Rodeo" is the least interesting of the three pieces contained here but is again played well.

If you want one Copland disc in your collection, this is it.