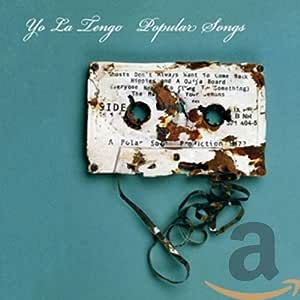 This sprawling, ambitious 2009 release is Yo La Tengo's 16th, album and marks their 25th anniversary. It is also a new culmination for a career that has been swinging upwards again since 2006's I Am Not Afraid Of You. A new generation of fans are discovering one of the most influential and intriguing bands in late 20th and early 21st century Rock 'n' Roll. This is the definitive Yo La Tengo album!

Keith M
5つ星のうち4.0 Diversity is the Mother of Invention
2011年10月7日に英国でレビュー済み
Amazonで購入
Really, can there ever have been a band more diverse and experimental than Yo La Tengo? This is another great collection of songs, albeit unfortunately probably not as 'popular' (with most people) as the album title might wish. Also for me, this album falls slightly short of its predecessor I Am Not Afraid Of You, but is still an essential offering.

Once again the band intersperses beautiful ballads such as Avalon, By Two's and I'm On My Way, with some typical extended rockers More Stars Than There Are In Heaven and the closer And The Glitter Is Gone. The heavy (What Goes On) Velvets guitar sound is perfected on Nothing To Hide, whilst soulful influences are apparent on the wonderful If It's True. The extended acoustic piece The Fireside is for me the only slightly weak song on the album (outstaying its welcome somewhat).

As well as making great albums, the band are of course superb live, and when I saw them at the Roundhouse in November 2009 they opened with More Stars Than There Are In Heaven, a 10-minute epic of mindblowing proportions!
続きを読む
役に立った
フィードバックを送信中...
フィードバックをお寄せいただきありがとうございます。
申し訳ありませんが、お客様の投票の記録に失敗しました。もう一度試してください。
違反を報告
レビュー を日本語に翻訳する

AMM,Glasgow
5つ星のうち5.0 Alternative music
2013年12月2日に英国でレビュー済み
Amazonで購入
I am a late convert to YLT and have been catching up from mid career backwards and following developments thereafter.

P. Sharpe
5つ星のうち4.0 Who says "business as usual?" This is BRILL!
2009年9月12日に英国でレビュー済み
Amazonで購入
I read a review of this album recently which said it's "business as usual for Yo La Tengo." Whoever, wrote that knows nothing about Yo La Tengo. The statement is true only in as far that it is, as usual, an excellent offering, whereas the statement kind of implies there's nothing new to offer here on the veritable smorgasbord of styles and ranges known to the Yo La Tengo template! Untrue, proof to follow!

First track, Here to Fall, introduces strings to a YLT song. OK we had some before on "I Am Not Afraid of You's..." I Feel Like Going Home, but that was a hushed ballad. These are big rousing strings similar to parts of Beck's Sea Change, albeit that this song is far more upbeat, yes and brill!

Track 2, Avalon or Someone Very Similar again is new style for YLT, its almost like a gorgeous 60s esque Camera Obscura song, it took me a while to work out who was singing but in the end it worked out to be Ira in his falsetto, this time in a dreamy way rather that the (in my opinion) brilliant quirky funk of Mr Tough off "I Am Not Afraid of You..."

Another new style is found of "If It's True" which if I had still had a cassette player would be featured on every single one of my compilation tapes for at least the next three years! It starts with a motown arrangement and blossoms into the most gorgeous boy/girl ballad I've heard since, well since YLT's Center of Gravity off their "I Can Hear The Heart Beating As One" album.

The styles of alot of the rest of the tracks can yes be tied back to some other styles explored on previous albums all of which are excellent, the quiet minimal drone soundscapes explored on "And Nothing Turned Itself Inside Out" where the melodies take ages to shout out at you but when they do they reward you fully, see By Two. The big empty open contemplative sounds like off "Electro-pura" but with Acoustic guitar playing rhythm rather than electric, see The Fireside. The rocking noisy feedback driven ten minute plus brilliance on closer And The Glitter is Gone. The punky tuneful "Nothing to Hide."

Like Electro-pura the album is subtly produced, almost mono rather than full colour stereo which is why it takes longer to "get it" and for the melodies to leap out.

And unlike "I Am Not Afraid of You..." where the monster ten minute plus songs bookended the album, on "Popular Songs" they are shoved to the end of the album (tracks 10-12), which means you can get the variety at the opening of the album without having to wait ages through a long track.

Well worth exploring. If you don't feel adventurous then at the very least treat yourself to the mp3 download of If It's True, its simply gorgeous.
続きを読む
2人のお客様がこれが役に立ったと考えています
役に立った
フィードバックを送信中...
フィードバックをお寄せいただきありがとうございます。
申し訳ありませんが、お客様の投票の記録に失敗しました。もう一度試してください。
違反を報告
レビュー を日本語に翻訳する

Jose Artiles-Gil
5つ星のうち5.0 Popular Songs for the "Alternative People".
2010年9月9日にアメリカ合衆国でレビュー済み
Amazonで購入
I confess that I feel "ashamed" at the moment of writing this review, because I cannot believe that this band has been around for 25 years, and it is now -actually since last April, when I bouhgt "I Am Not Afraid of You & I Will Beat Your Ass", and was literally stunned by it- that I have discovered them. Therefore, I am a latecomer. I was very much impressed by their instrumental dexterity as well as their creative power making songs that rock and jam at the same time, fueled by intelligent improvisations and good textural and atmospheric makeup. Definitely a very original American band, rooted at best in the tradition forged by groups like Jefferson Airplane, Grateful Deads and the Allman Brothers Band. Why calling "popular" to these songs? The only reason I can fathom is that they offer it to the "Alternative People", that part of the population that while not intending to be or feel "elitist", open their hearts to good creative expressions in any art, music, painting, literature, cinema, etc. They definitely will be from now on a priority in my listening agenda. I hope that other latecomers do the same.
続きを読む
3人のお客様がこれが役に立ったと考えています
役に立った
フィードバックを送信中...
フィードバックをお寄せいただきありがとうございます。
申し訳ありませんが、お客様の投票の記録に失敗しました。もう一度試してください。
違反を報告
レビュー を日本語に翻訳する