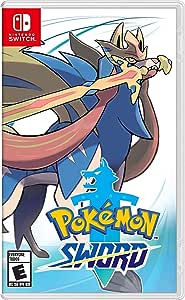 A new generation of Pokémon is coming to the Nintendo Switch system. Become a Pokémon Trainer and embark on a new journey in the new Galar region! Choose from one of three new partner Pokémon: Grookey, Scorbunny, or Sobble. In this all new adventure, you'll encounter new and familiar Pokémon as you catch, battle, and trade Pokémon while exploring new areas and uncovering an all-new story. Get ready for the next Pokémon adventure in the Pokémon Sword and Pokémon Shield games.

Jacques Rois
5つ星のうち1.0 DO NOT BUY THIS GAME
2019年11月15日 - (Amazon.com)
This is the worst Pokemon game ever. As someone who has played every mainline entry since the original Pokemon Red and Blue, I am particularly disappointed to see the quality of Pokemon games declining for the past few years. First, over 60% of all Pokemon have been cut and do not appear in any playable form in this game. All previous starters except the Charizard line and all previous legendaries, for example, have been removed by Game Freak. I have been training my Blastoise since Pokemon FireRed and transferring him to each new generation. I never thought I would see the day I could not play with Blastoise in a mainline Pokemon game. Game Freak's excuses are also unforgivable. The Pokemon models and animations are the same as those since Pokemon X and Y. The Nintendo 64 game Pokemon Stadium has superior, livelier animations than this Switch game. And they are charging $20 dollars for less Pokemon, costly Internet, and recycled models.

Look, instead, go buy Fire Emblem: Three Houses, Dragon Quest XI or The Witcher 3. These masterpieces offer a superior story, engaging battle mechanics, and modern visuals. It's a shame that Pokemon has fallen. Super Mario Odyssey and Breath of the Wild set the benchmark of what a Nintendo franchise can offer on the Switch. However, Pokemon Sword and Switch have set a new low for the series. To buy this game is to perpetuate low standards in a multimillion franchise and corporate greed from Game Freak's part. Save Pokemon and boycott Sword and Shield!

Ricky
5つ星のうち1.0 The only reason it gets one star is because I can't give it a 0 star rating
2019年11月16日 - (Amazon.com)
In short, this game is awful for advanced players, mediocre for casual player and it's desirable that this is nobody's first Pokémon game, least they get the wrong impression. It is the worst Pokémon main duo ever released and the only positive aspects are derived from the standard Pokémon formula. Being understaffed isn't even remotely enough to explain the unacceptable low quality of these games; GameFreak has serious leadership issues.

This trash heap is the result of complacency, and a lack of effort and dedication. If it had been developed with care and the consumer's satisfaction in mind, it would have been a polished title with a lot of content complementing the new features. Sadly, this is not the case.

Bugs, no endgame, half pokedex, mediocre graphics, less features than previous games...should I keep talking? Save your money and don't buy this dumpster fire of a game.

Crybot
5つ星のうち1.0 Should be better
2019年11月16日 - (Amazon.com)
Amazonで購入
Minimal effort from Game Freak. I've waited YEARS for this, and we get a subpar game. Oh well, at least I have Animal Crossing to look forward to. #GameFreakLied
続きを読む
247人のお客様がこれが役に立ったと考えています
レビュー を日本語に翻訳する

Thomas & Jessii
5つ星のうち5.0 Sword is an absolutely wonderful experience: big, bright, playful, and fun!
2019年11月15日 - (Amazon.com)
Amazonで購入
My daughter (age 9) got really into Pokemon about a year ago, leading us to playing Pokemon Let’s Go Eevee. She’s been obsessed with the franchise ever since.

Sword and Shield is a different entry into the series. Instead of a top-down, closed path game, you’re presented with a wide open world to explore, catch pokemon, and take on trainer battles.

It’s big, brightly colored, and just lovely to run around and experience. One of the biggest annoyances with “Let’s Go” was the pace of movement, and just getting around felt like a chore. Travel in Sword/Shield feels much better, and the freedom of movement and not being locked out of paths is great.

Everything else about the game follows the same basic Pokemon gameplay: catch pokemon, train them up, and battle other trainers.

There’s been some controversy about the size the pokedex (the amount of pokemon in-game), but as a more casual fan/player, there’s not really much to say. I’m sure it will be a big deal for hardcore fans, but they will still sink 100+ hours into this game.

Differences from Pokemon Shield:
As with most pokemon games it’s broken up into two difference versions, each with very minor exclusive pokemon included. Honestly, very few people will care which they get. The game is exactly the same with a couple minor differences. According to other sources here they are:

There’s also supposed to be a difference in some of the gym leaders, and potentially in which Legendary Pokemon are featured, but these are minor, and only the most hardcore fans are going to care either way which they get. Obviously I haven’t caught them all, but if the above is important to you, make sure you pick the right version!
続きを読む
197人のお客様がこれが役に立ったと考えています
レビュー を日本語に翻訳する
Amazon.comのカスタマーレビューを見る(619) 5つ星のうち4.3
Amazonプライム会員ならお急ぎ便、日時指定便が使い放題
さらに、映画もTV番組も見放題。200万曲が聴き放題 。クラウドに好きなだけ写真も保存可能。
> プライムを無料で試す