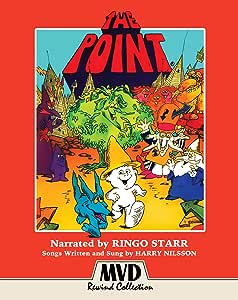 Kelly Keefe
5つ星のうち5.0 I just wish someone would explain to me why...
2018年12月7日 - (Amazon.com)
形式: DVDAmazonで購入
To the best of my recollection, this was only aired ONCE on TV. When you consider that they trot out all the Charlie Brown specials (And don't get me wrong, I love those) yearly and all those Gawd-awful Christmas specials year after year after year, WHY didn't they run this classic yearly?

If they did, maybe, just maybe, we'd have less cases of cyber-bullying, a greater understanding and tolerance of one another and less cases of children committing suicide. Despite being made 40 odd years ago, the message and medium is timeless. If you saw it as a kid, buy it. If you didn't, still buy it. I sincerely doubt you'll regret it.

Cool Breeze
5つ星のうち5.0 A sweet children's movie from my youth.
2017年2月14日 - (Amazon.com)
形式: DVDAmazonで購入
This is a very sweet animated movie I remember from the seventies.The story in the movie is a book that a father is reading to his son, who'd rather be watching television, but finally settles down to listen to his father's story and imagine the setting and characters for himself. It's animation style accentuates a child's simple, but sometimes confused point of view; it features memorable songs written and performed by Harry Nilsson and Ringo Starr's soothing British voice tells the story of little Oblio, a child born without a point of his own in a town where everyone and everything was expected to have one (the people all have pointed heads) and where the primary industry was making them. SPOILER ALERT? I'm not sure that this movie can really be 'spoiled' but I'm going to outline the entire plot in this review. I think that most people who would be interested in buying it have probably already seen it somewhere else, as it's not very well known. The movie is very charming and sweet, and while the plot tries to create some mild suspense and people seem somewhat cavalier about banishing a very young boy into the forest, I doubt anyone has ever been surprised that nothing at all truly bad happens in it and everything is set right in the end.

Oblio and his pointed dog, Arrow, are quite well liked by everyone, except the Duke, and his son, who manage to use an obscure law to have poor Oblio banished to the Pointless Forest. Everyone in town, including the King, regrets not standing up for Oblio and not questioning a law that they all come to agree was a bad one. For his part Oblio manages to remain cheerful and doesn't seem to blame anyone, even the villainous, manipulative Duke, or his snotty son. After a very short journey through the Pointless Forest, during which he encounters several quite bizarre creatures and puzzling characters, Oblio returns to the village to be welcomed back by everyone in the village, who are all relieved at his safe return and for the chance to stand up for him, except, of course, the Duke and his son.

The Duke, like any villain would, tries to insist that Oblio doesn't belong in the Village and have him thrown back out, but Oblio insists that he has something important to say and the Duke is told to be quiet so he can speak. Oblio announces that he has discovered that nearly everything in the so-called 'Pointless Forest' seems to have a point, except for the one person there who's constantly pointing, and that he has realized that everyone has a point - even himself. The King says that Oblio, "has a point," but the Duke removes Oblio's cap to prove that he doesn't, only to reveal that Oblio has grown a point. Somehow, the shock of seeing that Oblio has a point causes the Duke, and then everyone else in the Village to lose their own points and the movie ends with everyone cheerfully getting used to the idea that even though they no longer have pointed heads they all still have a point. Oblio is reunited with his family and presumably they all live happily ever after.

My grandchildren enjoyed it, and asked to watch it again. Even the adults all agreed they liked it. Everything about the movie is mild and simplistic, but it still manages to be fun and the songs are quite good. The Movie, of course has 'a point', which is that no matter how different someone might appear to be they still deserve to be treated with respect and that everyone matters, or 'has a point'. I highly recommend it to anyone with kids or grand kids. It's certainly much better than a lot of the low-budget children's animation available.
続きを読む
11人のお客様がこれが役に立ったと考えています
レビュー を日本語に翻訳する

CuzKatieSaysSo
5つ星のうち5.0 There's point to this.
2016年8月10日 - (Amazon.com)
形式: DVDAmazonで購入
My late husband and I named our first German Shepherd Arrow, how could we not? You will not find a sweeter animated feature, well worth your time, and it certainly has a point. I still have this sitting on a video tape somewhere, but I was thrilled to find it on DVD. What's my point? The point is you should watch this and so should your kids.
続きを読む
14人のお客様がこれが役に立ったと考えています
レビュー を日本語に翻訳する

Emily Van Heukelom
5つ星のうち5.0 I cry every time I watch this
2019年6月22日 - (Amazon.com)
形式: DVDAmazonで購入
I love everything about this film. The music is amazing. The art is beautiful. The story is really touching and the characters are so crazy cool!!! (Except for the mean ones of course). You don't have to physically have a point, to *have* a point. That's the lesson. Oblio (Our Hero: born pointless in the Land of Points!) and his faithful dog Arrow go on a quest to discover Oblio's "point". They meet all manner of friendly, scary, confusing, and enlightening characters on their journey. Finally they make it back home with the knowledge that everyone and everything has a point, even the ladies they meet whose "point" is simply to dance and sing and put joy in the world.
Appropriate for all ages, and truly can be enjoyed by everyone.
続きを読む
2人のお客様がこれが役に立ったと考えています
レビュー を日本語に翻訳する

Leo Hott
5つ星のうち5.0 A must have classic for the whole family...even the dog!!!!
2014年9月13日 - (Amazon.com)
形式: DVDAmazonで購入
It is a joy to be able to pick up this classic animated story on D.V.D. The picture quality is great but the music is awesome to hear on D.V.D. !!! This is the first made for T.V. feature length animated movie & sprang from the mind of Harry Nilsson!! Harry Nilsson was a genius singer song writer with a truly outstanding voice! This timeless story of the trails of being different is full of fun for the whole family. It follows the adventures of Oblio & his dog Arrow as they are banished to the Pointless Forrest where they learn everything has a point ! Oblio is banished because he was born round headed in a land of pointed headed people who are obsessed with all things pointed. Oblio's problem's really start when he defeats the evil count's equally evil child in a game of triangle toss & in his anger the count finds a archaic law demanding banishment of all things that don't have a point! This movie contains some awesome music & the song "Me & my Arrow" actually hit the charts in the 70's other great song's contained through out the story are " Everything's got E'm" "Poli High" "Think about your troubles" " Life Line" "P.O.V. Waltz" & "Are you Sleeping". Its no surprise that Ringo Starr partially narrates the story playing a father reading it to his son, as when the Beatles were asked who their favorite American band was they answered "Harry Nilsson"! John Lennon & Harry Nilsson would become close friends in time. Ironically I think Nilsson gained recognition through the movie "Midnight Cowboy" scoring a big hit with the theme song "Everybody's Talkin at Me". But Harry had many hit song's taking Badfinger's song "Without You" to #1 also having hits with " The Coconut song" More recognized as Put the lime in the coconut. & the rocker "Jump into the Fire". Harry's last project that I am aware of was the sound track to "Popeye", the man had a incredible voice & its no wonder that this movie "The Point" has climbed way beyond a cult classic to become a truly classic modern day fable & morality tale! Every one I know that saw this as a child in the 70's wants to have it to show their children. As well as bringing back endearing memories from their youth the music is timeless being just as entertaining today as when it was first written!!! With its timeless music & timeless theme Harry Nilsson's pet project has turned into a classic beautifully animated movie destined to teach generation after generation tolerance & acceptance of those that are a little different than the norm...you get The Point! This movie has been sought after by schools to be shown in the classroom, as well it should be! I would recommend this movie for all parents to add to there movie collections that have young children. Actually I would recommend this movie to everyone its just that good!!!
続きを読む
9人のお客様がこれが役に立ったと考えています
レビュー を日本語に翻訳する
Amazon.comのカスタマーレビューを見る(283) 5つ星のうち4.7
Amazonプライム会員ならお急ぎ便、日時指定便が使い放題
さらに、映画もTV番組も見放題。200万曲が聴き放題 。クラウドに好きなだけ写真も保存可能。
> プライムを無料で試す