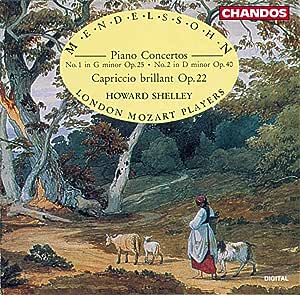 Mendelssohn's First Piano Concerto is much more popular, and more frequently played, than his Second. When you listen to this disc, you'll find out why. The First is an inspired piece with memorable themes, enjoyable but not ostentatious display for the piano, and a great sense of fun. The Second has unmemorable themes and a similar style without conveying the sense of fun. For that matter, I've never thought much of the Capriccio brillant, a rather empty showpiece. For those who like lesser Mendelssohn better than I do, this disc is very well played throughout, although the piano takes Howard Shelley's attention away from conducting and the orchestral playing isn't as distinctive as the piano playing. --Leslie Gerber