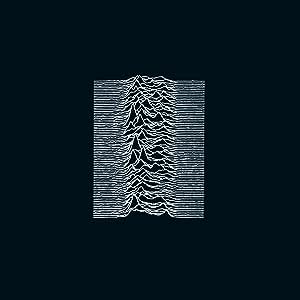 Import 180-gram vinyl pressing. Unknown Pleasures is the debut studio album by English rock band Joy Division, released on 15 June 1979 by Factory Records. The album was recorded and mixed over three successive weekends at Stockport's Strawberry Studios in April 1979, and was produced by Martin Hannett who incorporated a number of unconventional production techniques into the group's sound. The cover artwork was designed by artist Peter Saville, using a data plot of signals from a radio pulsar. It is the only Joy Division album released during lead singer Ian Curtis's lifetime.

Andrew Mckim
5つ星のうち5.0 Breathtaking!
2019年6月16日に英国でレビュー済み
Amazonで購入
Simply put - I was blown away with this pressing! - Everything about it portrays quality and attention to detail.

The depth and clarity of sound on this release, for me, enhanced the pleasure of listening to one of the greatest albums from one of the greatest bands ever! Every throb of Hook's bass, the intensity of Ian's voice, every snare, beat and kick of Morris' drums - the atmospheric, spacious sounds of Sumner's guitar and keyboards - all truely resonate throughout each track with clarity and intensity - adding to the listening experience. The album sounds fresh energetic and alive. Several times I found myself literally having to catch my breath! I listened to the whole album from start to finish stood in the middle of my room - transfixed, lost in the moment and wishing I was once again looking over the industrial warehouses of Manchester instead of the rolling fields in Cornwall! If you buy only one album this year make sure it is this!

Listening to this pressing of the album caused me to fall in love with Joy Division all over again. The added bonus being, that I feel sure that I will feel the same when I listen to it tomorrow, the next day and the next... you get my drift! Fingers crossed that Closer has the same treatment on it's anniversary release! If you are lingering over the add to cart button - don't! Just press and look forward to listening to and owning one of the best albums ever.... enjoy!
続きを読む
22人のお客様がこれが役に立ったと考えています
違反を報告
レビュー を日本語に翻訳する

The Punk Panther
5つ星のうち5.0 I remember nothing...
2018年9月21日に英国でレビュー済み
Amazonで購入
I distinctly remember first seeing Ian Curtis singing with Joy Division on "The Old Grey Whistle Test" for the first time and just thinking "what he hell was that?". This totally wired-up, frankly disturbed-looking weird bloke jerking, as if electrocuted, to a dense, throbbing sombre beat. It all seemed most bizarre and it took me a while to get into Joy Division. Indeed, I have probably appreciated them more in the last twenty years or so than I ever did at the time, when, for a while they simply weren't for me. That said, this was a completely innovative, ground-breaking piece of work and has rightly been acknowledged thus in the subsequent years.

Magazine and Public Image Ltd had started the whole "post punk" thing, but this pretty much wrote the handbook. Dark, brooding, industrially heavy rhythms. Scratchy, metallic guitars. Thumping, sonorous drums. Rumbling deep bass. Introspective, creepily haughty-sounding vocals. It is all so atmospheric and evocative of those dark evenings of 1979-1981. Even the cover is monochrome and full of foreboding.

Not much had been recorded like this before - the rhythmic but disturbing "Disorder" hits like a steam hammer. "Day Of The Lords" continues in the same vein. Just listen to that huge bass on the morose, enervating "Candidate". Also the doom-laden portentous lyrics. It all seems to point to some sort of miserable apocalypse, with the population dying in its own depression.

"Insight" has an intoxicating, deep throbbing rhythm and some wonderful electronic sound effects a minute or so in, as the insistent guitar and programmed drum beat continues, inexorably, like some nightmare you can't shake off. The "when we were young" bit brings to mind Roxy Music's "If There Is Something". "New Dawn Fades" has echoes of David Bowie in places on the vocals. Or maybe Bowie's later work had echoes of this? "She's Lost Control" has always been a favourite of mine, with its eighties electronic percussion sound and beguiling vocals.

"Shadowplay" is another good one. The whole sound influenced so many "electronica" bands. Ultravox's "Vienna" album is full of influences from here as is much of Gang Of Four's material. Peter Hook's bass on "Wilderness" is simply sublime. Booming but melodic in its massiveness. "Interzone" is as rocking as they ever get, with a faster drumbeat and a punky vocal. Things slow down for the spooky, "Heroes"-esque "I Remember Nothing" that also has real hints of The Doors' "The End" about it and some weird breaking-glass noises too.

This album is certainly no uplifting one, but it gets under your skin and you become oddly addicted to it.
続きを読む
23人のお客様がこれが役に立ったと考えています
違反を報告
レビュー を日本語に翻訳する

G.
5つ星のうち5.0 She's Lost Control- Excellent and the gang!
2019年6月16日に英国でレビュー済み
Amazonで購入
Next best thing to the 1979 ruby red translucent seeing it's a 40th anniversary. Great sound and love the black inner and white textured cover.Good it has the limited edition 40th anniversary sticker in there as well. I had a copy of this record once that was an import reproduction and sounded a bit faded. However, this is spot on!

She's Lost Control sounds super loud the way it should be

Nice Record to have

ClifB
5つ星のうち5.0 Amazing album and good reissue
2019年6月27日に英国でレビュー済み
Amazonで購入
I own a repress of this album from some years ago and have always regarded it as a superb piece of work from the post-punk era.

Joy Division simply sound like no other artist and the sparse, dark style of both music and vocals was hugely influential and is a gripping listen. Many tracks are outstanding and all others are at least very good.

Although not remastered again (based on 2007 remaster) this repress has much quieter surface quality than my existing copy, with less surface noise and far fewer pops, ticks and crackles. I always wet clean my records from new and I have a very revealing system which is ruthless of poor quality mastering and pressing.

There are no frills here...no extra liner notes, no booklet, no extra tracks, just the superb original album, this time in red vinyl in a reversed tonal scheme sleeve....black on white instead of white on black.

It is one of those essential albums and comes somewhere in my top ten of all time.
続きを読む
7人のお客様がこれが役に立ったと考えています
違反を報告
レビュー を日本語に翻訳する

O'Casey
5つ星のうち4.0 Where will it end..?
2020年1月27日に英国でレビュー済み
Amazonで購入
Bought the original album on it's release in 1979. As an 18 year old it instantly went to the top of my list of life-changing albums and remains there to this day. Anyone thinking of buying it won't need me to tell them what an astonishingly brilliant musical achievement it is.
However, to look specifically at this release; I was suckered into buying the 40th anniversary edition by all the nostalgia hype but was also hoping it might represent an uplift in sound quality from the 40 year old vinyl I still possess. I have to say the ruby red vinyl is rather striking, with a depth of colour not usually associated with vinyl pressings but I do remember, back in the day when coloured vinyl was the latest thing, the received wisdom was that the sound quality it offered was inferior to traditional black vinyl. I suppose, for an industry which had spent decades perfecting the quality of it's vinyl production to optimise sonic performance, adding coloured pigment was a bit like throwing a bag of sand into the mix.
I was prepared to accept that technology may have moved on, however, and gave it a run out. First impressions were OK but not overwhelming, so I did a direct side-by-side comparison with my original copy and was shocked. I could instantly hear that the 40 year old vinyl sounded distinctly better. Production sounded more transparent and definitely more punchy. The edgy, brittle attack of Stephen Morris's drum sound behind Hooky's rolling bass lines, instantly reproducing the impression I'd had as a teenager of a door being held open to to an undiscovered and gloriously dysfunctional Narnia.
But, as I say, that was my 40 year old copy and with the accompanying digital download sounding over-compressed (as all downloads do when you put them next to vinyl) the best I can say about the 40th anniversary edition is that it goes well with my room decor.
Perhaps this is, ultimately, where it all ends.
続きを読む