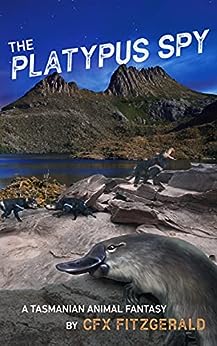 英語版 CFX Fitzgerald (著) 形式: Kindle版
すべての形式と版を表示
Sorry, there was a problem loading this page. Try again.
A platypus sets out across the Bass Strait towards the island state of Tasmania, aiming to recover part of the Ayerstone from the former convict prison of Port Arthur. This magical stone has caused certain animals to increase in size, and Preston soon finds many dangers and obstacles. Oceans are swarming with sharks, electric rays and giant squid, while Tasmania has been overrun with vicious devils who are causing havoc for quolls and other native marsupials, ruling from their base atop isolated Cradle Mountain. Half the island belongs to predatory thylacines, who emerged from forest hiding places years before, conquering the capital and surrounding lands. Both dasyurids have formed cruel extremist societies. Preston the platypus must find a way between these carnivores, using his skills at keeping undercover, while seeking new alliances and encountering other dangerous foes.

The semi-aquatic platypus swims through highly contrasting waterways from the rough rapids of the Franklin, to the serenity of Lake Pedder beside its quartzite beach. He visits underwater shipwrecks full of seahorses, plus sponge gardens and kelp forests with weedy sea dragon lairs. Tasmania’s beautiful rivers are also inhabited by crayfish, trout, handfish and galaxias, with their own motivations, instincts and agendas. Other odd and mysterious creatures dwell in remote locations, including velvet worms, pseudoscorpions, stygobites, crickets, tiger cats, owls and more unique birdlife which the platypus has to deal with in different ways.

As Preston explores, he discovers the missing Ayerstone fragment may have caused a strange magic to affect wild places, such as an intricate labyrinth near Lake St. Clair and a bubbling cauldron on the Franklin River. His quest takes him to many scenic locations in remote wilderness: the rugged Overland Track, caves of shining glow worms at Marakoopa, forests of ancient Huon pines, and the lofty dolerite sea cliffs of the Tasman Peninsula. In several towns, human structures provide their own challenges and difficulties, like a deep abandoned gold mine or an apple crate warehouse on the wharf at Beauty Point. Also he searches the cities of Hobart and Launceston for clues, visiting structures taken over by animals: breweries, factories, sports grounds, the state parliament and other buildings. Finally he must scour the gaol complex at Port Arthur to achieve his goal of recovering the Ayerstone.

Chris is interested in fantasy, adventure, Australian wildlife, nature, history, old maps, art and drawing. After a variety of odd jobs, an arts degree and attempting to be an artist, he spent time bushwalking where he was encouraged by several kangaroos and kookaburras to start writing down their story. Other native animals have provided inspirational assistance while he took part in various volunteer activities at the zoo, aquarium and nature reserves. --このテキストは、paperback版に関連付けられています。